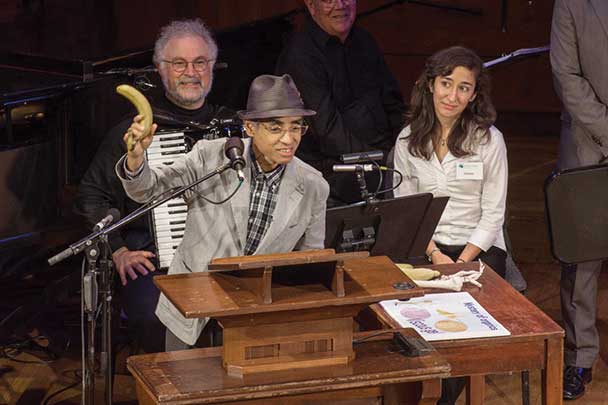 Kiyoshi Mabuchi brandishes a banana after winning this year's Physics Prize for studying the frictional coefficient of slipping on a banana peel.

Research into banana frictional coefficients, magnetically aligned dog defecation, and the neuroscience of seeing Jesus in burnt toast were among the offbeat topics honored at this year’s annual Ig Nobel award ceremony, held on September 18 in Cambridge, Massachusetts. The awards honor “science that makes you laugh then makes you think,” especially research that sounds silly or inexplicable at first, but that often has a kernel of legitimate science.

The winner of this year’s physics prize went to Japanese researchers Kiyoshi Mabuchi, Kensei Tanaka, Daichi Uchijima, and Rina Sakai, for their investigations  “measuring the amount of friction between a shoe and a banana skin, and between a banana skin and the floor, when a person steps on a banana skin that’s on the floor.”

Mabuchi, who was on hand to receive the award, hopes to use their findings to develop better ways to reduce friction in human joints. “This is a banana, everybody knows you,” Mabuchi sang as he accepted the prize.

Sabine Begall and her team from Germany, Zambia and the Czech Republic were honored with this year’s biology prize for their work showing that when dogs defecate, they prefer to align their bodies along the Earth’s magnetic field.

“We had 50 dog keepers who went out with their dogs. We had in total 70 dogs, and they went on their usual walk. [The keepers each] had a compass, and then they observed the dogs when they did their business and they noted the head direction of the dogs [bodies],” Begall said. The team collected their data over two years in a range of weather and other conditions. Hynek Burda, the primary investigator and dog walker, was blindfolded as he led the dogs on their walks so as not to inadvertently influence the direction they would chose to face.

Other large mammals, such as red foxes, have also shown some ability to detect the Earth’s magnetic field. However, because foxes are wild animals and difficult to work with, the team hopes that domesticated dogs can yield insight into how these animals can sense which direction is north.

Scientists often scoff at reports of the face of a famous person appearing in a piece of toast or a water stain. However Kang Lee of the University of Toronto wanted to see if there was a reason that these supposed manifestations were so widespread.

“We are looking at the phenomenon in perceptual psychology called face pareidolia, seeing nonexistent faces in everyday objects,” Lee said. “The question we had was if that was a brain anomaly or was that the normal perceptual process?”

He had his subjects look at a series of images with random blotches on them. For half of his subjects, he told them there was a face embedded in the image, while for the other half he never mentioned anything about a face. Of the people to when he suggested the idea of a face, 100 percent of them identified faces on at least one of the images shown to them.

After scanning his subjects with an FMRI machine, he found that because recognizing faces is so important to human interaction, there is a section of the brain dedicated to just that. In addition, this brain machinery is so responsive and suggestible that it leads to a lot of false positives.

“That means that our beliefs, our expectations are very, very strong. It actually can influence strongly our perception of the world because we tend to believe what we see is what is real out there.” Lee said. “But sometimes what we see is really what is up there in our head because the frontal area of the brain is regulating the visual cortex, which is in the back part of the brain.”