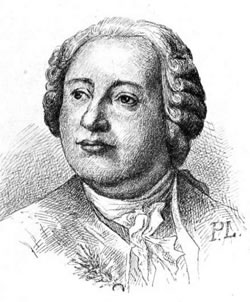 Mikhail Lomonosov was born November 19, 1711 into the family of a relatively free “state peasant”-turned-fisherman in a Northern Russian village near Archangel. In pursuit of opportunity he escaped from home at the age of 19 with just two of his favorite books of Grammatica and Arithmetica.

After 800 miles and 5 weeks of snowy and frosty roads as part of a sleigh convoy with frozen fish, he ended up in Moscow, where, after telling a lie of necessity that he was a son of nobleman, he was admitted to the Slavic-Greek-Latin Academy of the Spassky Monastery. Half-starving on a stipend of 3 kopeks a day, in just 4 years he finished an 8 year course in Latin, Greek, Church Slavonic, geography, history, philosophy and the Catechism. From there he was sent to Sankt Petersburg Academy of Sciences (“the Academy”) to continue his education among the 12 best students in 1736.

In the fall of 1736, the Academy sent Mikhail to Germany. At the University of Marburg for three years he studied mathematics, chemistry, mining, natural history, physics, mechanics, hydraulics, and humanities with Christian Wolff (1679-1754)–a renowned encyclopedic scientist and philosopher, and a key follower of Leibniz–who came to highly regard Lomonosov’s abilities.

After spending 1739 in Freiburg studying practical mining with Johann Henckel, Lomonosov married Elizabeth Zilch and returned to Russia in 1741. There, on the merits of his numerous excellent study reports regularly sent from abroad and a glorious poetic ode to Empress Anna, he received an appointment as an Adjunct of Physics in the St. Petersburg Academy. He was the first native-born Russian Academician elected in 1745 and served as a member of Academy’s Chancellery, in charge of all scientific and educational activities and departments, from 1757 till his death on April 15, 1765. Lomonosov was elected an honorary member of the Swedish Academy of Sciences (1760), the St. Petersburg Academy of Arts (1763), and a member of the Bologna Academy of Sciences (1764).

Sankt Petersburg Academy of Sciences was founded in 1724 by a decree of Peter the Great (1672-1725) who was advised by Leibniz. Though being totally dominated by foreign-born scientists, the Academy started off very well, attracting such notable scientists as Daniel Bernoulli (1700-1782) and Leonhard Euler (1707-1783).

At the time of Lomonsov’s return from Germany, the Academy had lost almost all of its talent, including Euler and Bernoulli, due to poor governance and budget inconsistencies. Lomonosov fiercely fought the situation, trying to get it back on the track set by Peter the Great. He succeeded in this challenge by increasing the number of scientific publications in Russian (in addition to Latin and German), and by insisting the Academicians deliver regular lectures in Russian. The result was a significantly increased number of Russian academicians as well as interns and students in the Academy’s Gymnasium. In 1755 he founded Russia’s first University in Moscow, now named after him.

The polymathic nature of this titan of the Russian Enlightenment can be gleaned from the content of his Complete Works: vols. 1-4–works on physics, chemistry, astronomy; vol. 5–mineralogy, metallurgy and geology, vol. 6–Russian history, economics and geography, vols. 7-8–philology, poetry, prose, vols. 9-11–correspondence, letters and translations. The depth of his insights is even more remarkable. Just in natural sciences alone, Lomonosov performed by himself more than 4000 chemical tests in Russia’s first national laboratory and championed explanations of all physical and chemical phenomena on the basis of corpuscular mechanics in a continuous ether; he coined the term “physical chemistry” in 1752 and thought of absolute cold as a condition where the corpuscles ceased their linear and rotational motions.

Seventeen years prior to analogous results by Lavoisier, Lomonosov experimentally proved the law of conservation of matter by showing that lead plates in a sealed vessel without access to air do not change their weight after heating (1756); based on the results of the first quantitative experimental studies of electricity in 1744-1756–which were quite dangerous as his colleague Georg Richmann was killed by ball lightning and Lomonosov himself “miraculously survived”–he proposed an original theory of atmospheric electricity that went beyond Franklin’s, and explained with it lightning and the polar lights. Looking for a way to send meteorological instruments and electrometers aloft, he designed and built the first working helicopter model (1754). This used two propellers rotating in opposite directions for torque compensation and, powered by a clock spring, managed to lift itself slightly.

During the transit of Venus on May 26, 1761 Lomonosov discovered the atmosphere of Venus by observing a bright aureole around the planet at the ingress and egress, and gave a detailed optical explanation of the effect by refraction. Thirty years before Herschel, in 1762, he invented and built a practical reflector telescope of a new type with the primary mirror tilted by 4 degrees so he could view the formed image directly in a side eyepiece; later that same year he invented a siderostat mechanism which allowed tracking of the stars by tilting a flat mirror in front rather than the entire 40-foot telescope.

Widely recognized as the foremost name in the history of Russian science, Lomonosov was, however, not well known in the West because among his contemporaries, the enormous breadth of his achievements, e.g., his works in grammar, mosaic art and especially poetry, outshone his work in Natural Philosophy. The lack of awareness was also due to the weak national scientific community till the late 1800’s, to the lack of personal contacts with the West (except Euler), and, partly, to his relatively short life. His tercentennial is being celebrated statewide in Russia in 2011.