Science Journalism Can Save Lives 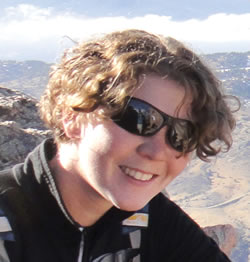 Ed. Note: Each year, as part of a program run by the American Association for the Advancement of Science, APS sponsors two media fellows, who spend the summer at a media outlet, learning the craft of science writing. Sometimes this leads to a career in journalism; sometimes it produces a scientist with a more nuanced understanding of how the media operate. In the following article, one of the 2011 APS media fellows, Helen Chappell, recounts her experience. An article by media fellow Sophie Bushwick appeared in last month's issue.

For me, it’s not much of an exaggeration. My summer as a science reporter at the Raleigh News & Observer certainly taught me valuable lessons, but one story I wrote helped me to figure out what triggered a dangerous allergic reaction.

The story’s focus wasn’t very glamorous: ticks. A community organizer wanted us to help raise awareness about Lyme disease in the state, and my editor agreed that an article informing readers about tick-borne diseases would be both interesting and in line with the paper’s public service mission.

As I began researching the story, I found that the state legislature had just passed a set of budget cuts dismantling a program to study the population of disease-carrying tick species. My story morphed into an obituary for a research program. As a scientist, it frustrated me to be writing about valuable research only as it was ending. I interviewed the state’s medical entomologists as they were literally packing up their laboratory.

Fittingly, while they spun out horror stories of tick bites and bizarre illnesses, I was scratching a tick bite I had received on a weekend walk in the woods.

One of their strangest tales was the story of a forest ranger who’d eaten meat his whole life, until he got a tick bite and suddenly couldn’t eat beef. He wasn’t alone, they told me; an immunologist in Virginia had discovered that certain tick bites triggered a severe allergy to a sugar found in mammalian meat. Though it was fascinating, the meat allergy never made it into my final story.

The story’s focus on budget cuts propelled it onto the front page and into our sister paper, the Charlotte Observer. Though it wasn’t my best work, readers responded in droves. Some were grateful that I had highlighted an important research program; others saw it as an attack on the legislature. One woman even called asking for medical advice about a tick bite.

The huge response made me realize in a concrete way just how much our society depends on the media. Science journalism provides an especially critical service, connecting the public with information that would otherwise be inaccessible. But with print journalism’s recent struggles, that information is vanishing from view.

Many papers can’t afford to cover science–I was the only science reporter at the News & Observer–but at the same time, the public can’t afford to lose access to it. Scientists and science journalists both must work to keep science in the public eye.

About a month after my story ran, while I was hooked up to an IV in the emergency room, I realized I hadn’t done that as well as I’d hoped. I’d had a potentially life-threatening allergic reaction, and from my tick research, I was able to pinpoint a hamburger and my earlier tick bite as the cause. I avoided a second reaction, but my readers, who never heard the story that I did, wouldn’t have been able to connect the dots so easily.

This is why it scares me to see science fade from print media. Knowledge of science can change lives–it may well have saved mine–but if that knowledge isn’t accessible, we are all at risk.