Ig Nobels May be not so Crazy After All 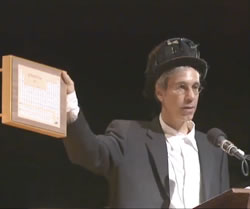 Master of ceremonies and co-founder of the Ig Nobels Marc Abrahams shows off this year's prize, a miniature periodic table.

In keeping with its 21-year tradition, this year’s Ig Nobel prizes honored research into some of the most pressing questions in science. Research ranging from yawning turtles to the ideal concentration of wasabi spray was honored at this year’s award ceremony on September 29.

The winners of the Physics prize got to the bottom of an issue that’s been plaguing the sports world for millennia. In the Olympics, discus throwers are often beset by dizziness after launching their projectiles while hammer throwers are exempt from this affliction, and now for the first time scientists know why. Winners Philippe Perrin, Cyril Perrot, Dominique Deviterne and Bruno Ragaru from France and Herman Kingma of the Netherlands interviewed athletes and analyzed slow-motion video of the athlete’s different throws. They found that while the two throws appear similar, hammer throwers keep their eyes focused on their seemingly stationary hammer while discus throwers don’t have the same visual anchor point to focus on.

“We are very happy to accept the Ig Nobel prize. As we understand it is something that deals with research that at first glance seems funny. We accepted it to show that our research is not funny at all. We are very serious researchers who are trying to figure out how the balance system works,” Perrin said in a video statement at the ceremony (they were unable to attend in person).

Perrin’s somewhat tongue in cheek speech alludes to the motto of the Ig Nobel Prizes, which “honor[s] achievements that first make people laugh, and then make them think.” The idea is to highlight scientific research that on the surface might sound wacky or trivial, but on further investigation gets at something more serious.

Such is the case with the wasabi spray that won the chemistry prize, which was shared by seven researchers from Japan. After much experimentation, they perfected the ideal concentration of five to 20 parts per million of pungent horseradish spray that is needed to wake up a sleeping person.

“We examined 50 subjects including deaf people,” Imai said, “We sprayed an odorless compound at first, and we confirmed that they maintain sleep. Second we sprayed out the real stimulant and observed their arousal level and movement. They wake up within three to four minutes.”

The reason; they wanted to develop a new smoke alarm that can wake up people with hearing disabilities. Current techniques use bright flashing lights or vibrating beds, which work sometimes, but not always.

Safety also had been on the mind of John Senders of the University of Toronto on whom was bestowed the Public Safety award. In the 1960s he developed a technique to determine how long one can safely drive without actually seeing the road. He did this by painting over the clear visor of a motorcycle helmet so the driver can’t see through it. The visor is connected to a servo that flicks it up and down over the driver’s eyes, and that times how long someone keeps the visor down.

For decades Senders’s research was largely forgotten. However, after the invention of cell phones, GPSs and other electronic devices that often distract drivers, his method to time how long someone can drive while distracted took on new importance. The International Standards Organization now uses a variation of his technique, termed the occlusion method, to set a standard for how long an in-car device can distract a driver.

Anna Wilkinson, Natalie Sebanz, Isabella Mandl and Ludwig Huber shared the Physiology Ig Nobel for proving that red-footed tortoises aren’t subject to contagious yawning. Many biologists thought that contagious yawning is a sign of intelligence, because it is a subtle way of learning. The team showed that while tortoises are very intelligent creatures that can solve mazes and puzzles, yawning was not a good measure of their intelligence because they are completely asocial creatures and cannot teach things to each other.

The Peace Prize was awarded to Arturas Zuokas, mayor of Vilnius, Lithuania for “demonstrating that the problem of illegally parked luxury cars can be solved by running them over with an armored tank.” Two Australian researchers, Darryl Gwynne and David Rentz won the Biology Prize for their research into why a particular species of beetle mistakenly tries to copulate with empty beer bottles. The Psychology Prize was awarded to Karl Halvor Teigen of the University of Oslo for his investigations into why people sigh. John Perry of Stanford received the literature prize for his book “How to Procrastinate and Still Get Things Done,” but he was unable to attend the ceremony because he had too much work piled up.

The Medicine prize was split between two teams for research that showed in certain circumstances, having to go to the bathroom makes people make better decisions, but in other circumstances it makes them make worse decisions. The Mathematics Prize was likewise shared amongst Dorothy Martin, Pat Robertson, Elizabeth Clare Prophet, Lee Jang Rim, Credonia Mwerinde and Harold Camping, all of whom predicted the world was going to end, for “teaching the world to be careful when making mathematical assumptions and calculations.” No one came to collect that prize.

The theme for this year’s award ceremony was “Chemistry” and featured a mini-opera about chemists in a coffee shop and several renditions of Tom Lehrer’s “Elements Song.” The award given to the Ig Nobel winners was a miniature Periodic Table table.