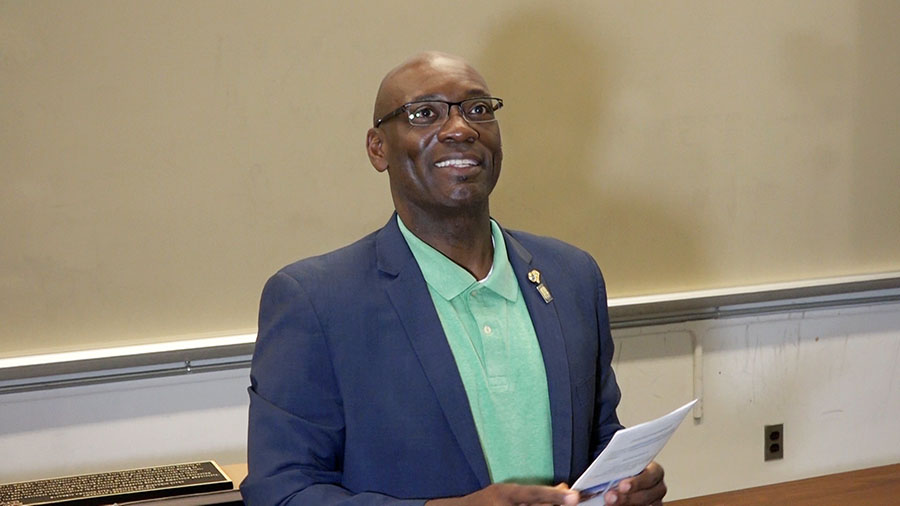 Dr. Willie Rockward, Chair of the Physics Department at Morgan State University, during a celebration after the university was named an APS Historic Site.

For physicist Sylvester James Gates, Jr., Morgan State University in Baltimore is a special place: It’s the birthplace of the National Society of Black Physicists (NSBP).

Gates—the Clark Leadership Chair in Science at the University of Maryland, Past APS President, and Past NSBP President—attended his first NSBP meeting during the early 1980s in Philadelphia.

“It was the first time I had been in a meeting with a significant number of African-American physicists, talking about doing physics, discussing physics education, and expressing the excitement of being in the field,” he said.

NSBP was formed on April 28, 1977, after some prominent physicists, including Nobel Prize winner, William Shockley, claimed that people of African heritage were intellectually incapable of succeeding in a logic and mathematically-enable field like physics.

“African-American APS members petitioned the organization’s leadership for a statement denouncing this,” he said, but no such statement was forthcoming.

Black physicists realized the need to advocate for themselves—and so began NSBP, which started as an annual meeting and grew from there. Ronald E. Mickens, Distinguished Fuller E. Callaway Professor of Physics at Clark Atlanta University, played a leading role in moving the group forward. Walter Massey and James Davenport served as the organization’s first president and secretary-treasurer, respectively. Membership in the NSBP has always been open to all who support its goals.

Morgan State seemed the natural home for NSBP; the university has a rapidly growing physics department and is close to other prominent historically Black colleges and universities.

Recently, Morgan State was named an APS Historic Site, an honor that recognizes NSBP’s importance to the history of physics. A plaque noting the honor will be hung in the university’s Physics Department.

“I was totally surprised and amazed,” said Willie Rockward, who serves as Physics Chair at Morgan State and is a past NSBP President. “To have APS and our entire physics community recognize this important moment in our history is much appreciated and respected.” Mya Merritt, a junior engineering physics major at Morgan State, said NSBP was integral to her decision to pursue a STEM career.

“I attended an NSBP conference in 2021 as a high school student when I was looking at colleges and was indecisive as to what major I should pursue,” she said. “I learned a lot during the conference and gained an interest in physics.”

Buried nearly a mile underground, SURF is the deepest underground research laboratory in the United States—and the place where, in 1965, Ray Davis, a chemist from Brookhaven National Laboratory, discovered that the sun shines because of nuclear fusion. Initially, some scientists were skeptical of the discovery, as Davis’s experiment detected only about a third of the number of neutrinos predicted by theorists. But he persevered, and in 2002, was awarded a share of the Nobel Prize for Physics.

In a news release, Mike Headley, executive director of the South Dakota Science and Technology Authority, which manages SURF, said: “[Ray Davis’s] legacy lives on in experiments around the world and in our efforts to educate the next generation of scientists and engineers.”

APS also recognized the Bevatron as a historic site. For nearly 40 years, it reigned as one of the world’s largest and highest-energy particle accelerators, designed to speed up protons to billions of electron volts. In 1954, physicists Emilio Segre and Owen Chamberlain, of the Berkeley Lab and University of California, Berkeley, used the facility to confirm the existence of antimatter by producing anti-protons.

“The Bevatron site designation is a symbol of what teams of people from many fields of science, engineering and operations can do when they work together across disciplinary boundaries to solve a problem—in this case unlocking the mysteries of the atom,” said Berkeley Lab Director Mike Witherell, in a news release following the APS historic site ceremony.