Scholar of Phase Transitions Dies at 90

Michael Fisher, a statistical physicist who excavated the secrets underlying critical phenomena across physics, chemistry, and biophysics, died November 26, 2021 at 90.

Fisher’s contributions to statistical physics earned him a share of the 1980 Wolf Prize with Leo Kadanoff and Ken Wilson, as well as a trove of other awards, including the American Chemical Society’s Irving Langmuir Prize and the inaugural APS Lars Onsager Prize. He was also a Fellow of the Royal Society and APS.

“Michael was certainly one of the most influential people in statistical mechanics—due mostly to his own work, but also to his sharp analysis of others' work, and his students,” said Joel Lebowitz, a mathematical physicist at Rutgers University and a longtime colleague.

Fisher applied his mathematical rigor to problems ranging from superfluid helium to molecular motors. Perhaps most notably, he worked with Ken Wilson and Ben Widom on the renormalization group—a crucial conceptual advance that clarified the universality of critical phenomena like phase transitions, and had enormous implications for other areas of research, like quantum field theory.

“I do think he should have won the Nobel Prize,” said Andrea Liu, a professor at the University of Pennsylvania and a former graduate student of Fisher’s. She wasn’t the only one—in a 1982 Physics Today article, Wilson remarked that he was surprised to be getting the prize without Kadanoff and Fisher, who had introduced him to critical phenomena. 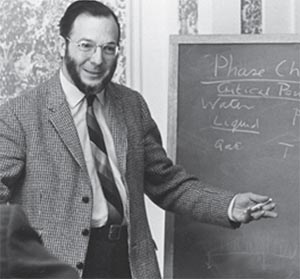 Michael Ellis Fisher was born in 1931 in Trinidad to Jeanne and Harold Fisher, who were there while Harold was working for Shell Oil. Michael was educated primarily in Britain, and at King’s College London, earned first his bachelor’s and then in 1957, his doctorate, on analogue computing, under Donald MacKay.

At King’s College, Fisher met two people who would change his life: Cyril Domb, who introduced him to critical phenomena, and Sorrel Castillejo, a math student born in Spain. Fisher and Castillejo bonded over Spanish music, and within a few years, they married. With her, Fisher had four children, two of whom also became physicists.

In 1966, Fisher moved to Cornell University where he was a professor of physics, chemistry, and mathematics. He stayed in Ithaca for two decades, among a cadre of condensed matter physicists working in both theory and experiment. Then, in 1987, Fisher moved to the University of Maryland, where he stayed until retiring in 2012.

Throughout his career, Fisher applied his talents to a variety of problems, including polymers, magnetism, and fundamental questions in statistical mechanics. But it was the entire range of critical phenomena that drew him in: condensation, surface behavior such as wetting, and phase diagrams of all kinds.

“Things are not what we might expect,“ Fisher said at a recent colloquium. “That’s the first thing that underlies the theory of critical phenomena.” He was fascinated by the sharp transitions that occurred when ferromagnets passed their Curie point, and vapors reached critical opalescence. He was especially interested in why criticality seemed to be universal across different systems, even as the size of the system changed dramatically.

Because of his theoretical insight and deep attention to experimental data, Fisher “was the person everyone went to, to figure out what was happening in critical phenomena,” according to Wilson. One of the most important features in critical phenomena was known to be the dimensionality of the system. Wilson’s renormalization group was a brilliant advance, but it had to be calculated numerically for a system like a three-dimensional Ising model. In 1972, Fisher worked with Wilson to develop continuous dimensionality, a mathematical tool that tamed the recursion relations so they could be calculated analytically.

Later in life, Fisher became interested in the biophysics of molecular motors. “He would go to conferences, and present posters—I find that horrible for me to do at my stage—but Michael was ever the student, he just went and he carried his poster,” said Dave Thirumalai, a professor of chemistry at The University of Texas at Austin.

In addition to an unforgiving work ethic, Fisher treated academia as sacrosanct and held himself and others to scrupulous standards. “Michael was kind of, if you wish, the terror of the statistical mechanics conference,” said Lebowitz. “He would always sit in the front row, take notes and ask sharp questions.”

Fisher was infamous for the red pen that he used to correct errors and make suggestions, as N. David Mermin and Neil Ashcroft wrote in the acknowledgement to Solid State Physics, “often making our lives very much more difficult by his unrelenting insistence that we could be more literate, accurate, intelligible, and thorough.”

Though his exacting standards could make Fisher a challenging mentor, learning from him was valuable, according to Liu. “It wasn't something you could take for granted in those days, but he treated me exactly the way he would have treated a male student,” she said. “Gender was never something that entered into any scientific discussion. When we talked science, it was science.”

Fisher was known for frequently helping younger researchers without taking credit, and a meticulous level of organization, whether it was ordering food for a table or finding student records from decades past, Lebowitz said.

Beyond physics, Fisher taught, played, and wrote about Spanish guitar, applying the same level of intensity and rigor as he did physics.

In one of his recurring columns for BMG Magazine, “The Art of Flamenco,” Fisher discussed performance factors, weighing the pros and cons of seemingly minute details: “The correct length of the thumb nail needs more consideration and I will take this up again in a later article,” he concluded.