Jim Bellingham’s first expedition to the Arctic took him, in his words, “a long way from doing superconductivity on the second floor at MIT.” Bellingham, now the director of the Center for Marine Robotics at the Woods Hole Oceanographic Institution, remembers carrying a gun on that trip to northern Alaska to protect himself against polar bears. That expedition started the Ph.D. physicist-turned-marine-roboticist on an adventurous path.

Bellingham didn’t always have his eye on the ocean. He credits his interest in marine science to a chance meeting with Harold Eugene “Doc” Edgerton, a professor of electrical engineering at MIT. Edgerton was experimenting with underwater cameras in Boston Harbor in the 1980s when Bellingham was a physics graduate student at MIT. 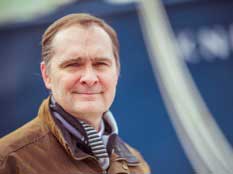 Edgerton invited Bellingham along on his boat one day, and Bellingham became hooked on the idea of using instrumentation like autonomous underwater vehicles (AUVs) to explore an unseen part of the world. “That led to me taking a class in sonar systems,” Bellingham says. When Bellingham finished his thesis in experimental physics, he received several job offers in low-temperature physics, including a coveted one at IBM. “Jobs were raining from heaven,” he says, “but I wanted to try something else.” The ocean was calling.

Bellingham soon accepted a position running the MIT Sea Grant AUV Laboratory. He and his team tested their first underwater vehicle—the bright yellow, roughly 80-pound Sea Squirt—in the nearby Charles River in early 1989. (Bellingham once traded a four-stroke outboard motor in exchange for space at one end of the MIT sailing pavilion dock to launch Sea Squirt.)

Sea Squirt paved the way for new vehicles capable of diving deeper and for longer periods of time: Bellingham and his colleagues next produced Odyssey, a vehicle rated to a depth of 6,000 meters. In 1992, Bellingham and his colleagues took Odyssey to Antarctica and tested the vehicle and its underwater video camera—stuffed inside a scuba tank that had been cut in half and outfitted with an acrylic cover—in the Bellingshausen Sea, near Palmer Station, and in the Drake Passage. The researchers photographed the bottom of the ocean and captured images of penguins streaking through the water.

Bellingham and his team built on the success of that expedition to design another vehicle, Odyssey II, capable of diving under sea ice and returning to a hole in the ice for retrieval. The MIT Sea Grant AUV Laboratory eventually produced six Odyssey IIs, but Bellingham was eager to keep developing new vehicles. “Once you become successful, everyone wants you to keep doing exactly what you’ve been doing,” he says. “It becomes really hard to break loose.”

Bellingham found his next challenge in entrepreneurship—in 1997 he co-founded a private company, Bluefin Robotics, to develop underwater vehicles. Nearly his entire team from MIT joined him, including his secretary, which helped to ease the transition into industry. Bellingham worked hard to land new clients, including those from the oil and gas industry and the military. Bluefin Robotics’ flagship vehicle, the Bluefin 21, was a versatile platform whose payloads and batteries could be easily swapped out, says Bellingham.

In 1999, Bellingham accepted a job as Director of Engineering at the Monterey Bay Aquarium Research Institute (MBARI). There, he oversaw the development of the Monterey Accelerated Research System, an array of scientific instruments on the seafloor connected to the mainland by a 52-kilometer-long cable.

After 15 years at MBARI, Bellingham returned to Massachusetts to be the director of the Center for Marine Robotics at the Woods Hole Oceanographic Institution. He likens part of his current job to being an event organizer. “I’m trying to build communities of ocean scientists,” Bellingham says, “and foster initiatives that are bigger than just one underwater vehicle or research project. I’m building a sense that we’re all pulling together.”

Bellingham left superconductivity behind long ago, but he’s proud to be a physicist. “Physics gives you a foundation,” he says. Bellingham credits the physicist mindset with helping him succeed as an entrepreneur and director of large teams. “It’s often easier for physicists to take a step back and look at the bigger picture.”