Approximately 2,000 members strong, the APS Division of Biological Physics (DBIO) supports all of the ways physical science can help understand biological systems—from nanoscale biological proteins all the way up to organisms and their behavior. Research within DBIO encompasses not only what physics can elucidate in biology, but also what biology can reveal about physics: After millions of years of evolution, biological systems are rich with processes that showcase, for example, mechanics, geometry, and quantum physics in interesting and unexpected ways.

Current DBIO chair Jennifer Ross, associate professor of physics at the University of Massachusetts, Amherst, and an APS Fellow, says the division is a natural home for self-proclaimed “big tent physicists” like herself. “What has allowed us to thrive is that we’re very open to new fields that are part of biophysics, and we’re not too controlling about precisely what ‘biophysics’ or ‘biological physics’ means,” Ross explains. 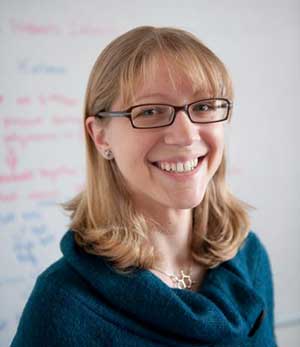 Consistent with this open approach, DBIO is a notably interdisciplinary division, and one that draws many non-physicists into the APS community. Members are affiliated with a broad range of academic departments—including biochemistry, engineering, neuroscience, mathematics, and medicine, in addition to physics and biophysics. As DBIO member Moumita Das, associate professor of physics at the Rochester Institute of Technology, put it, “Nature doesn’t care about boundaries. If you want to solve some of the outstanding problems in nature, you can’t do it with just your knowledge of chemistry or biology or physics—you have to step across these disciplines and collaborate with other people.”

DBIO’s broad lens on biological physics has been a key feature of the division’s culture since its founding in 1973. Princeton University professor and APS Fellow Shirley Chan was a graduate student at the time and recollected that DBIO was established “essentially out of frustration” by physicists whose forward-thinking ideas about applying physics approaches to biomolecules weren’t widely embraced by the scientific communities in either physics or biology at the time.

An early pioneer in studying the spectra, structure, and dynamics of proteins and nucleic acids, Chan remembers the 1970s as an interesting era in physics, with many well-established nuclear and solid-state physicists shifting their interest toward biological systems—particularly the puzzle of how to comprehensively model the function of proteins and enzymes.

Her advisors, Hans Frauenfelder and Peter Debrunner, were two of the earliest examples. Their laboratory at the University of Illinois Urbana-Champaign studied the ligand effects of heme proteins in different oxidation states, by enriching the heme’s iron with a radioactive isotope to make it detectable with Mössbauer spectroscopy. Later, the focus shifted to the dynamics of heme protein’s binding to oxygen and carbon monoxide. Chan was among the graduate students tasked with developing flash photolysis methods to approach this topic, and other pioneers applied magnetic fields to study the quantum spin dynamics of biomolecules, ultimately leading to the development of magnetic resonance imaging.

Chan recounted that the Frauenfelder laboratory, and others pursuing similar lines of physics-based experimentation on biological systems, had difficulty publishing this work in the available biochemical and biophysical journals in those years, and were met with skepticism when presenting about these topics at the Biophysical Society Meetings. Without a niche in any existing academic society, a group of senior APS members decided to form a new division to cultivate this new subfield of physics, and the Division of Biological Physics was born.

Nearly 50 years later, what questions is DBIO now tackling? The research of Ross and Das provides an interesting cross-section. The research carried out in the Ross lab explores the microtubule cytoskeleton and how it facilitates cells’ remarkable capacity for self-organization. Microtubules both provide mechanical structure to support the shape of cells, and comprise tracks coupled with motor proteins that facilitate intracellular transport. Understanding fundamental properties of this system is a question that draws upon soft, active, and biological condensed matter physics. It also has implications for disease, as breakdown in the microtubule network underlies a host of cancers, brain abnormalities, and neuromuscular diseases.

Das’ research examines the underlying principles and mechanisms that lead to the toughness of articular cartilage—a millimeters-thick material that, remarkably, routinely bears up to 10 times one’s body weight over 100-200 million loading cycles, all without fracturing. A better understanding of this exceptionally tough biological material could help inform the development of materials for tissue engineering, tissue repair, and even soft robotics.

Other open questions in biological physics, always hot topics at DBIO’s sessions at APS Meetings, include the mechanics of how brain tissue buckles to form wrinkles, the biomechanics of immune response, and the quantum biology of photosynthesis. “Science is not stagnant,” noted Ross, “DBIO has been able to thrive by encouraging new and different aspects of biological physics.”

DBIO has also left its mark at the highest levels of biomedical research. Lobbying from DBIO researchers led the National Cancer Institute to establish a network of 12 Physical Sciences Oncology Centers in 2009. These have since led to breakthrough insights into the role of biomechanics in cancer metastasis and a valuable rise in statistical- and mechanics-based thinking in many NCI-funded studies.

The division’s spirit of inclusivity applies to its scientists as well as its science: DBIO features some of the highest participation from women and under-represented minorities in the APS community. Placing this proportion at well over 20 percent, Ross noted “We’re a diverse and welcoming division of APS, and that’s very visible.” A distinct point of pride for DBIO is that this diversity goes beyond mere membership: The division works actively to ensure that women and underrepresented minorities—as well as early-career researchers—are well-represented in working group sessions and business meetings, as speakers at APS Meetings, and in division leadership. As it stands currently, DBIO’s 12-person Executive Committee boasts a 50/50 split between men and women. “At DBIO you’ll see the difference. Not only how many women and underrepresented minorities are present, but how many are speaking up,” said Das.

Overall, DBIO stands out as one of APS’ most lively and community-driven divisions, with plenty to offer members in terms of support, inclusivity, and encouragement. More information on the division can be found on the website.