A Big Tent for Soft Matter 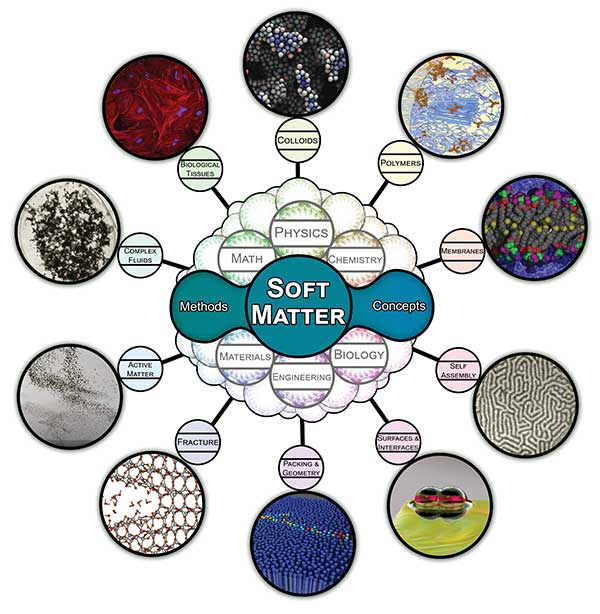 It was my first APS March Meeting and I was invited to join a group of soft matter physicists from the University of Chicago for dinner. At the restaurant, I ended up in the last open seat and while waiting to order, chatted with some friends from the previous summer’s soft matter workshop hosted by the University of Massachusetts Amherst physics department. Working my way through the conversations, I eventually turned to my right and saw an unfamiliar face. He was older, grayer, sporting coke-bottle glasses, and seemed to have an open air about him. Smiling, I introduced myself with,

His smile turned to a look of amused stoicism as my question sank in. He responded in a voice loud enough to be heard from across the table and stern enough to attract attention from those nearby,

Either I wasn’t thinking straight, or just felt goaded on by the question. Regardless, I gave an overly honest response:

The older gentleman grinned at my complete failure of diplomacy and through a full-bellied laugh, managed to get out,

We were both laughing at this point, and the conversation continued from there. This is how I met Heinrich Jaeger, long-time professor at the University of Chicago’s James Franck Institute, leader in the field of granular physics, and, as it turned out, the person who bought dinner for everyone that night.

This story illustrates two points: First, the field of soft matter physics is full of fun, animated, and quirky personalities, a definite plus for anyone who enjoys such company. Second — and from anecdotal evidence, I think this applies broadly to our field — I didn’t know I wanted to be a soft matter physicist until I was already a soft matter physicist. After all, if I had known anything about the field before joining, I wouldn’t have asked such an ignorant question! Now that APS is home to GSOFT (aps.org/units/gsoft), the topical group on soft matter physics, I think this second point deserves a bit more attention. Why? Well, I noticed over the course of my Ph.D. and into my postdoc that despite being an intellectually rich field of research, many physicists don’t actually know what soft matter is, what it isn’t, and how it relates to some of the more established branches of physics. Though I found my way into the field by a combination of coincidence and luck, a broader awareness has to be raised so future generations of bright and talented physics students can find their way too.

With this idealistic vision in mind, I’ll confess that in preparing this article, I was warned that any attempt to concretely define soft matter would likely be met with failure. The boundaries are nebulous, topics diverse, and the practitioners widely distributed across academic departments. All of this is true, but nevertheless, there is a clear community with a common language. Because of this reality, I’ve come to view soft matter as less of a walled city built around specific questions, and more of a big tent party that encompasses diverse views and paths of inquiry. Along these lines, I’ve heard stories of young soft matter physicists introducing themselves to colleagues in high energy physics, cosmology, and even hard condensed matter, where a typical conversation often goes something like this:

Soft matter is neither biophysics nor polymer physics, though these research topics can and do come under “the tent.” A list describing this scientific coalition based on several leading conferences identifies some major hubs of activity:

Active and driven matter explores systems of particles that interact with each other while consuming energy. This is a valuable test bed for studying collective dynamics in nonequilibrium systems ranging from vibrated grains of sand to motile bacteria and animal flocks.

Colloids are a mainstay of the soft matter community. The ability to image and track these micron-sized particles in experiments enables direct tests of fundamental thermodynamics, phase transitions, self-assembly, and suspension rheology. Moreover, they have numerous real-world applications including flexible electronics and drug delivery.

Dynamics of structured and complex fluids is a subject similarly at the roots of the soft matter. These solid-liquid, solid-gas, liquid-gas, and liquid-liquid suspensions, to name just a few, exhibit unusual flow behavior that can be attributed to microscopic internal structure.

Fracture and failure have become topics of broader interest for their role in phenomenology beyond linearized continuum theories. For example, fracture depends critically on the concentration of energy in materials, and hence non-equilibrium microscopic dynamics. Failure, on the other hand, has more to do with mechanical instabilities — buckling, wrinkling, and snapping — that are widely utilized in biological pattern formation.

Membranes, vesicles, and droplets are relevant to problems in biophysics where regulated flow of molecules between the external environment and internal cellular machinery are critical for survival. More broadly, understanding both how confined fluids fluctuate, deform, and pinch, as well as the consequences of these structural changes, still holds unsolved questions.

Packing, geometry, and topology covers not a specific material system, but a broad set of organizational principles. Jamming in granular systems, arrangement of colloids on spheres, topological defects in liquid crystals, and finite deformations of linkage structures are just some of the problems that benefit from these deeper mathematical ideas.

Polymers, like colloids, are at the heart of soft matter. Recognized with the 1991 Nobel Prize in Physics awarded to Pierre-Gilles de Gennes, this topic builds on an understanding of statistical mechanics and chemistry to explain mechanical properties. Remarkably, even Feynman diagrams have been introduced to polymer theory to help understand the multitude of interactions governing these systems.

Self-assembly describes the processes by which individual units come together to form organized structures. Whether mediated by individual particle interactions or globally applied external fields, the principles of self-assembly can be found widely across soft matter.

Surfaces and interfaces can be found whenever two phases come into contact. As with hard condensed matter, the physics of systems under confinement reveals dimensionally-dependent scaling laws and nontrivial modifications to existing theories. Self-assembly, colloidal chemistry, diffusion, and biophysical problems all stand to learn from these studies.

A useful way to think of soft matter is as an amalgamation of methods and concepts that, within the standard university organizational structure, are spread across physics, chemistry, engineering, biology, materials, and mathematics departments (see figure). The problems that soft matter then examines are the interdisciplinary offspring that emerge from these otherwise distinct fields. Remarkably, the frontiers of soft matter are flowering at both ends in physics departments across the world: Fundamental physics has found a fresh avenue to look for “new ħ = 0 physics,” in strongly-interacting and non-equilibrium systems, while applied physics is forging new connections to industry and other branches of science. In fact, some of the most exciting work is coming from the most extreme fringes, where research questions struggle to fit into even the diverse range of topics described above. It seems, therefore, that for the foreseeable future the “big tent” of soft matter will continue to get bigger.

I stated above that I didn’t know I wanted to be a soft matter physicist until I already was one. Largely, this is because I didn’t know what soft matter was or what it involved before starting my graduate research. As a young postdoc with limited perspective, it’s still premature of me to make statements about what I’ll be doing 5, 10, or 15 years from now. However, I do know this: I’m excited. The future looks bright. And now that GSOFT established a home for soft matter within APS, it’ll be exciting to see how the community continues to grow.

Jesse L. Silverberg is a postdoctoral research fellow at the Wyss Institute for Biologically Inspired Engineering, Harvard University. He received his Ph.D. in experimental soft matter from the Department of Physics, Cornell University, where he studied the connection between geometry, mechanics, and microstructure. Jesse has received significant support for his research as an NSF Graduate Research Fellow, an IGERT Fellow, and a Matthews Fellow.