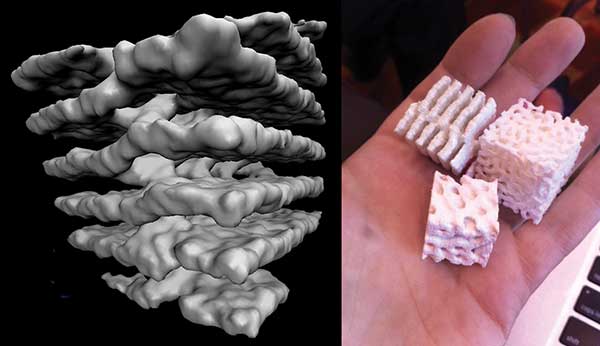 APS April Meeting 2015, Baltimore — Neutron stars contain some of the densest matter in the universe, second only to black holes. Astrophysicists say that these compact, Manhattan-sized remnants of stars have a thin, 100-meter crust whose structure resembles different kinds of noodles: strings of protons and neutrons, smashed together like flour and eggs in a pasta press.

At the April Meeting, graduate student Matt Caplan gave an update on the research conducted in a group led by Charles Horowitz at Indiana University. This team of theoretical physicists uses supercomputer simulations to explore the dense nuclear “pasta” (see left side of figure) — “the region where things get weird,” as Caplan calls it. Though he can’t make real neutron star matter here on Earth, Caplan printed out 3D models of it (see right side of figure).

Caplan and his colleagues recently showed that nuclear pasta has regions where the noodles are disordered. These are sites of electron scattering in the neutron star crust that lower the electrical and thermal conductivity of the star, causing it to remain hotter longer.

Caplan showed off another food-like substance hidden in the neutron star: waffles, so named for their similarity to the grid-like depressions in the familiar breakfast food. “The waffles are significant because they mark one of the first identifications of a pasta structure outside of what was predicted in the original theory papers on pasta,” says Caplan.

The new discovery comes thanks to improved computer power: The specific structure of the pasta depends on the temperature, density, and the number of protons. Varying these parameters revealed the waffles. (Add more protons, and the waffles turn to lasagna.)

The Horowitz team is now trying to learn if the crust can support pasta mountains. On a neutron star, a mountain the size of a coffee cup would have the mass of Mount Everest. That means a spinning lumpy neutron star could be a very energetic source of gravitational waves.