Environmental Physics at the April Meeting 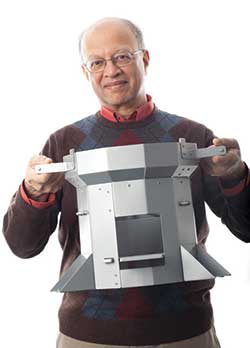 APS April Meeting 2015, Baltimore — Presenters at the April Meeting highlighted the role that physicists can play in combating climate change. Researchers shared ways to reduce carbon emissions in the developing world, innovate new techniques to harness the sun’s energy, and even extract carbon dioxide from the air.

The APS Forum on Physics and Society honored Berkeley physicist Ashok Gadgil for his work improving global health and the environment. One of the projects he spearheaded was the Darfur Stove — a cheap and efficient wood stove first distributed to refugees at camps in Sudan.

He designed the stoves to maximize their energy efficiency, conserving the wood fuel, a scarce resource that is dangerous for people to collect in arid northern Africa. At Lawrence Berkeley National Laboratory, Gadgil and his team designed and tested a $20 sheet-metal stove that could be inexpensively shipped all over the world.

He estimates cooking with the stoves saves two tons of carbon per stove per year compared to the traditional method of heating a pot raised on three stones over a small fire.  So far, the nonprofit that manufactures and distributes the stoves, Potential Energy, has dispensed more than 46,000 of them throughout the region and plans to send another 5,000 by the end of the year.

Ari Glezer of the Georgia Institute of Technology is developing a clean, renewable energy source that induces and harnesses the power of desert whirlwinds, colloquially known as dust devils. “Right now dust devils form spontaneously,” Glezer said. “The idea here is to create a prescribed number of them.”

The dusty vortices start swirling after a layer of warm air forms just above the surface of the sun-baked ground. The layer of air starts to rise, but small disturbances easily produce spinning vortices of warm and cool air.

The assembly expends no energy to create the artificial dust devil. Glezer and his team built a bladed structure that looks like the inside of a water turbine, which directs the rising warm air into a spinning vortex, artificially inducing a dust devil. With a fan attached to a generator at the top, the team has been able to harvest usable electricity from the rising air.

His team built the first Solar Vortex machine in Atlanta then shipped it to Mesa, Arizona, last summer for the first round of successful field tests in the dry air. They’re planning on testing a five-meter-diameter version this August.

The hope is that this kind of electricity generation could be competitive in cost with conventional wind energy. It’s also not affected by changing wind speeds and less impacted by clouds than traditional solar energy.

Glezer and his team are also looking to test whether humid air would work in the Solar Vortex. Both the Department of Energy’s ARPA-E and the Department of Defense have supported his research, and he hopes to commercialize his work starting in 2016.

ARPA-E is also pursuing other avenues to improve conversion of sunlight to electricity. Howard Branz, the Department of Energy’s ARPA-E program director for solar energy, offered some insight into spectrum splitting, possibly the next big game-changer for solar power.

He highlighted the work of a group at Caltech that uses special mirrors to split white light into its constituent wavelength in order to hit photovoltaics optimized for specific wavelengths ranges. He said that this technique might boost a solar cell’s efficiency from about 35 percent to nearly 50 percent.

Other teams are taking the idea a step farther. For example, after the sun’s visible light is absorbed, the remaining infrared radiation is directed at a thermal collector.

“There’s lots of advanced optics going on at ARPA-E,” Branz said. “We need the advances for buildings, solar power, dry cooling of power plants, all kinds of things.”

For other researchers, generating electricity without producing carbon dioxide isn’t enough. Concerned about the ever-increasing amount of greenhouse gases in the atmosphere, Klaus Lackner is developing new membrane materials to remove carbon dioxide from the air. He is working on a device that can theoretically absorb carbon dioxide 1,000 times faster than a tree.

“We want to show that the air capture side can actually scale to a viable size … commensurate with what we need to do,” Lackner said. “We can take CO2 out of the air and bury it.”

Last year Lackner founded the Center for Negative Carbon Emissions at Arizona State University, where he and his team have been working on different prototypes to efficiently and economically remove carbon dioxide.

His team has been experimenting with different device designs and anion exchange resins that bond with carbon dioxide. The resins are currently used for water purification, but are ideal for carbon capture because the carbon dioxide can be washed out in ordinary water for sequestration and the resin reused.

The prototype he’s been developing uses a truss-like structure resembling chicken wire in order to maximize its surface area. He hopes to get a working prototype on the roof of their building in the near future.

“These things are entirely passive, they can be made out of smaller units and they are entirely mass-producible,” Lackner said. “The raw material is very, very cheap.”

However, the challenge of scrubbing the atmosphere of excess carbon is formidable. Lackner estimates that it would take 100 million of his full-scale, shipping-container-sized scrubbers to fully offset the amount of carbon dioxide that has built up over the last 200 years.