Every year, APS News looks back to see which physics news stories grabbed the attention of the public. This list is not necessarily a compilation of the most important advances or discoveries of the year, but rather the ones that seemed to garner the most headlines and column-inches. In (roughly) chronological order, the top ten physics stories of 2014 were: 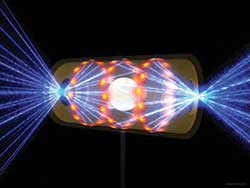 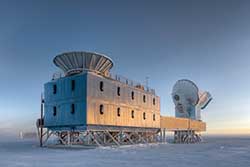 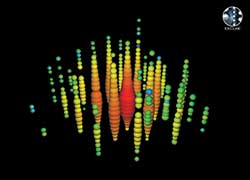 Fusion Milestone
Physicists at Lawrence Livermore National Laboratory announced in February that they reached an important milestone: At the National Ignition Facility, 192 simultaneous laser pulses blasted tiny hydrogen pellets, and the resulting fusion reactions emitted slightly more energy than was initially absorbed — a key first step in inertial confinement fusion. However, there is still a long way to go before the machine produces a net gain in energy, since the pellets absorbed only a small fraction of the incoming laser energy.

BICEP2
In March the scientific team behind the BICEP2 telescope at the South Pole made the sensational announcement that they had seen the first evidence of “B-mode” polarization in the cosmic microwave background (CMB) radiation. At the time it was held up as “the smoking gun” for evidence of gravitational waves left over from a period of rapid inflation in the early universe. However, soon after the announcement, doubts about the data started to emerge, and it was unclear if the team could definitively rule out the effect of cosmic dust. In the resulting scientific paper, published in June, the team acknowledged that dust may have affected the observations, but nevertheless they still felt the gravitational wave signal was real. In September a new report from the ESA’s Planck satellite reinforced concerns about the initial results, but the two teams are continuing to work together to resolve the discrepancies. Also in December, independent of the BICEP2 research, Planck’s team announced that they had finished processing the data from the satellite’s four-year run and had created the most detailed map of the CMB.

Intergalactic Neutrinos
In 2013, the IceCube neutrino detector at the South Pole observed additional highly energetic neutrinos, which provided further evidence of neutrinos from outside our galaxy. A new event announced in April, dubbed “Big Bird,” unseated the reigning champs “Bert” and “Ernie.” At more than two petaelectronvolts, it’s twice as energetic as the previous record-holders, but because it’s not anything like an order of magnitude greater, investigators think that they might be close to seeing the upper limit of cosmic neutrino energies.

Physics in Movies
2014 was a blockbuster year for science on film and TV. Premiering in March, Neil deGrasse Tyson’s highly anticipated follow-up to Carl Sagan’s TV series Cosmos captivated audiences and took them on a journey into the universe. Also in March, the documentary Particle Fever was released across the country, offering an intimate look at the lives of CERN’s researchers hunting for the Higgs Boson. The life of Stephen Hawking got the Hollywood treatment in the critically acclaimed film The Theory of Everything, as did mathematician Alan Turning in The Imitation Game. After years of development, the film Interstellar hit the big screen. Inspired by physicist Kip Thorne’s theories of gravitation and relativity, it wowed audiences with its impressive visuals of black holes and time dilation.

Element 117
Ununseptium, the placeholder name for element 117, was spotted for an instant in Germany in May. At the GSI Helmholtz Centre for Heavy Ion Research in Darmstadt, scientists bombarded a berkelium target with accelerated calcium atoms to create the short-lived artificial element. This follows up on an experiment in Russia in 2010 that first created the element, confirming its existence and likely paving the way for its official inclusion on the periodic table of the elements. In addition, one of the isotopes of lawrencium discovered in the process had a half-life of nearly eleven hours, giving physicists hope that experiments might be bringing them close to the hypothesized shores of the “Island of Stability” for super-heavy elements.

Galactic Black Hole
In 2012, astronomers discovered a mysterious massive object falling towards the giant black hole at the center of the Milky Way galaxy. They predicted that its observed elliptical orbit would bring it closest to the black hole around mid-summer and were primed to watch the predicted fireworks of the object being ripped apart. Instead, it was more of a fizzle. Originally thought to be a giant gas cloud, the object might actually harbor a large star in its center, which would have held the cloud together in the face of the enormous gravitational tidal forces. Based on its trajectory, there’s a chance that in a few decades the hypothetical star will pass through the dust and gas surrounding the black hole, and maybe then scientists will witness the show they had hoped for.

Ebola’s Potential Spread
As the Ebola virus ravaged West Africa, researchers worried about its potential spread started mapping its transmission. Physicist Alessandro Vespignani of Northeastern University used computer models to simulate the movement of people throughout the world and the ways the disease might spread. His dire conclusion in August was that if nothing was done, tens of thousands of people could be infected within months. Fortunately, a lot is being done to combat the outbreak, which according to the Centers for Disease Control so far has resulted in just over 6000 deaths.

Nobel Prizes
Without winning the Nobel prize in their own field, physicists did well in October anyway. The physics prize went to two engineers and a materials scientist, one from the United States and two from Japan, for their work developing the blue light emitting diode. After the quick invention of the red and green LED, an efficient blue device took nearly twenty years to produce. The following day, physicists from the United States and Germany won the chemistry prize for the development of super-resolved fluorescence microscopy, which pushed the limits of optical microscopy down to the nanoscale.

Space Exploration
This fall, interplanetary exploration was a central focus of the world’s space agencies. In October, India made headlines by successfully placing a small satellite into Martian orbit, only the fourth space agency to do so and more cheaply than any other Mars mission to date. On November 12, the European Space Agency’s Rosetta space probe dropped the its tiny Philae lander onto the surface of the comet 67P/Churyumov-Gerasimenko, but its operational life was cut short after the lander bounced off its planned landing zone into a shady crater. Without functioning solar panels, the reserve battery discharged, but not before the lander carried out 80 to 90 percent of its scientific mission. This included a startling discovery announced in December that the isotopic content of the comet’s water molecules didn’t match that on Earth, rekindling questions about where our planet’s water originated. Also in December, NASA successfully launched a prototype of Orion, its new spacecraft designed to take astronauts into Earth orbit and beyond.

Tabletop Accelerator
In December, scientists at Lawrence Berkeley National Lab announced a new world record for a compact particle accelerator. The team used a tabletop-sized laser-plasma accelerator to energize electrons up to 4.25 GeV. Though not nearly as powerful as the massive LHC, the tiny BELLA accelerator can do in about one meter what would take CERN 1,000 meters. Physicists hope that this emerging compact accelerator technology will pave the way to new generations of particle colliders.