Galileo Would Have Been Proud 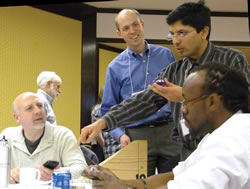 As Jesse Southwick (standing, left) watches, Ashwani Kumar (standing, right) of Monmouth College measures the time it takes for a marble to roll down an inclined plane. Southwick and Aaron Osowiecki, both of Boston Latin School (founded when Galileo was still alive) gave a presentation at the PhysTEC Conference on “Ramps and Bungee Cords: Bringing It Together” that showed how students could “discover” conservation of energy by modeling their own data.

This year’s annual conference of the Physics Teacher Education Coalition (PhysTEC) was held March 16-17 in Baltimore, Maryland as a satellite meeting of the annual APS March Meeting. Over 75 universities and colleges were represented by 119 attendees.

The conference began with an opening plenary by Richard Steinberg, Program Director of Science Education at City College of New York. Steinberg, a professor of physics and education, presented his experiences during a sabbatical year in which he taught physics in a New York City public high school. He described his transition from introductory college physics instructor to teacher education program participant, which involved taking courses that he himself had previously taught, and shared both frustrating and positive experiences with his students. Steinberg said his experiences as a high school teacher give him more credibility as a professor, and reinforce his methods of teaching physics by inquiry.

Building on its involvement in the 2012 PhysTEC conference, the American Chemical Society (ACS) had a more prominent role this year as a conference cosponsor. Jacob Clark Blickenstaff, APS Teacher Education Program manager and a conference organizer, said, “I was very pleased with the partnership with the ACS and the inclusion of chemistry teacher educators in this conference.” Featured workshops on chemistry included parallel sessions on the Chemistry Teacher Education Coalition, course design, and learning chemistry in cooperative groups.

Michael Marder’s lunch plenary titled, “Nothing Makes Sense in Physics Education Except in the Light of Poverty,” included data on the many factors that affect teacher preparation. Marder, the Associate Dean for Science and Mathematics at the University of Texas at Austin, emphasized that trends are more striking when data are disaggregated by lower income versus higher income students.

The conference featured a number of parallel sessions and workshops on topics including induction and mentoring, course reform, innovative practice, recruitment and retention, and sustaining reform.

Clark Blickenstaff noted that Catherine Good’s talk on stereotype threat generated a great deal of interest in the community. Good, an Assistant Professor of Psychology at Baruch College, addressed stereotypes that affect the achievement of females and minorities in STEM disciplines, and described research-based interventions to help students overcome the impact of these negative stereotypes.

The conference closed with a panel session on the implications of the Next Generation Science Standards for teacher preparation. Panelists included Helen Quinn of SLAC, Melanie Cooper, Andy Jackson, and Ramon Lopez of the University of Texas at Arlington.

The PhysTEC conference is the nation’s largest event focusing on physics teacher preparation, and is a major component of the PhysTEC project. The PhysTEC project, a partnership between APS and the American Association of Physics Teachers (AAPT), strives to improve and promote the education of future physics teachers. It does so primarily by selecting colleges and universities that can effectively use substantial project support to develop their physics teacher preparation programs into national models and make significant increases in the number of teachers they graduate.

To date, the project has supported 29 such sites, and recently announced the funding of four additional sites: University Central Florida, University of Cincinnati, Georgia State University and North Carolina State University. The number of teachers graduating each year from PhysTEC-funded institutions has greatly increased since the project began in 2001.

The 2014 PhysTEC Conference will be held May 19-20 in Austin, TX in conjunction with the UTeach Conference.