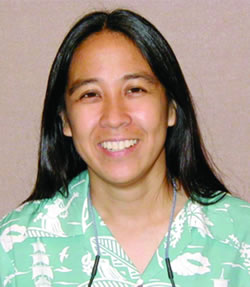 The day after Christmas 2004 began in a typical non-eventful manner for most of the planet. But in the early morning hours in Indonesia, an earthquake with a magnitude of 9.1-9.3 struck off the west coast of Sumatra. The resulting vicious tsunami was one of the worst disasters in recent human history, causing 230,000 deaths in 14 nations surrounding the Indian Ocean.

In Honolulu, Hawaii, Laura Kong, a geophysicist by training, received a phone call 30 minutes after the earthquake from the Pacific Tsunami Warning Center (PTWC), and sprang into action. As Director of the International Tsunami Information Center (ITIC), Kong possessed expertise that was desperately needed by countries that previously never would have even expected a tsunami. “Before this, most countries in the Indian Ocean didn’t know what a tsunami was and what it could do,” she says. Further compounding the problem, “back then there was no real time data in the Indian Ocean.”

Kong and PTWC scientists on duty gathered what information they could from news reports as they urgently tried to contact Indonesian government officials. “In the chaos, all communication lines were down and no one answered the phone,” she recalls. By 8 p.m. Hawaii time, about 5 hours after the earthquake, she was finally able to solidify information and data about what had occurred. And from that point on, her life was consumed by the catastrophe. For over a month, she and her colleagues consulted almost non-stop with government representatives from affected regions, sharing and collecting data, and offering advice and information about how to set up a reliable tsunami warning system.

“The 2004 Indian Ocean Tsunami was that rare moment in my professional career that changed everything,” she says. “Prior to 2004, the tsunami warning and mitigation system was unknown. There were only a few very passionate, dedicated scientists and governments and very little research on tsunamis and tsunami warning systems. Very few governments made the hazard their top priority. But after December 26, all of their lives changed. Everyone wanted to know about tsunamis and what they could do prevent another catastrophe.”

One of the most important outcomes was the creation and installation of an Indian Ocean warning system. “In 2004, the PTWC and ITIC were the only dedicated international tsunami centers in the world, but over the last seven years we’ve tried to transition information to Indian Ocean countries and other regions so they are responsible for their own training.” The ITIC, a joint partnership between UNESCO and the U.S. National Weather Service/NOAA, serves the world, she notes. “Where there is a requirement, we help.”

Kong’s work ultimately affects policy discussions surrounding tsunami warning systems. She has helped brief government officials from around the globe as the new warning system has been developed. In fact, the favorite part of her job is the opportunity to help nations with capacity building, she says. “We can impact how well countries are able to respond, and build a network and sense of confidence in the people responsible, and this ultimately will save lives,” she says.

Kong did not envision an international career in science diplomacy when she received her bachelor’s degree in geology with a minor in physics and mathematics from Brown University. In fact she was more focused on oceanography research. She pursued a doctorate in marine seismology through the MIT/Woods Hole Oceanographic Institution Joint Program in Oceanography and spent her graduate school years on sea-going vessels. “I crossed the Atlantic, Pacific, the equator, and the poles,” she recalls.

But after receiving her PhD in 1990, Kong turned her attention to government. Following a postdoc at the University of Tokyo, she pursued public service opportunities at the Pacific Tsunami Warning Center, the USGS Hawaiian Volcano Observatory, and even the Federal Highway Administration, where she analyzed the environmental impacts of highway construction. She joined the ITIC in 2001.

Much of her day-to-day work is dedicated to appropriately communicating complex scientific information about tsunamis to governments and individuals who are laymen. One of the “hardest challenges about conveying scientific information to the public is to be able to put very technical information into a format that the public can take action on. For tsunami warnings, everything happens very quickly,” she clarifies. “There is a premium on clear information that is not confusing–that if a wave is coming, get out of the way. But to get everyone to understand and act immediately is challenging.”

Another problem Kong and her PTWC colleagues face is that during any given tsunami emergency, like the 2004 Tsunami, they probably do not have all the information immediately. “We have to react within an hour and most of the time we don’t have enough data to say we’re 100% correct.” And yet, they have to issue statements and suggestions for government leaders to convey to their own people in a way that cannot be misinterpreted by anyone in the chain, she reveals.

“At minute three [of an event], as a scientist you don’t actually know what happened,” she describes. “But our public officials want to know what happened now. And once a scientist says something, it seems to become gospel.” It can be magnified with very little data, she continues, so part of her challenge is to ensure that information is communicated in both a timely and easily understood manner. “The more you do this, the easier it gets.” To that end, she helped author a standard operating procedure for crisis warning communications.

In 2011, Kong’s team again was put to the test when the March 11 earthquake and resulting tsunami hit the east coast of Japan. “Japan has the best tsunami preparedness in the world,” she confirms. “Yet in the course of two to three hours, 20,000 people died.” The lesson, she notes, is that even with the most cutting edge technology that Japan possessed, “local tsunamis are hard to respond to successfully. The best strategy is education of local populations before. Unfortunately, the sad part is that even if you know, people are probably still going to perish if they get caught in a wave. It’s sobering to think that it can happen to Japan in a snap of a finger.”

Kong confirms that her physics background has given her a strategic avenue for deciphering these unique scientific, communications and policy puzzles. “I would say that while my geophysics expertise has been essential to advise governments, perhaps more important is that my science training has taught me to approach problems in a logical, level-headed way, something especially important during a fast-evolving tsunami emergency.”

And she wouldn’t change the way her career has blossomed. “I went to school, I thought, to do research, but what I am doing now is very different–it requires that scientific background to put things together to make sense,” she says. And her advice for physicists interested in taking the road less traveled? “Learn how to think, take in all information available, try to assess and move forward. All that physics work will help you in the future.”

Alaina G. Levine is a science writer and President of Quantum Success Solutions, a science career and professional development consulting enterprise. She can be contacted through www.alainalevine.com.
© 2013, Alaina G. Levine