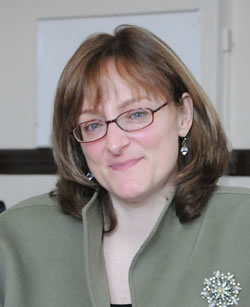 It has been clear for quite a while that physicists can’t get away with educating only white men. Since 2001 there have been more foreign citizens in our PhD programs than US citizens. We’ve broadened our admissions to keep quality high, to keep our physics programs strong. Of course, these foreign students are often European or Asian men, so in some sense, our embrace of diversity has not changed the face of physics very dramatically. For graduate physics education in the 21st century, we will have to expand our “big tent” to include more diverse participants if we hope to keep quality at the highest possible level.

As the population becomes more diverse, it also becomes increasingly difficult to justify the selection effects that result in an overwhelmingly white, male student population in our graduate classrooms. Women remain below 10% of active physicists, and no more than 20% in the youngest, most diverse ranks. The latest AIP data, from 2008, show women receiving 18% of the physics PhDs granted in US institutions. People of color represent a much smaller fraction; for example, fewer than 3% of US citizens receiving PhDs are African-American and Hispanic. For comparison, together African-Americans (12.6%) and Hispanic Americans (16.4%) represent more than a quarter of the US population. By 2043, according to the U.S. Census Bureau, our country will be majority minority.

I am suggesting graduate education must diversify not just because of fairness or equal opportunity, although that certainly ought to concern us, but because it’s vital for physics.

Why Diversity is Vital for Physics
The first statement of the problem is simple: if we for any reason exclude from our laboratories and classrooms more than 60% of the population (roughly, half being women, a quarter being racial minorities), we are limiting the bright minds who could bring their talents to bear on some really tough problems. Absent compelling evidence that those excluded are less capable, this is not smart.

But there is an even better argument for increasing diversity and inclusion, based on research on the roots of innovation: in discovery fields there is a competitive advantage to greater diversity among practitioners. As Sheila Tobias pointed out to me 20 years ago, great civilizations have often arisen at the intersection of trade routes, where people of different societies encountered new ways of thinking. That is, the conflict of ideas stimulates new and better ideas.

More concretely, research shows that diverse groups are more creative and develop solutions to problems that are judged–by people unaware of the origin of the ideas–to be better. Much of this research has been done in a business context rather than an academic or intellectual one. However, (a) business organizations hire many physicists, and (b) business organizations are probably more aware than slowly changing academic physics departments of the influence of workplace culture on performance. So I believe this research is highly relevant to what we do.

A typical experiment is to create small groups that are, or are not, diverse in gender, race, class, or other variable(s). Each group works independently on a set problem. For example, in their article on “Ethnic Diversity and Creativity in Small Groups,” McLeod, Lobel and Cox1 posed a simple problem related to tourism and asked experimental subjects to brainstorm answers. Experts from the travel industry then graded the responses, not knowing which groups produced each idea; they judged ideas from ethnically diverse groups to be “of higher quality–more effective and feasible–than the ideas produced by the homogeneous groups.”

Experimenters also report more strife in diverse groups. It’s much easier to talk to and work with someone who is just like you. But talking to yourself about a difficult problem doesn’t add as much value as talking to someone with a different perspective.

Many experiments, with different boundary conditions, collectively find that:


What is behind these results? As McLeod et al. (1996) explained, heterogeneous groups hold a variety of perspectives. This means different ideas come into play, and perhaps the conflict between ideas challenges the group to improve its reasoning. It may also stimulate creativity. So diverse backgrounds lead to different views and in the best case, to a beneficial refinement and resolution of those conflicting ideas.

The claim that differences among people cause them to think differently is quite controversial–for example, there are reams of articles debating whether women inherently think differently than men. Without entering that debate, I think it is clear that the experiences of men and women in physics are different, as are the experiences of ethnic minorities and majorities. That is, how we approach problems, how we think about solving them, how we engage and mentor students, how we work with colleagues–in short, how we do our jobs as physicists–is informed by our individual histories. These tend to have been different for men and women, for different economic classes, for racial groups, and so on. So we have a lot to teach one another.

Perhaps we do best when we work with people who annoy us! I try to remember this when someone is really irritating me. “Hmmm,” I think (I hope), “I could probably learn a lot from this person.”

Not all conflict or diversity is beneficial. If minorities are seen as outsiders, their voices are not heard and their ideas do not hold. This is worse than had the group been homogeneous because there is the burden of conflict without the attendant benefit.

In a nutshell: more conflict plus more ideas leads to chaos (if conflict rules) or superior performance (if conflict is managed). Which situation do we want for physics?

Why Diversity Improves A Graduate Student’s Experience and Performance
In graduate education, our goal is to train bright, young people to be outstanding physicists. It is always easiest to mentor someone who is exactly like you because if you can get inside their head, you know what advice they need to hear. For example, is it good to encourage a student (positive reinforcement) or to challenge them (criticism)? My father was a professor of chemistry with a reputation for toughness. His three daughters are scientists yet none of the four women graduate students who worked with him finished a PhD (although at least one went on to a very successful career at Bell Labs, with strong backing from my dad).

Think of this issue as “impedance matching” with your students. My father treated his students as he wanted to be treated. That means that when they were going through a tough or indecisive patch, he pressed harder. This had worked well for him when he was a student. But he didn’t realize that others–like me or my sisters–might react differently in a similar situation. I remember vividly when my older sister (now a biology professor and textbook author) and I told him that that kind of approach would have meant the end of our graduate careers. We both knew we would have quit if challenged that way by our advisors. “No, no,” he insisted, “you are both too good to quit.” But we pushed back, and I like to think he learned something that day, unfortunately too late for his women students.

So, my dad (who was a great guy with a big heart) was a wonderful advisor for students with his confidence, his sense of belonging, his style of learning. He would have been a disaster as my advisor. What would happen if all professors in a department were like my dad? Or all of them were like me? It’s not good for the students.

Another way in which diversity is a benefit stems from the increasing role of teams in modern science. Today it is rare for a “rugged individual” with sharp elbows to make the big contributions. The Large Hadron Collider collaboration has upward of 5000 members and the Hubble Space Telescope is used by thousands of astronomers world-wide. Even smaller-scale “desktop” physics is typically done by collaborative groups.

Business, too, depends heavily on groups working smoothly together. Yet, much like physicists, they still hold tight to the idea of the top performer, the miracle man, the great (male) leader–even when research shows women are better team players and leaders than men.

Many physicists still cling to the image of Einstein, toiling alone in the customs office, having brilliant insights all by himself. But that is not how science happens today–and it wasn’t really ever that way, even in Einstein’s time. Working together well is critical.

Many institutions have made a lot of progress in diversifying. When I started in physics it was very rare to see women faculty; more than half of physics departments had no women on their faculty. Now, it is rare to find a department of any size without at least one woman faculty member, and many departments have done much better. There are also prominent physics leaders of color, though far fewer. But these success stories must be seen as exceptions rather than the rule. Typically they faced higher obstacles and thus probably had to perform at a higher level to succeed.

My contention (no real data) is that top men and women succeed. The difference is one step down, where men can pass through the evaluation filters and women and minorities generally cannot. We will have achieved equity when women of slightly-less-than-world-changing ability succeed as easily as men of similar ability.

Final Words
We are fortunate to work in an important, exciting field that we love. Let’s also remember that we are ideally suited to better the world. I’ll end with one final anecdote:

Two weeks into the fall term, shortly after I became department chair, one of the incoming graduate students asked to meet with me. She was thinking of leaving graduate school, she said, because she wanted to “help others.” She had spent the summer working for a non-governmental agency in South America, and felt that was much more valuable work for the rest of humanity than solving the fluid equation.

For a quick moment, I saw her point–saw how it looked to her–and realized that we are teaching students that what we do is an intellectual exercise, gratifying to ourselves and other weird creatures like us but not ultimately useful to others.

This is wrong. As the provost at a large Midwestern university once said to me (he was an economist and son of a physicist), “Physicists are a lot like economists. They think they are the smartest people on the planet; they think that if they have not addressed a problem, it has not been solved; and they think there is no problem they could not solve.” Sounds about right. So let’s put our money where our mouths are: let’s teach our students that they can solve the problems of the world, that physics tools are useful and that analytic thinking is essential. Look at climate change; biological systems; even finance. Physicists are there in the thick of it, for better and worse. There is nothing we can’t try to do. We have the training to do as much as, or more than, anyone else to address the challenges facing this nation and the world. So let’s find students who reflect the constituency and interests and concerns of the world, and equip them to make the world a better place.

Meg Urry is the Israel Munson Professor of Physics and Astronomy, and Chair of the Physics Department, at Yale University. This article is adapted from her keynote address at the APS Conference on Graduate Education on January 31.