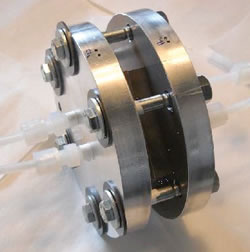 Aziz's table-tob device at the Harvard School of Engineering and Applied Sciences successfully demonstrated that quinones can store a charge, the first step towards building future flow batteries.

Scientists at Harvard are developing an inexpensive, organic-based battery that could change how the nation generates electricity. At the March Meeting, researchers reported their initial results developing batteries that store charge using quinones, carbon-based molecules found frequently in nature.

They hope that with further development, their battery design could be scaled up to industrial levels, and help make solar and wind energy more economically viable.
Michael Aziz is the head of a team, sponsored by the Department of Energy’s ARPA-E program, that is developing the new batteries. Team members are starting work on a design of new “flow batteries,” which rely on quinones suspended in water, rather than existing designs that use expensive vanadium or dangerous chlorine.

The batteries work like fuel cells. Two large tanks of liquid circulate through a central cell stack divided by a thin membrane. One fluid in the flow battery is positively charged, while the other is negative, much like the electrolytes in a traditional battery. The thin membrane in the cell stack only allows positive ions to pass through, blocking electrons and creating a current that flows through whatever device is connected to the battery. To recharge, the process reverses as electrons collect in the negative reservoir.

Researchers have been focusing on flow batteries because the amount of charge they can hold is limited only by the size of their tanks, making them ideal to store electricity generated from wind and solar power. In addition they should be able to be discharged and recharged indefinitely.

“You store the energy outside the hardware in big storage tanks,” Aziz said. “You can scale up these tanks of chemicals to be arbitrarily large.”

The problem that most renewable energy sources run into is their intermittency. Consumers’ demand for electricity varies throughout the day, being lowest during the middle of the night, higher during the workday, and having a big spike around six in the evening.

A solar plant’s output spikes around noon and tapers off in the evening. Wind power is even more sporadic. Gas and oil plants have the advantage that they can adjust their output up and down to match the changing demand.

“Nature gives us these renewable carbon-free power sources when she chooses to, rather than when we need it,” Aziz said. “If we could have the ability to store large enough amounts of electrical energy at low enough cost, then we could make wind and solar dispatchable.”

The ARPA-E grant started in February, and the team is still in the initial phases of testing which quinones work best. So far, preliminary experiments using a benzoquinone have yielded promising results, but many more tests are still needed.

At the March Meeting, Aziz and his team showed that they have been able to make flow batteries that let up to 50 milliwatts flow through a square centimeter of the cell stack’s membrane. He said that while encouraging, that number needs to be an order of magnitude greater before they can start to commercialize it.

“Exactly how to scale this up is not clear right now and there can be a lot of hiccups along the way,” Aziz said. “But if you wrote me a check for everything I needed, I think well within a decade we’d have this working.”

Although the idea of flow batteries has been around for decades, they have received renewed attention in recent years as renewable energy has gotten more popular.

Most existing designs use vanadium compounds as their electrolytes. The high cost of the metal has, however, kept the cost of the batteries high and limited their adoption. Other versions of the battery using hydrogen and chlorine have also been shown to work, but the dangers of these chemicals will likely hamper their adoption.

“These are non-toxic chemicals…. You eat them in your vegetables, so it’s possible to think about putting them in your basement,” Aziz said. “The liquid is water, so it’s not going to catch on fire.”

Aziz did caution that female cockroaches use quinones as pheromones to attract a mate. “So if we end up using this molecule in a flow battery, we probably won’t recommend it for energy storage in the kitchen.”