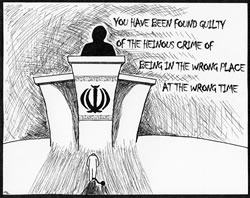 Omid Kokabee, a graduate student at the University of Texas at Austin and an APS member, was sentenced to ten years in prison in Iran. This follows 15 months of harsh imprisonment in Iran’s notorious Evin prison for political dissidents in Tehran. Without access to his lawyer, he was tried and convicted of “cooperating with Mossad in Israel.”

Kokabee was convicted on May 13, along with 14 other defendants accused of conspiring with enemies of Iran. The judge presiding over the case, Abolghasem Salavati is notorious for harsh sentences, including death sentences. He has presided over many high-profile cases in Iran, including that of the US hikers arrested in the country in 2009, the 2012 trial of an ex-U.S. Marine Amir Hekmati, and numerous students involved in the 2009 student protests. Several of the other defendants at Kokabee’s trial received death sentences.

Human rights observers and those close to Kokabee say that he did not receive a fair trial.

“It’s not really a trial in the sense that we are used to. He was not allowed to speak to a lawyer,” said Eugene Chudnovsky of Lehman College, one of the co-chairs of the Committee of Concerned Scientists.

During the trial, no evidence was brought against him. He was not permitted to see a lawyer during his incarceration or the trial, and was not told his court date until he was brought to the courtroom. During his imprisonment, Iranian security forces used harsh techniques to coerce confessions from him.

Friends and coworkers of Kokabee say that his biggest focus has always been on his science and he is not a politically active person. He was in his first year of the doctoral program at UT Austin studying lasers and optics.

The family of Kokabee says that it will appeal the decision. According to Iranian law, he has the right to appeal, but the outcome of an appeal is uncertain. Human rights observers expressed skepticism about changing his sentence.

“According to the Iranian regime’s penal codes there should be [a retrial], but whether such a thing will amount to anything, I do not know,” said Hossein Sadeghpour, chair of APS’s Committee on International Freedom of Scientists

As APS News previously reported, Kokabee was first arrested in January 2011 at Khomeini Airport while waiting for a plane to return him to the United States. He had been visiting his family in Iran over the winter break. The Iranian authorities held him in solitary confinement for 36 days and twice canceled his court appearances at the last minute.

“I think that now is the moment to really increase pressure on the Iranian judiciary and the Iranian regime from all sides,” Sadeghpour said. “His case has been a celebrated case in the United States, and now is the time to step up pressure.”