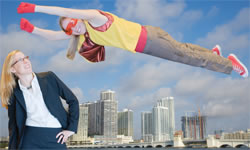 By Ken Cole & Nancy B. Karasik/APS

Watch out Superman, there’s a new superhero in town, and she doesn’t just shoot lasers from her eyes, she actually is a laser. To coincide with this year’s LaserFest, the fiftieth anniversary of the invention of the laser, APS will debut a series of comic books as part of its outreach efforts. Aimed primarily at middle school kids, the two comic books star middle schooler Lucinda Hene and her laser superhero alter-ego Spectra.

The creative force behind Spectra is physicist Rebecca Thompson-Flagg, or Becky as she is known to nearly everyone, APS’s Head of Public Outreach. She developed the characters, wrote the script, and has been instrumental in bringing Spectra to life. She’s even put together a Spectra costume for public appearances.

The comic book began as the companion piece to this year’s PhysicsQuest kit. Each year, APS sends out over 13,000 free kits to middle school classrooms across the country. The kits contain four experiments for teachers and students and an activity book with instructions and puzzles for the students. Until now, the kits have centered on the lives and discoveries of famous physicists, including Albert Einstein, Marie Curie, and Benjamin Franklin. The 2008 kits were the first to include a comic book as well. “Nicola Tesla and the Electric Fair,” featured the nineteenth century inventor and his adventures to power the 1893 Chicago World’s Fair.

For the 2009-2010 school year APS’s outreach department wanted to try something new. Instead of basing the new PhysicsQuest kit on an individual physicist, they opted to come up with a completely original character to teach laser science to kids.

“Spectra is a laser superhero,” Thompson-Flagg said, “Anything a laser can do, she can do. Anything light can do, she can do.” Throughout the course of the story, Spectra uses her powers to save her kidnapped friends from the clutches of the evil Miss Alignment, all the while learning about her newfound powers in the process. She can travel at the speed of light, change color, cut through solid metal, pass through windows, reflect off of mirrors, and diffract into multiple copies of herself.

“I want kids to buy into her as a character,” Thompson-Flagg said, “I wanted to really create a full character that can carry the story; to make her more than just a plot device.”

In order to do so, Thompson-Flagg consulted with members of Girl-Wonder.org, a network of websites dedicated to promoting positive depictions of empowered female characters in comics. Thompson-Flagg said she hoped that by making the lead character a middle school girl, she could make science more appealing to demographics that have been historically underrepresented in the field. Thompson-Flagg and APS’s Art Director Kerry G. Johnson worked together to create a diverse cast of characters for the book.

“It was very important to draw a strong progressive superhero,” said Johnson who created the artwork. He added that he hoped that children, like his own daughter in middle school, would read the book and see science as accessible to everybody, “I would like to see more children of color getting into science, physics and medicine.”

When coming up with the original designs for the characters, Johnson decided to base Spectra’s look on Thompson-Flagg herself, in part to inspire Thompson-Flagg to create as realistic a character as possible.

“It’s not Becky, but it does resemble Becky,” Johnson said, “I did take the essence of Becky.”

Though she started out as a character in the comic books, the Spectra character has quickly become the emblem for much of LaserFest’s public outreach efforts. Responses back from teachers and students who have read the comic has been overwhelmingly positive and it is already in its third printing. After it started taking off, Thompson-Flagg assembled a Spectra costume she plans to wear to outreach events.

“We’re going to stick her on everything to tie everything together,” Thompson-Flagg said, “That was not in the original plan, but we are really excited as to how it’s taken off.”

Part of the plan is use Spectra to bring the excitement of physics to new audiences. In addition to the physics and educational conferences where APS usually exhibits, the outreach team has secured space at San Diego’s annual Comic-Con next summer. The massive convention, which each year brings together over 140,000 comic book fans, will be the largest conference of any kind the outreach team has been to yet.

“We’re excited about getting the opportunity to reach a different community,” Thompson-Flagg said, “We’re going to the audience that already likes our genre.”

Securing booth space at the popular convention was no simple task. New exhibitors ordinarily have to wait up to four years before space opens up. However the convention organizers said they were looking to feature more educational comics, and offered up space in its Independent Publisher’s section, making APS the first professional organization to exhibit at Comic-Con.

Thompson-Flagg majored in physics at Bryn Mawr, and then went on to earn her PhD at the University of Texas at Austin. While there she worked on a variety of projects, including how oxygen molecules causes graphene to buckle, the theoretical surface analytics of daffodil geometry, and the flower-like patterns of silicon oxide that flow out of carbon nanotubes. Even while working in the lab, however, Thompson-Flagg knew she wanted to find ways to show the excitement of physics to kids.

“It’s the physics all around me that gets me really excited about teaching people,” she said, adding also that she loves it when kids ask thoughtful questions after having just seen a completely unexpected outcome from an experiment.

When not overseeing APS’s outreach efforts, Thompson-Flagg spends much of her spare time training for her next triathlon. Last November she completed her first Ironman triathlon, where she swam 2.4 miles, biked 112 miles, and ran a marathon. She said some of her other favorite pastimes are knitting and traditional lace making, known as tatting. Even when relaxing, physics is never far from her mind.

“The cool thing about knitting is I can see some shape then knit it,” she said about how her work in theoretical surface analytics helps her visualize what the final product will look like, and lets her work without patterns, “It totally plays on the physics I did.”