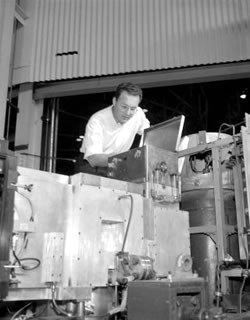 In 1912, a physicist named Victor Hess was conducting an ion chamber balloon experiment, expecting to find a decrease of ionization in the atmosphere with increasing altitude. Instead, he found just the opposite: ionization in the atmosphere actually increased with altitude. He concluded there must be radiation entering our atmosphere from space, later dubbed cosmic rays. Finding a means of detecting those particles and making the invisible visible, became a major challenge for physicists. Two men in particular rose to that challenge: Charles Thomas Rees Wilson and Donald Glaser.

The first technology invented to detect cosmic rays came from the mind of Wilson in 1895. A Scottish physicist at Cambridge University’s famed Cavendish Laboratory, Wilson was interested in the weather and wanted a means of reproducing the condensation of clouds in the laboratory. He constructed a closed vessel filled with saturated air, then caused a sudden expansion of the volume of the vessel. The resulting drop in temperature makes the air supersaturated and produces condensation. And he brought the tools of physics available at that time to bear on the challenge, most notably discharge tubes.

By 1910, Wilson was using his cloud chamber device to detect charged particles, since they would leave a trail of ions–and water droplets–as they passed through the gas in the chamber. He took the very first photographs of the tracks left by alpha and beta rays, not to mention evidence of how individual atoms and their electrons interacted. Both alpha and beta particles have distinctive tracks: the former is broad and straight, while the latter is thinner and more easily deflected by collisions with other particles. Apply a uniform magnetic field across the cloud chamber, and positively and negatively charged particles will curve in opposite directions.

But cloud chambers had their limitations for research purposes, particularly as particle physics continued to advance. They were too small, for one thing, for use at large accelerators. And the liquid density wasn’t sufficient to interact with a large number of highly energetic particles. It also had a slow cycle: the process of reactivating the cloud chamber took too long compared to the accelerator cycles.

Enter Glaser, an American physicist credited with inventing the bubble chamber, which works on similar principles to a cloud chamber, except it is filled with a superheated liquid instead of a gas. The son of a sundries salesman, Glaser hailed from Cleveland, Ohio, and was a sufficiently accomplished musician that he played with the local symphony at age 16. But his real love was math and physics, and he went on to earn his PhD from Caltech in 1950.

Legend has it that while he was on the faculty of the University of Michigan, Glaser was chilling with colleagues over a cold beer, observed the stream of bubbles in his glass, and was inspired to build a device that could track subatomic particles with bubbles. Glaser himself later refuted this story; beer was not his inspiration, although he did use it as a liquid in early prototypes.

His first device was a small glass bulb roughly the size of his thumb and initially filled not just with beer, but also soda water and ginger ale. He didn’t have much success with those liquids at capturing the trail of bubbles left by subatomic particles. Then he built a small bubble chamber in 1953 filled with superheated liquid diethyl ether, augmented with a high-speed camera to record the very first tracks of cosmic rays. He won the 1960 Nobel Prize in physics for his achievement–one of the youngest scientists to be so honored. Today’s bubble chambers typically are filled with superheated hydrogen.

Glaser moved to UC Berkeley shortly after this discovery, where he continued refining his invention. In his first two years at Berkeley alone, he collected nearly half a million photographs tracking the passage of particles through a newer, bigger bubble chamber built by his colleague, Luis Alvarez. This device was six feet long, compared to the inch-long bubble chamber Glaser first invented, and it could measure particle tracks every 14 seconds. Alvarez’ machine helped launch the era of big science in high-energy physics, and also earned its inventor a Nobel Prize.

Ironically, both Alvarez and Glaser left particle physics after their triumphs. Some have speculated they became bored and disillusioned with how automated the field had become. Glaser went on to make his mark in the field of molecular biology, researching the evolution of bacteria, how cell growth is regulated, and the causes of cancer and genetic mutation. In particular, he found that certain mutations in Chinese hamsters caused the animals to be unusually sensitive to UV light; exposure to UV rays caused the mutated cells to turn into cancer cells. The same defects can be found in humans, giving rise to a rare cancer called xeroderma pigmentosum, whereby the sufferer often can remain cancer free by avoiding exposure to daylight.

He co-founded the first biotechnology company with two colleagues in the 1970s, correctly foreseeing the explosion in applying the fruits of molecular biology research to industry, particularly medicine and agriculture. And when even that lost its novelty, Glaser moved into neurobiology, specifically studying the human visual system and its perception of motion and depth.

Glaser also used photo-analyzing equipment he’d originally developed for his bubble chamber to identify species of bacteria via computer scanning, so he brought a bit of automation to his new field as well. And while bubble chambers have been largely superseded in particle physics by later technologies such as spark chambers and wire chambers, they are experiencing some resurgence of interest in the ongoing search for dark matter particles.