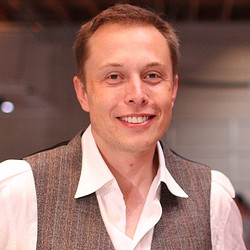 It's What He Was Good At
Elon was a geek. He grew up in a home that had foundations in engineering and science. When he was in school, physics was the one subject that he was always good at. In addition, Elon’s interest in physics was also inspired by Richard Feynman’s—a famous physicist—lectures and books.

It's Better Than Business
While attending the University of Pennsylvania, Elon pursued a double major in physics and in business at the Wharton School. While his business education was excellent, Elon admits that he definitely preferred physics.

Changing the World Online
An outspoken and highly intelligent entrepreneur, Elon is thought by some to be the personification of the Iron Man. You decide.

As a teenager, Elon knew that he wanted to work in areas concerning the Internet, space exploration, and clean energy. He began working as an entrepreneur with the Internet right after he graduated from college.

The Internet, space exploration, and clean energy are constantly changing and offer plenty of opportunities for new technology and business ventures. Two of his first ventures were Zip2, a commercial website hosting company, and PayPal, an online way to send and receive money.

After starting Zip2 and PayPal, Elon sold them. He still wanted to create reliable and affordable technology for today’s changing society. Elon used the money from selling Zip2 and PayPal to explore his other interests: space and cars.

Space Exploration: To Infinity and Home Again
Elon created SpaceX, a space transport company. SpaceX made significant innovations and advancements in getting things and people into space. SpaceX is innovative because it lowers the cost of space exploration while drawing more attention to the potential to make money in space companies.

SpaceX contracts with NASA are worth millions and millions of dollars. Elon has used his physics and business knowledge to run the company well. Not only does he manage the corporate matters of the company, but as the chief engineer for many of the company’s key projects, Elon also builds and designs many of the rockets and spacecraft.

Initially, many people doubted that SpaceX would be successful and many critics were ready to focus on the company’s every mistake, but Elon has proven that there is a place for commercial space exploration and that his company can compete with corporations like Lockheed Martin and Boeing.

As well as starting and managing SpaceX, Elon began Tesla Motors, an electric car company. Primarily, Elon serves as Tesla's CEO and, as he does at SpaceX, he is active in overseeing the product design of all Tesla vehicles from start to end. Tesla Motors' cars are not only environmentally-friendly, but they are designed with sports car appeal.

Physics Plus
With the skills and knowledge that he has gained from a physics education, his eye for design and innovation, and his business smarts, Elon is unique. In addition to his talents and gifts, he credits his work ethic, opinions, and education for his success.

Use Your Interests to Start a Career
Elon represents America’s true entrepreneurial spirit. He started businesses in areas that interested him. His fascination is what spurred his businesses.

Own Your Work
Elon could’ve easily worked for Toyota or Lockheed Martin if he wanted to simply create hybrid technology or build spacecraft, but Elon wanted to be free to expand on his ideas and bring his designs to life. He knew that he had bold goals and groundbreaking ideas that couldn’t be fully accomplished unless he was making the decisions.

Make a Statement
It’s not easy to run a company and oversee the design details of every single product, but Elon sees it more like he’s leaving his mark on the world through technological innovations.

Work Hard
Many people were skeptical of his visions and ideas, but by not giving up, Elon has shown that his designs and technology are key innovations for this century and beyond.