Doha: A Beacon for Science in the Middle East 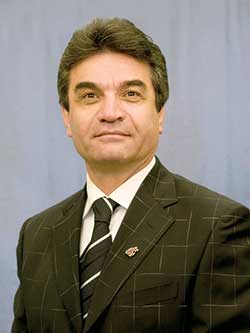 Most of the news we read and hear about the Middle East points only to instabilities and chaos in countries like Egypt, Syria, and Iraq, which have been known historically to be the scientific powers in that part of the world. However, I want to share with you some observations regarding scientific developments in Qatar that, unfortunately, do not receive the attention they deserve in the media. These positive developments present a beacon of hope for the reemergence of science in a region that was once known as a destination for scholars from afar to seek knowledge and to contribute to arts and sciences.

I visited Doha a number of times, mainly on short business trips, to attend a conference, work on research projects with my collaborators at the Texas A&M University campus in Education City, and to give lectures at research institutions. On my last trip in the fall of 2013, I asked the driver who picked me up at the Doha International Airport to drive me around the city before dropping me off at my hotel. I was curious to see the night life in the city that looked, as viewed from the plane above, like any other big modern metropolitan city, shining with lights emitted from dense traffic and high-rise buildings.

Doha indeed has become an international city, attracting business from all over the world and mixing its traditions with cosmopolitan life. This was in sharp contrast to the impressions I had during my first trip in 2005. Since then, Doha has been undergoing unprecedented growth and modernization in all sectors of its economy, infrastructure, industry and educational system. Most attractive to me is the massive investment in education and scientific research. Over the past decade, Doha has been investing heavily in higher education, research infrastructure, and national research laboratories and institutions.

In the spring of 2005, I was among a group of US scientists who were invited to attend a meeting in Doha under the banner “International Conference on Materials Research and Education: Future Trends and Opportunities.” This was the first meeting of its kind to be held in Qatar, and the trip was sponsored by the US National Science Foundation (NSF). We met for three days with local and regional scientists to discuss and explore materials science education and research in that part of the world. The meeting took place in Education City, located on the outskirts of Doha. Although there were a few buildings then, there was much construction underway in the surrounding areas, signaling the initiation of a massive project. I learned later that this project was part of a master plan to transform Education City into an international education and research center.

Education City is now the home for branch campuses for renowned universities in the US, Canada, and France. Each one of these branch campuses offers programs that complement the programs offered at the other campuses. For example, the Texas A&M University branch offers degrees in chemical, electrical, mechanical, and petroleum engineering, while the Carnegie Mellon University branch offers degrees in computer science, information systems, and biological sciences. However, Qatar University, the main public university in Qatar, offers programs in all disciplines of arts and science, engineering, law, medicine, education and humanities; the physics program is offered within the department of Mathematics, Statistics and Physics.

Education City and Doha’s fast growth is driven by the “Qatar National Vision 2030” report, which outlines ambitious goals and strategies aiming at establishing “Qatar as a knowledge-based economy.” This is a document I enjoyed reading: It presents a coherent path to the future to transform Qatar into an advanced country by 2030. One of the four pillars discussed in this document is focused on human resources and education, and the document outlines a set of objectives, some of which are specific to the development of scientific research and higher education. It is refreshing to see that in the midst of chaos and continuous wars in that part of the world, Qatar opted to invest heavily in human development, education and science. Most intriguing is Qatar Foundation’s commitment to funding basic scientific research by establishing Qatar National Research Fund (QNRF).

In 2009, Eyad Masad, of Texas A&M University at Qatar, introduced me to his colleague Ghassan Kridli in the mechanical engineering department to explore the possibility of submitting a collaborative research proposal to QNRF. At first I must admit that I was reluctant and wanted to learn more about QNRF before committing myself to such an effort. After all, support for science and basic scientific research in that part of the world, despite its tremendous resources and wealth, has been lacking for years. It is no secret that the scientific productivity from countries in that region has accounted for a very small fraction of global output — it is even among the smallest compared to other developing countries. However, as I learned about QNRF, I thought that there is something positive about to happen that may turn things around.

QNRF, much like NSF in the US, fosters original and competitively selected research in engineering and basic sciences. The impact of QNRF is already being felt in the international scientific communities. I now see many scientists at international conferences presenting the results of research supported by QNRF. Scientists from various institutions in Qatar and in collaboration with scientists from across the globe, now compete for research funding from QNRF. In its recent Annual Forum, QNRF announced that it had received 798 proposals and awarded grants for 162 proposals across 22 institutions. This is indeed an impressive accomplishment in a very short period of time.

Besides QNRF, Qatar Foundation is also establishing a number of national organizations. During my most recent visit to Doha in the fall of 2013, my long-time friend and colleague, Mohammad Khaleel, invited me to visit the offices of the newly established Qatar Energy and Environment Research Institute (QEERI). This is one of four research institutions being built by Qatar Foundation to fulfill the goals of Vision 2030. Although these institutions are still in their nascent stage, they are already attracting the best scientists from across the world. Khaleel, a leader from one of the US national laboratories, opted to relocate to Doha to lead QEERI. Under his leadership, QEERI is now attracting top-notch scientists and is building state-of-the art research facilities in computing, materials science and environmental research.

This is only a glimpse of what is emerging in Doha in terms of scientific developments. It seems that the Qatar Foundation is putting together all the pieces of the puzzle for a potentially successful, sustainable, and world-class scientific network. This is rather inspirational in a region with huge wealth and natural resources, yet with tremendous untapped human potential, especially its younger generation. I have enjoyed visiting Doha and observing its transformation into a modern city. Perhaps on my next visit, I will see yet again new and fascinating developments taking place in that part of the world.

Hussein M. Zbib is Professor of Mechanical and Materials Engineering at Washington State University, and a member of the APS Committee on International Scientific Affairs.