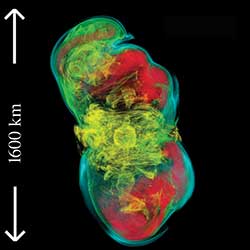 Simulation of a rapidly rotating and highly magnetized supernova.

At the 2014 APS April Meeting in Savannah, Caltech theoretical astrophysicist Christian Ott presented the first 3D computer simulation of a rapidly rotating, highly magnetized core-collapse supernova. The new work reveals a much more asymmetric picture of these monsters than previous 2D models, and may also provide insight into how the collapsing matter becomes a black hole.

The simulations by Ott and colleagues look specifically at a so-called “engine driven” core-collapse supernova, which is characterized as hyperenergetic, even by supernova standards. These supernovae eject material into space at nearly the speed of light and produce gamma ray bursts in the process.

“Our simulation…looks fundamentally different,” said Ott at a press conference in Savannah. The new model shows a notably asymmetric explosion: The plasma appears to emerge along the axis once again, but rather than forming jets, it spreads out into two lumpy, asymmetric lobes.

The asymmetry appears to arise from a “kink instability” which develops in the 3D model, and cannot emerge in models with only two dimensions. This type of instability is also seen in tokamak reactors, which use magnetic fields to confine plasma and control its shape.

“So this is physics we’re familiar with,” he said. “It’s just the first time that we actually see that in a supernova.”

Running on the Blue Waters supercomputer at the University of Illinois at Urbana-Champaign, the simulation requires 6 terabytes of memory to run, with a total simulation output of 500 terabytes of data.

The model also differs from previous 2D models by showing that as the explosion takes place, matter may still accrete onto the central neutron star that forms when the star initially collapses. This addition of matter means the highly dense body could gain enough matter to form a black hole.

“There is presently a lot of discussion in the astrophysics community if such supernovae/gamma-ray bursts harbor (and are driven by) a neutron star or a black hole,” said Ott in an email. “Our model suggests that a black hole may form and could be at the center of the supernova/gamma-ray burst.”

It may, in fact, be the accretion onto the newly formed, rapidly spinning black hole that drives the subsequent explosion. This, says Ott, “…would be consistent with observations of the galactic core-collapse supernova remnant W49B, which exhibits signatures of a very aspherical explosion, but shows no signs of the presence of a neutron star.”

The work is detailed in the April 20 issue of The Astrophysical Journal.