In Command, on the Front Lines of Radiation Research 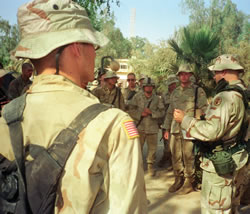 Colonel Mark Melanson briefs soldiers at the Tuwaitha Nuclear Research Center in Iraq in 2003 about the radiation risks that they face.

If you are traveling through the airport and happen to be standing next to Colonel Mark Melanson while he is in uniform, you will know right away that he is in the Army; however, that would hardly begin to tell the whole story. Colonel Melanson is also a physicist, world renowned expert in the medical effects of radiation, and the senior health physicist in the United States Army (Health physicists are experts in radiation safety.). As the 16th Director of the Armed Forces Radiobiology Research Institute (AFRRI), Melanson leads a team of 200 personnel, including medical officers and civilian research scientists, to ensure the safety of US soldiers and those they protect from the harmful effects of radiation exposure. He is only the fourth physicist to hold the top position at AFRRI, considered “one of the premier radiation effects research laboratories in the world,” he says.

The Institute, celebrating its golden jubilee this year, is charged with studying the biological effects of ionizing radiation and developing medical countermeasures to protect against its lethality. In addition, it provides medical training and emergency response teams to manage incidents related to radiation exposure, according to its website.

The Colonel received his bachelor’s degree in physics from Dickinson College in Carlisle, Pennsylvania, where he was an Army ROTC scholarship recipient. When he graduated in 1983, he was commissioned as a second lieutenant, nuclear medical science officer. He later acquired his master’s and PhD in radiation health sciences from The Johns Hopkins University. During his more than 27-year career, he has held a variety of positions in health physics in the military, including his previous assignment as chief of Health Physics at Walter Reed Army Medical Center and leader of the elite US Army Radiological Advisory Medical Team.

“I have experienced the whole spectrum of the health physics profession,” Melanson says, “medical, environmental cleanup. I’ve done everything in the field of health physics. My career has served me well.”

He has also experienced war firsthand. In 2003, he was deployed to Iraq to assess the safety of soldiers at the 23,000-acre Tuwaitha Nuclear Research Center, “the crown jewel of Saddam Hussein’s nuclear weapons research program,” as Melanson wrote in an article for the Army Medical Department Journal (Melanson).

He recounts how “I got called down to the Old Executive Office Building [now renamed the Eisenhower Executive Office Building] in Washington, D.C., in the early phases of Operation Iraqi Freedom, because the White House was concerned about the safety of US troops.” When asked about the safety of American men and women guarding the bombed, looted, and burned nuclear complex, he replied, “I can’t answer that without my boots on the ground and [the ability to] take radiation measurements and collect environmental samples.” Before he knew it, Melanson was deployed into the middle of the war zone.

He and his team delicately maneuvered around gunfire to get to the large nuclear complex where they took air and soil samples and used radiation detection instruments to assess any exposure risk for the approximately 4000 American soldiers and marines operating at or near the complex, which was located 20 kilometers south of Baghdad.

“It’s very sobering” being in war, he notes. Extreme danger was omnipresent. “You always had that in the back of your mind. The threat of getting wounded or killed was always there. While you’re trying to get your job done, you always know you are in a war zone.” He was in Iraq for nearly two weeks and collected thousands of radiation measurements and hundreds of environmental samples. While Melanson’s team ultimately determined that the site had minor radiological contamination, the levels were deemed to be safe. “I am most proud of this mission to Iraq,” he says. “Potentially there were lots of soldiers in harm’s way and I was the only one who could say if they were safe or not.”

Throughout his career, the Colonel has successfully balanced the demands of being both an officer and a scientist. “On the officer side,” explains Melanson, “you are expected to be a leader and have an understanding of how the Army works.” As a military health physicist, you must know how to support operational missions and ensure protection against radiation’s harmful effects. The Army’s Nuclear Medical Science Officer career field, which Melanson leads as a consultant and career field manager, traces its proud heritage directly back to the Manhattan Project, he explains. Of course, maintaining superior levels of skill in physical fitness, military strategy, and weapon qualification are a given.

In addition to leading AFRRI and the Nuclear Medical Science Officer career field, Melanson publishes papers, speaks at scientific meetings, and serves as an assistant professor in the Department of Preventive Medicine and Biometrics at the Uniformed Services University of the Health Sciences, located in Bethesda, Maryland, where he teaches health physics, health risk communication and radiobiology.

“First and foremost, I am an Army officer,” he says, “although the Army and science are equally important in my mind; I never felt I had to trade off one for the other.” To be sure, Melanson does not believe that Army and health physics professionalism are in conflict. “On the contrary, they are complementary,” he argues. “As a [health physicist], your duty is to protect people from radiation; [and] as an Army officer, I do that for our troops.”

In fact, “as the Army’s expert in radiation, the senior leadership in the Army turns to me to provide my unique expertise on how to reduce radiological exposure and risks,” he continues. “They ask for my professional judgment based on the science. I’m not pressured to say anything other than the scientific truth.”

One of the truths that Melanson strives to impart to the public is that AFRRI’s investigations are nonoffensive. “First and foremost, we’re focused on protecting people from radiation effects. We’re not developing better ways to kill people with radiation,” he passionately declares. This research has useful applications beyond the borders of the military, he says, such as in medicine, and is often integrated with scientific research conducted by other countries.

Still in his first year at the helm of AFRRI, Melanson is focused on a number of what he calls “grand challenges.” He wants to orchestrate better, more prepared medical response  teams in the event of a dirty bomb or nuclear detonation on American soil. His Institute is researching more sensitive methods of biodosimetry, laboratory results or clinical observations that determine a person’s radiation dose. His team is pursuing faster, more sensitive, longer-lasting biodosimetry tools that could be used “before or after [a] nuclear detonation to reduce mortality and sickness,” he describes. Furthermore, AFRRI scientists are examining avenues to “administer countermeasures to reduce the lethal effects of radiation.”

The Colonel trumpets the multitude and diversity of health physics careers in the Army; Melanson’s path has been a “rewarding” one, he acknowledges.

“My primary interest in getting involved with APS [the American Physical Society] to do this interview was not to satisfy my own ego of being in print, although my mom will like to read the article, I won’t deny this,” he says.  “It was to show physicists and graduating physics majors that there are exciting and rewarding opportunities for health physicists while serving in the Army.”

There are approximately 60 uniformed health physicists in the Army serving around the globe. Each year the Army is looking for several new recruits to join the career field. Physicists with bachelors, masters, or doctoral degrees are all qualified to enter the Army as nuclear medical science officers. Their pay is dependent upon their degree and any experience they may have in radiation safety. Once on active duty, these officers receive military and health physics training, and practice the craft of health physics, and are eligible to compete for graduate school fellowships where they can shed their uniforms and go to grad school for free while earning their full pay and allowances.

After 20 years, nuclear medical science officers can retire and receive half of their pay, adjusted for inflation, for the rest of their lives. Many of these retiring officers go on to start second careers in radiation safety while others completely retire and enjoy their hobbies full time. Physicists or graduating physics majors interested in finding out more information are encouraged to contact Colonel Melanson at (301) 295-1210 or via email, Mark Melanson.