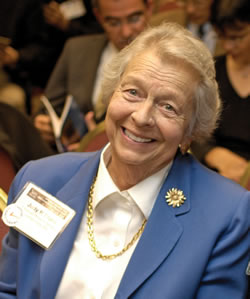 The US spends close to a trillion dollars annually on education, of which 90% comes from state and local sources. This means that there are extraordinarily many points of power and decision making, so change at the national level is very difficult. Nevertheless, there are exciting initiatives underway across the country, and I am hopeful that there will be some major improvements.

Three main reasons are usually given for the necessity of improving K-12 science education. The first is workforce and economic development. President Obama has made the strong statement that “If we as a nation do not prepare one of the world’s most educated and scientifically and mathematically literate workforces, then we have no chance of continuing to be one of the world’s most secure and competitive economies.” It’s becoming widely accepted that the international economy we live in is changing the nature of work and the kinds of jobs young people will enter. Jobs that once required a high school degree and paid a decent wage are disappearing.

The second reason, the need for improving science literacy, is becoming more evident. The public is called upon to worry about such things as whether the LHC is causing black holes that will destroy the world or whether climate change is real, but most people have no idea how to think about such things themselves or even how scientists approach such issues.

The third reason is the production of the next generation of scientists and engineers. Within the physics community, we can argue about whether the country needs to increase the number of PhDs in physics, but we would all agree that we want the brightest students to consider physics as a career. And there is very little argument about the value of increasing the number of undergraduate majors in physics. The rigorous training in conceptual and analytical thinking makes physics a wonderful background for a wide range of careers. Most students decide to study physics and math while in high school or before, so providing strong science education along the way is critical.

There is general agreement that what is needed most to improve science education is more and better K-12 science teachers. Research has shown that there is no school factor more important to learning than the quality of teachers. For years, national education reports emphasized the need for better science teachers, but it was the 2007 report Rising above the Gathering Storm that caught the attention of a wider audience. It was a report not on education but on national competiveness and innovation, yet its first two recommendations were to recruit 10,000 new science and mathematics teachers annually and to strengthen the skills of the 250,000 existing teachers.

Why don’t we have sufficient excellent physics teachers?  Here’s my list:


This is a rather disheartening list, but I will attempt to show you that many of these issues are being attacked.

There are more than 20,000 physics teachers, but only a third have a degree in either physics or physics education, and most of the rest have had AT MOST a set of introductory courses. Many are teaching without proper certification.

More than a decade ago, physicist staff members at APS, the American Association of Physics Teachers (AAPT) and the American Institute of Physics (AIP) started discussions to determine how we could work together more effectively to improve physics education. The key problem that was not being tackled, we all agreed, was the production of more, well-educated, new teachers.

We found a small group of universities that would work closely with us to develop model programs of teacher education that might be emulated by others. We applied for and received a 5-year grant of about $6M from NSF. The program is called PhysTEC for Physics Teacher Education Coalition. Initially, there were five key elements that each university had to provide:


As the program has developed and models have been tested, each of these elements has remained extremely important, and two others have been added–active recruitment of students, and early teaching experiences, often as undergraduate TAs in introductory courses.

I am very proud of this program and pleased that I could play a role in it from its inception. PhysTEC recently received a second NSF grant for $6.5 M and is now cited as a model program by NSF and others. Participating universities have greatly increased their production of new physics teachers; we think they are better educated as well.

There is a tremendous amount of evidence that students learn best when they are actively involved in the learning process, but physicists tend to suffer from the misconception that if they understand something very well and can explain it very clearly, then this understanding will be transferred from their brains to those of the students. If prospective teachers aren’t taught with inquiry methods, not only will they learn less, but they will be much less likely to use inquiry methods in their own teaching.

The second item on my list is low salaries and no merit pay. Teachers’ pay usually depends only on their education and years of service. Teachers as a whole earn about 90% of the salary of others with comparable education. AIP surveys have shown that physics teachers’ salaries are quite low compared to what physics majors can earn in other jobs. Teachers’ unions fight merit pay vigorously, so that great teachers usually receive no special financial rewards.

In President Obama’s new Race-to-the-Top initiative,  states compete for very large federal grants but have to show that they are taking major steps to improve education. These steps include reworking teacher evaluation systems so that they are based, in part, on student achievement.

The third item on my list, lack of mentoring and professional development, results in a high turnover rate. New physics teachers typically get very little on the job mentoring, and many get discouraged and leave. One of the jobs of the Teachers-in-Residence in the PhysTEC program is to stay in touch with the new teachers and help them through initial trouble spots. Teachers also need continuing professional development opportunities, but physics teachers rarely get this.

The fourth item, erratic funding, makes it difficult to sustain good programs. Some years Congress is keen to support education, but then other priorities arise. NSF can only fund excellent programs for a limited period of time since its mandate is to support educational research and innovation and not ongoing programs. The Gathering Storm report noted that US education infrastructure suffers from a “recurring pattern of abundant short-term thinking and insufficient long-term investment.”

The fifth item, poor school management, is a complicated set of issues, involving difficult decisions on such things as charter schools and teacher reward systems, but particular to science is the need to allow students to do hands-on experiments. School principals need to provide adequate space, equipment and scheduling flexibility. In surveys, teachers most often cite “job dissatisfaction” as their main reason for leaving their jobs. When probed about what this means, it is not salary but the obstacles that prevent them from doing their jobs well that they cite.

Finally, the sixth item is the lack of standards and assessment. The program, “No Child Left Behind,” started by President Bush, is up for reauthorization. As is, schools are required to test all children on math and reading competencies, and a school’s progress in these areas affects its funding. The result has been more emphasis on math and English which means less on everything else, including science. The science community has lobbied to have science become part of the core competencies, but this is not in the blueprint that was released recently by the Department of Education.

One big problem is that the assessment is supposed to be based on standards, but there are no widely-adopted science standards. The US education system is tremendously decentralized, but there are now forces working toward coordinated efforts among states. How has this come about?

There is a bipartisan, non-profit education organization, called Achieve,which has been working with states to raise academic standards and graduation requirements, improve assessments, and strengthen accountability. Based on some of this work, 48 states (all but Texas and Alaska) have formulated a set of “Common Core State Standards,” for what children should learn in math and English. These were released for comment a few months ago. Reviews have been very good. Now we need to do this for science.

Why is it is so difficult to define standards? There currently exist two sets of science standards that were developed back in the ‘90s; one by AAAS and the other by the National Academy. Each is several hundred pages long and has been criticized as being a mile wide and an inch deep. Of course it was we scientists that wrote and approved those standards, and they are so diffuse because each of us truly believes that if students don’t learn about our part of science, they will be damaged for life. But common national standards would allow teacher education to focus on deep understanding of ideas that every student ought to know and would allow textbooks to be reduced to a manageable size.

Can the science community work together to develop standards that are “few, clearer, and higher,” as we have been asked to do? My understanding is that the mathematicians had many battles as they developed their standards, but they at least were all mathematicians, while we physicists will have to contend with chemists, biologists, geologists, and all other branches of science. It will be a tough job, but it is extremely important, and there is a committee within the National Academy that is beginning the process. Once standards are in place, teachers can be evaluated on their ability to help students meet the standards, and teachers’ professional development can concentrate on these core topics. Good standards are necessary if we are to have good assessment tools, and this is critical to giving science a larger role in the overall school curriculum.

In conclusion, we know quite a bit about what is needed to get and keep more excellent teachers in the classroom. Physics departments have to work harder to convince good physics students to consider teaching as a career, and then these students have to get an excellent education, not just in physics itself, but also in how students learn physics.

We need to make sure when we send teachers out into the schools that they are supported and mentored, particularly through the first few years that can be very tough. We should work to retain good teachers, whether it is through merit pay or better school management. We should work to help develop national standards that will become good assessment tools. And we should press federal agencies to include stable funding for teacher professional development and for science education research so we continue to explore how students learn and how to make good teaching even more effective.