March Meeting to Convene in Oregon 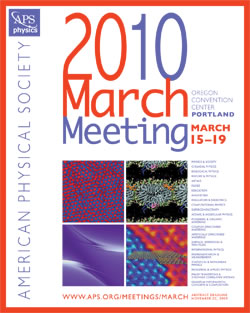 The 2010 APS March meeting will take place from March 15th to the 19th at the Oregon Convention Center in Portland, Oregon. The yearly meeting is the largest annual conference of professional physicists in the United States, and will feature 100 invited sessions and 550 contributed sessions totaling over 7,000 presented papers. The meeting will include the latest research from the APS divisions of Atomic, Molecular and Optical Physics; Biological Physics; Chemical Physics; Computational Physics; Condensed Matter Physics; Fluid Dynamics; Laser Science; Materials Physics; Physics of Beams; and Polymer Physics.

In addition to the scientific sessions the meeting will include a number of fun, exciting and fascinating events. Tuesday night’s Nobel Prize session will feature 2009 laureate George E. Smith describing the invention and early history of charge-coupled devices. The Committee on the Status of Women in Physics will be having a joint breakfast reception with the Forum on Industrial and Applied Physics on Tuesday morning. The APS Washington office will be operating its “Contact Congress” computer bank so APS members can voice their concerns over issues of science to their senator or member of congress. To help everyone relax after days of intense presentations, the ever-popular physics sing-along will be returning as well.

The division of polymer physics will be organizing a series of pre-meeting courses, on the 13th and 14th, about the uses of polymers for energy generation and storage, ranging from basic battery operation and electrical transport to polymer electrodes and electrolytes.

Other workshops include the Professional Skills Development Workshop for women post-docs and junior tenure-track women physicists held on the 14th. Also on the 14th, there will be an Energy Research Opportunities Workshop for graduates and post-docs interested in pursuing clean energy research, as well as the APS Forum on Education for anyone interested in teaching physics courses. Eight other stand-alone tutorials will also be held on the 14th on topics from graphene and spintronics to careers in industry and government.

Childcare grants up to $400 are available to meeting attendees with young children. Grant applications need to be completed by January 15th. Quiet rooms will be available at the meeting.