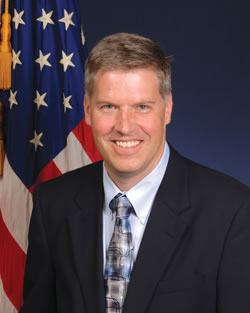 Patrick Gallagher
Patrick Gallagher was confirmed as the 14th Director of the National Institute of Standards and Technology by the U.S. Senate on November 5th. Gallagher will oversee all operations at both the Gaithersburg, Maryland and the Boulder, Colorado facilities. He had already assumed most of the administrative responsibilities when named its Deputy Director in September 2008. Gallagher said that he was “humbled and honored” to be named Director of the Institute.

“NIST is at an important juncture in its history,” Gallagher said, “We have a world-class workforce, state-of-the-art research facilities, and the opportunity to make a real difference helping find practical, innovative solutions to some of the nation’s toughest technical challenges.”

With a budget of $1.6 billion and 2,900 employees, NIST’s mission is to help strengthen the U.S. economy by advancing science and technology. With a PhD in physics from the University of Pittsburgh, Gallagher first came to NIST’s Center for Neutron Research in 1993 to further develop neutron and X-ray instrumentation as well as to study the properties of soft condensed matter in polymers, liquids and gels. In 2000 he became the agency’s representative at the National Science and Technology Council, and later was named chair of the Interagency Working Group on neutron and light source facilities under the President’s Office of Science and Technology Policy.