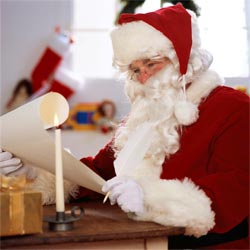 You better be good!  The physicist is making a list and he's checking it twice.

Santa Claus is a Physicist


Santa is at least several hundred years old, and you've got to assume that somewhere along the line, he spent some time in academia and probably got a degree or two. Assuming he is a man of science, what kind of scientist might he be?

Now, you might think that there are lots of ways to go with this. You could note the flying reindeer, and say that they’re clearly the product of either genetic engineering or at the very least a sophisticated understanding of evolutionary biology. You could take the fact that he manages to deliver toys all over the world as clear evidence that he has found the solution to the Traveling Salesman Problem, and thus is either a mathematician or a computer scientist. But really, all the evidence points to Santa being a physicist.

I mean, it's the only explanation that covers everything. Flying  reindeer? Obviously, the product of sophisticated anti‑gravity technology. Planning the route? Done with a quantum computer. Likewise, sorting the naughty from the nice, which is clearly some sort of Grover's algorithm issue.

And anybody who can deliver that many toys to that many places in that little time obviously has a deep understanding of relativity  and is using a system of wormholes to travel back and forth in time, spreading the toy‑delivering out over an entire year of his own subjective time, while the rest of us only see one night.

That’s a much more reasonable explanation than elves making toys in a secret factory at the North Pole and towing them around with reindeer. After all, the supply chain issues alone would be a nightmare, and the speed and weight issues are well known. Spread that load out over an entire year, though, and it becomes much more reasonable, particularly if the wormholes can be targeted to individual houses.

This also explains the chimney thing–he doesn’t actually enter via  the chimney, itself (which would be impractical for a fat man with a bag of gifts), but rather through a wormhole whose mouth is located in the vicinity of the fireplace, which is obviously one of the safer places in the average house to do that sort of thing, as you can be sure that there won’t be anybody standing there when the wormhole opens.

So, clearly, Santa Claus is a physicist. It’s the only explanation  that makes sense.

Chad Orzel is a physics professor at Union College, and also blogs at  Uncertain Principles.