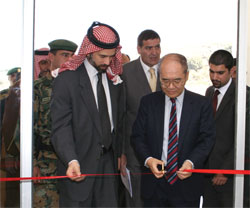 Jordanian Prince Ghazi ben Mohammed (left) watches as Koichiro Matsura (right), Director-General of UNESCO, cuts the ribbon signifying the launch of the SESAME facility. Standing between them is the Director of SESAME, Khaled Toukan

SESAME, a synchrotron radiation laboratory in the Middle East, opened with an inauguration ceremony November 3, attended by Prince Ghazi ben Mohammad of Jordan and Director-General of UNESCO Koichiro Matsura.

SESAME (Synchrotron-light for Experimental Science and Applications in the Middle East) is a UNESCO-sponsored project that aims to promote scientific development as well as understanding and cooperation among scientists from different countries in the Middle East.

The facility is located in Allaan, Jordan, about 20 miles from Amman. The November ceremony marked the completion of the main building for SESAME. Scientific operations are expected to begin in 2011.

The SESAME project will offer facilities for interdisciplinary scientific collaboration and promote basic and applied research in the Middle East.

“One of the challenges for the success of SESAME is building a user community by enabling Middle Eastern scientists to avail themselves of training opportunities,” said APS Director of International Affairs Amy Flatten, who attended the November inauguration ceremony. “While many can find local support at host training institutions, or food and lodging for the “SESAME Users Meetings,” they oftentimes cannot find funds to cover the travel/airfare.”

Consequently, the American Physical Society, the European Physical Society (EPS), and the U.K. Institute of Physics (IoP) have agreed to establish a joint SESAME Travel Award Program. EPS, IoP and APS will each provide $5K each annually ($15K jointly) for the next 3 years, for “travel awards” that would enable Middle East scientists to attend SESAME “Users Meetings” or other training opportunities. Flatten is approaching other physical societies to contribute as well.

Mr. Salameh Al-Hyari, Mayor of As-Salt City, Jordan, and Herman Winick. As-Salt is the largest city near the SESAME site. Al-Hyari and Winick are standing by the synchrotron which arrived in parts from Germany and is being assembled in the new SESAME facility.


Herman Winick, a long-time APS member who currently serves on the APS Committee on International Scientific Affairs (CISA), was one of those who originally proposed SESAME and has been instrumental in promoting it.

SESAME will be a powerful synchrotron radiation source producing light from infrared to x-rays. The synchrotron is built from components of the retired BESSY I accelerator, donated by Germany. SESAME users will conduct research in a variety of areas of research, including physics, materials science, molecular biology, nanotechnology, archaeology, environmental studies, and medical research.

The international physics community has shown its support for SESAME through a resolution recently passed by IUPAP, the International Union for Pure and Applied Physics.
In November, Herwig Schopper ended his term as SESAME council president and Chris Llewellyn-Smith took over the position.