Science builds on all the knowledge that came before, and the story of Cherenkov radiation is no exception. In this case, it arguably begins with Oliver Heaviside, an English electrical engineer, mathematician, and physicist, even though the phenomenon is named after the Soviet physicist Pavel Cherenkov.

A product of the London slums that also produced Charles Dickens, the red-haired, diminutive Heaviside fell ill with scarlet fever as a child, which left him partially deaf. He was socially awkward and didn’t get along with the other children at school in Camden Town, although he was a top student in every subject save geometry. Heaviside dropped out at 16 to continue his schooling at home. His uncle was Sir Charles Wheatstone, who co-invented the telegraph in the 1830s and was a recognized expert in the new field of electromagnetism.

Within two years, young Oliver found himself working as a telegraph operator, quickly advancing to chief operator. Heaviside discovered John Clerk Maxwell’s seminal treatise in 1873 and was so enthralled by the work that he quit his job the following year to study it full-time, moving back into his parents’ home in London. Once he’d grasped the essential points, “I set Maxwell aside and followed my own course,” Heaviside later recalled. In the end, he reduced Maxwell’s equations from 20 down to four vector equations and built upon that work to develop vector calculus.

In 1888, Heaviside published a paper in The Electrician, in which he explored the electromagnetic effects of a charge moving through a dielectric. “If the speed of the motion exceeds that of light, the disturbances are wholly left behind the charge, and are confined within a cone,” he wrote. Unfortunately, nobody paid much attention to Heaviside’s work in this area—he was an eccentric recluse later in life. His contribution wasn’t uncovered until 1974, revealed in a one-page letter to Nature by physicist Tom Kaiser.

A 1904 paper by Arnold Sommerfeld theoretically predicting Cherenkov radiation also failed to gain traction within the scientific community. And in 1910, Marie Curie notably referenced an observation of a strange blue light during her research into a highly concentrated radium solution. “Nor was this the end of the wonders of radium,” she wrote. “It also gave phosphorescence to a large number of bodies incapable of emitting light by their own means.” Neither Marie nor her husband Pierre followed up on the observation, but their French colleague, Leon Mallett, began studying the phenomenon in earnest in 1922.

Enter Cherenkov. Born in July 1904 in a small village called Novaya Chigla, he graduated from Voronezh State University in 1928 and became a senior research in the Lebedev Physical Institute. In 1934, Cherenkov began conducting his own experiments on this strange form of radiation, working with his institute colleague Sergei Vavilov. (In fact, it was termed “Vavilov-Cherenkov radiation” in the Soviet Union.) He noted that same emission of blue light when bombarding a bottle of water with radiation. 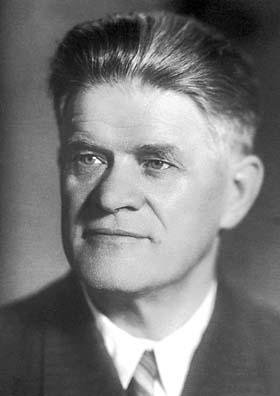 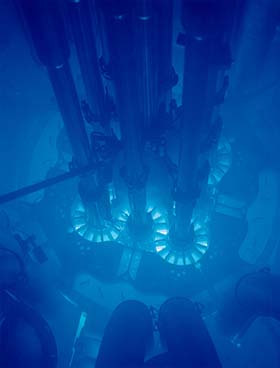 Radiation from a nuclear reactor submerged in water causes the blue glow of Cherenkov radiation.

Today, Cherenkov radiation is a critical element in numerous applications. The Cherenkov detector is now standard in particle research and one was even installed on Sputnik III. Astrophysicists rely on the effect to monitor cosmic rays hitting Earth’s atmosphere and to detect neutrinos in such facilities as the Sudbury Neutrino Observatory, Super-Kamiokande, and IceCube.

As for more practical applications, the glow from Cherenkov radiation is a good way to monitor nuclear reactors. It continues even after the chain reaction stops, dimming gradually as the more short-lived products of fission decay. It can also be an indication of how much spent nuclear fuel is still present fuel pools. In medicine and biology, Cherenkov radiation is used to detect biomolecules doped with radioactive atoms like phosphorous-32 to characterize their interactions. In the medical realm, Cherenkov light can be used to detect radiation in the body. And external beam radiotherapy produces Cherenkov light in treated tissue, which can be detected at the entry and exit points.

As for Cherenkov, after being promoted to section leader, he was awarded a doctorate in 1940. By 1953 he was a professor of experimental physics, taking over the institute’s photo-meso processes laboratory in 1959. He shared the 1958 Nobel Prize in Physics with Ilya Frank and Igor Tamm, who together developed the theory behind the phenomenon Cherenkov reported. Cherenkov went on to help develop and build electron accelerators, among other notable accomplishments.

Cherenkov died in Moscow on January 6, 1990. Among his other claims to fame, the character of Pavel Chekov on Star Trek is named in Cherenkov’s honor, and the spaceships in the 1997 science fiction film Starship Troopers use a “Cherenkov drive” to travel faster than the speed of light.

Heaviside, Oliver. (1888/1889) “Electromagnetic waves, the propagation of potential, and the electromagneteic effects of a moving charge,” The Electrician.