Millions flock to movie theaters every weekend to view the latest Hollywood blockbusters, and the multimillion-dollar film industry dominates popular culture. Among the early pioneers who made this revolution possible were two French brothers: Auguste and Louis Lumière.

Auguste was the elder, born in 1862, while Louis was born two years later. Their father, Antoine, started out as a portrait painter before switching to photography, setting up his own small business making photographic plates in Lyons. Both sons completed technical school, with a solid grasp of organic chemistry, although Louis preferred physics and Auguste gravitated towards biochemistry and medicine. They went to work for their father. After experimenting with his father’s equipment, Louis in particular became fascinated with the underlying science. At just 17, he invented a new "dry plate" process for developing film.

At the time, photographic plates used wet emulsions that required a darkroom during preparation and immediately after exposure of the plate. A dry plate process existed, but the Lumières’ "blue plate" improved on that significantly, reducing the need for a darkroom. Under the two brothers, business boomed, and the family company became the biggest manufacturer of photographic plates in Europe by the 1890s, producing around 15 million plates per year. That wealth freed up the brothers to experiment with other forms of photography.

Photography was still in its infancy, but some investigators were already experimenting with making the images move, including famed photographer Eadweard Muybridge, who pioneered a process in which a series of pictures would be taken of a subject in motion and then shown in rapid sequence. His Zoopraxiscope (inspired by a children’s toy known as a zoetrope) projected images from painted rotating glass disks, and was arguably the first film projector. 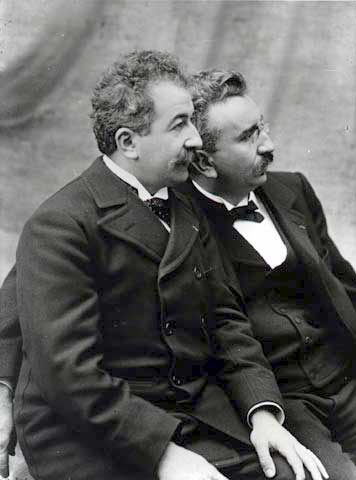 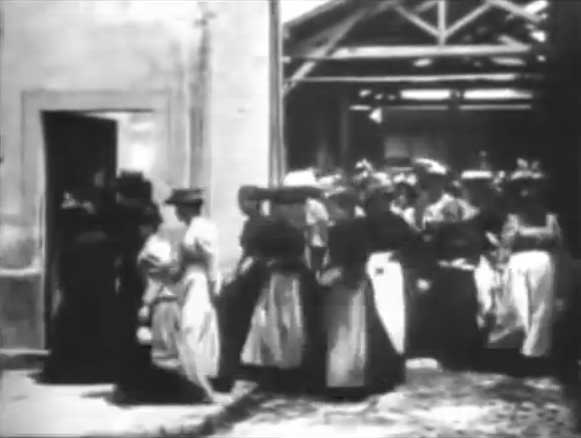 In the winter of 1894 Antoine, then in Paris, witnessed an exhibition of Thomas Edison’s kinetoscope, which showed short moving films produced by a companion invention, the kinetograph. Antoine snagged a sample of film from one of the exhibitors there to show his sons. He thought they could develop a better, cheaper alternative to the kinetoscope and kinetograph, combining the viewing, developing, and recording functions into one device. Instead of the single-viewer kinetoscope, he envisioned projecting films onto a large screen so that many people could watch all at once.

The brothers began experimenting at once, and by the following year they invented the Cinematographe, which weighed just 11 pounds and could be operated with a simple hand crank rather than relying on electrical power. Louis drew inspiration one sleepless night from how a sewing machine operates, and invented a claw mechanism to pull the film through the camera. In contrast to the sprocket system used by Edison, the Lumières’ device formed the basis of subsequent early cinema cameras. However, it recorded and projected at much slower speeds than Edison’s Kinetoscope (16 frames per second compared to 48 frames per second).

The brothers used their invention to shoot footage of workers leaving their factory at the end of the day, and presented the short film in Paris on March 22, 1895. Over the next several months, they shot several more one-minute films and gave a second demonstration of the Cinématographe to the French Photographic Congress in Lyon that June. Their father Antoine organized a public screening several months later at the Grand Café on the Boulevard des Capucines. Among those in the audience: illusionist and future pioneering director Georges Méliès, who made one of the first science-fiction films (1902’s A Trip to the Moon). While the brothers were initially reluctant to hold a public screening, feeling it was premature, Louis later observed that on that day "was really born the expression, ‘I have been to a movie.’"

This wasn’t necessarily the first public screening, since another pair of brothers in New York, Grey and Otway Latham, showed films of boxing matches for paying audiences beginning in May of 1895. (Their father, Woodville, co-invented the Latham loop, which enabled continuous shooting and projecting of much longer films.) The following year, Louis and Auguste opened several Cinematographe theaters in London, Brussels, Belgium, and New York, where they screened more than 40 short films they produced that year, mostly scenes from French daily life. The most famous featured a train rushing towards the audience, sometimes causing panic and the occasional fainting spell.

At first the public didn’t have much interest in these shows, which offered 10 short films in 15 minutes for one franc (in Paris). But word quickly spread, and soon people were lining up to marvel at the moving pictures. Cinema would go on to transform popular entertainment, but the Lumière brothers—having helped spark the revolution—soon lost interest in making moving films. A failed attempt to sell equipment and film in New York may have contributed to this, as Edison’s format soon dominated the fledgling industry over their own. By 1896, the original Cinematographe had been supplanted by the Lumière’s Model B, which projected films only in the Edison format.

In 1905, the brothers decided to focus instead on developing a practical process for color photography: the Lumière Autochrome, introduced in 1907. James Clerk Maxwell used various colored filters to project color images of his subjects, but printed images (photographs) were not possible until Louis Ducos du Hauron figured out how to superimpose positive and negative images shot through colored filters. But it was a complicated and time-consuming process. The Autochrome improved on that early dry plate process, and became the preferred method for color photography for the next 30 years.

Louis went on to direct thousands of reels of film for the Cinetomatographe and a technique for stereoscopic photography in 1935 capable of creating hologram-like images. Auguste focused on his interest in biochemistry and medicine, researching cancer and tuberculosis, among other diseases, and publishing a book, Life, Illness, and Death: Colloidal Phenomena, in 1928. He died in 1954 at home in Lyons, at the age of 91—six years after the passing of his younger brother Louis.

Macgowan K. 1965. Behind the Screen: The History and Techniques of the Motion Picture. Delacorte Press.