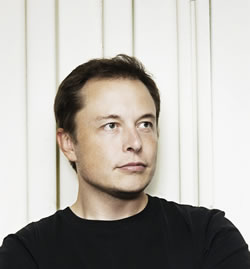 Elon Musk, the founder of companies such as PayPal, Space X and Tesla Motors, studied physics and economics at the University of Pennsylvania. Part 1 of Alaina G. Levine's exclusive interview with Musk appeared in the October APS News. Below is part 2, in which he cautions that MBAs are a mistake, hints when we can expect to travel to Mars and explains why his Tesla Model S is making history.

M: It's helpful to study physics, because the math that's in the business stuff is so easy compared to physics. I remember I was in an advanced securities analysis class and they were teaching people what matrix math is. I was like wow, ok. If you can do physics math then business math is super easy. Probably a lot of people in the sciences sell themselves short on this front. Because they're actually way better than they think they are at this stuff. Just generally taking a physics framework to think about any problem–it's a generalized problem-solving method that can be applied to the economic world as well as the physical world.

L: Having studied math and physics myself, I always found that I would look at a business problem like a bifurcation tree and think about things 4 or 5 or 6 moves ahead. Do you have this as well, and if so, do you think you got this from studying physics?

M: Yeah, in general you always want to try to think about the future, try to predict the future. You're going to generate some error between the series of steps you think will occur versus what actually does occur and you want to try to minimize the error. That's a way that I think about it. And I also think about it in terms of probability streams. There's a certain set of probabilities associated with certain outcomes and you want to make sure that you're always the house. So things won't always occur the way you think they'll occur, but if you calculate it out correctly over a series of decisions you will come out significantly ahead…

L: So that's kind of how you're thinking on a day-to-day basis, would you say?

M: Yeah, I think of the future as branching probability streams.

L: Is there any downside to having studied physics or being a physicist in your position and in your industries?

M: Definitely not. I encourage everyone to do it. The difficulty is that physics is usually so badly taught in high school and even in junior high…There's too much of the teaching of the tools and not enough of the "why the hell are we learning this in the first place?"

L: When you hire people, what are some of the top qualities or characteristics, aside from the technical know-how, that you look for in an employee?

M: In SpaceX, we're obviously trying to advance the state of rocket technology with the ultimate goal of establishing a self-sustaining civilization on Mars. In order to do that, we've got to hire people who are going to be really good at coming up with innovative solutions for all the elements of a rocket. We'll look for evidence of exceptional ability, [for example]. The grades are one assessment, but it's certainly possible for someone to game the system in college and pick the right classes and get a 4.0 and neglect everything else. So grades are one element that could suggest exceptional ability, but often more important is what someone has done in international competitions. If someone won a national science fair or created some amazing bit of electronics or software as a teenager, something like that shows initiative, innovation and exceptional technical capability. That's what I'm looking for on the engineering side.

L: What advice would you offer physics-educated professionals and early career physicists who are thinking of leaving physics for entrepreneurship?

M: [Think about] what is the thing that you want to do that you'll find fulfilling and is really useful to others, and then guide your life in that direction. In physics itself, there are only a relatively small number of people needed to advance the state of the art, particularly if it's contingent on completion of some large technical project, like the LHC. But even if someone has no intention of ultimately being a physicist, I still believe that the training of physics is excellent. So as they're going through their academic career I would recommend studying physics as a good base and then a broad range of engineering courses and then some degree of specialization in an engineering field where it fulfills someone's interest, and then arts and sciences courses, particularly history. And a few business courses are helpful so you at least know the terminology. You can probably do it with one accounting course, [although] I hate accounting. It's worth it to have some business courses but you don't need too many. And I wouldn't recommend an MBA. I'd say no MBA needed. An MBA is a bad idea.

M: It teaches people all sorts of wrong things. L: What do you mean? M: They don't teach people to think in MBA schools. And the top MBA schools are the worst.  Because they actually teach people that you must be special, and it causes people to close down their feedback loop and not rigorously examine when they are wrong.

L: But you must hire MBAs, right?

M: I hire people in spite of an MBA, not because of one. If you look at the senior managers of my companies, you'll see very few MBAs there.

L: Interesting. If you were sitting on an airplane and we were living in a vacuum and somebody said oh hi, what do you do? What would be your answer?

L: How much time do you spend on engineering problems as opposed to dealing with the business side of things?

M: Most of my week [60%] is spent in engineering meetings with my teams. I have meetings with all the technical teams at Tesla and Space X every week. The last few months I have had to spend proportionally more time on some business activities, reengineering the service and sales process at Tesla. Not my top favorite thing to do, but it needed to be done.

M: We're trying to do more of that over time because otherwise it shouldn't all just flow through me. It's quite helpful to have the synthesis of rocket technology and automotive technology because I see things that people who are just in one of those industries don't see.

L: Can you give me an example?

M: Cars are really primitive, from a structural standpoint compared to rockets, because in order for a rocket to get to orbit you have to be incredibly mass efficient, so the first stage of our rocket is 95% propellant by mass fraction. That means only 5% of the first stage is engines, electronics, wiring, airframe, and everything else. Which is really a ludicrously low number. So I'm used to extreme mass optimization in the rocket arena, and then you look at most cars: Cars have all sorts of mass in places that don't do any good and often not enough in places that are important, and almost all cars are made of not very advanced steel. The Model S is the only all-aluminum car made in North America. Since it has a very heavy battery pack, we have to offset that mass with a much lighter rest-of-car. So in order for the Model S to get the range it has, we had to conserve non-pack mass and that meant going to an all-aluminum body and chassis. There's a lot more we can do on the Model S in terms of mass optimization but it was necessary to still be at a mass at the end of the day that's the same as a gasoline sedan even though you have this heavy battery pack.

L: When do you think "ordinary" people will be able to afford space travel in the same way we go on cruises, for example?

M: It depends on where in space [you're talking about]. If [it's] where the atmosphere is thin, that's actually relatively easy, because you just punt up and pull down and that's a 5-minute ride. If you want to go to an orbit, that's two orders of magnitude greater energy requirement and then you've got to weed off that energy on the way back, so that's a lot harder. I can see orbital travel ultimately getting to…maybe 100-200 thousand…and then the holy grail is to try to get the cost of going to Mars to under a half a million dollars. That's the critical economic activation energy needed to have a self-sustaining civilization on Mars. A final comment: A lot of people in physics are concerned about expenditures on manned space flight because they are not sure what's the point. Generally I would agree: if we were just going to bounce around in low Earth orbit, it's questionable whether it's worth the expense. However, if one considers the objective to become a space-faring civilization and a multi-planet species, I think that physicists should support that because it increases the probable lifespan of humanity dramatically, and dramatically increases the scope and scale of civilization, which in turn is what will lead to greater enlightenment in physics and other arenas.

L: Will physicists inherit the world?

Alaina G. Levine is a science writer and President of Quantum Success Solutions, a science career and professional development consulting enterprise. Her new book on networking strategies for scientists and engineers will be published by Wiley in 2014. She can be contacted through www.alainalevine.com or via twitter @AlainaGLevine.