US Team Ties for Second in International Physics Olympiad 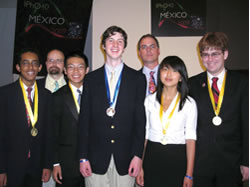 The traveling team representing the US at the 2009 International Physics Olympiad won four gold medals and one silver, tying with India and Korea for second place overall. This high placement duplicates last year’s outcome, and is the US’s best standing to date.

The Olympiad is an annual international competition for high school students. In the 2009 Olympiad, held in Merida, Mexico from July 11th to the 19th, 316 students representing 70 nations competed to solve complex physics problems. Gold medals are awarded to students whose total scores from the five tests were in the top 8 percent, and silver went to students in the top 25 percent.

“They all did very well,” said Paul Stanley, the team’s academic director. “Much of the success of the traveling five can be attributed to the collegial, supportive atmosphere of training camp; I thank each of the nineteen team members for working so hard to make this one of the best teams ever.”

The exams consisted of three theoretical problems and two lab experiments. This year’s subjects ranged from calculating the tidal drag affecting the moon to measuring the wavelength of light using a razor and a pair of vernier calipers. All of the team coaches graded the exams, so to maintain secrecy the students spent most of their time with host guides.

The closing ceremony was held at the grand Peon Contreras Theater where several officials spoke and a local mariachi band performed. On the days the students were not competing, the Olympiad committee sponsored excursions to some of the nearby Mayan ruins throughout the Yucatan Peninsula including Uxmal, Dzibichaltun and Chichen-Itza. They also featured a series of three science lectures in the evenings, including one by Nobel laureate Joseph Taylor.

The Olympiad was first held in 1967 in Warsaw, Poland for the nations of Eastern Europe. During the 1970s the competition expanded to the rest of Europe and later the rest of the world. In 1986 the United States sent its first team to the competition in London and returned with three bronze medals, the best any team had done on its first outing.

The American Association of Physics Teachers and the University of Maryland have organized and trained each US team since the beginning. More than a dozen other organizations, including the APS and the American Institute of Physics, also help to sponsor the team.