Physics is Olympians’ Idea of a Good Time 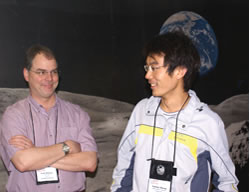 Olympian Yunfan Zhang (right) takes a break from the rigors of the training camp to enjoy a moment of conversation with coach Paul Stanley.

In a small classroom at the University of Maryland, nineteen pairs of eyes stare attentively at a blackboard full of a complex array of quadratic equations. Though the physics on the chalkboard is distinctly college level, the class is composed entirely of high school students. This is the training camp for the 2009 International Physics Olympiad’s US Team. At the end of the ten-day preparatory camp, five of the nineteen students were selected to travel to Mexico for this year’s international competition in July. Though only the five students were selected to go, all nineteen kids in the classroom represent some of the brightest scientific minds in the country.

The International Physics Olympiad is the global zenith for high school physicists. Each year teams of high school students from over sixty different countries vie for the gold by unraveling complex physics problems during the nine-day competition in mid July. Organizers of both the international event and the training camp strive to advance physics education and reward students that have distinguished themselves in the field.

The Olympiad began in 1967 in Eastern Europe and expanded during the 1970s to include the rest of Europe and later the rest of the world. The United States first participated in 1986 when its team brought back three bronze medals from London, the best any team had done on its first outing. The American Association of Physics Teachers along with the University of Maryland have organized and trained each US team since the beginning. More than a dozen other organizations including APS and the American Institute of Physics also help to sponsor the team.

“It’s been really intense but really really worth it,” said Oreman upon learning he had been selected to the final delegation, “I’m really thrilled, it’s going to mean a lot more work, but it’s definitely worth it.”

Getting through to the Olympiad has been quite a feat for the students. To make to the training at UMD, each student passed through a rigorous selection process. More than 4,000 students from over 350 schools across the country took the preliminary first round test. Dubbed the “F=MA Exam,” the multiple choice test focused primarily on introductory mechanics.

The top 400 scorers on the test moved on to the quarterfinals. There, students were given three open-ended problems on a much broader range of topics. From there, the top 150 scorers took a third quiz, six problems long, from which the final group was selected to attend physics camp. All of the students attending the camp are considered part of the US team, and the five selected at the end of the camp make up the traveling team.

After the camp concludes, the members of the traveling team are sent home with a hefty packet of homework, mostly problems culled from previous Olympiads. There’s a brief, three-day refresher camp held in mid July right before the traveling team jets off to the city of Merida on the Yucatan Peninsula.

At the Olympiad, the US team will face off against over sixty countries on three complicated theory problems and an experimental lab. Last year the United States placed second overall, its best standing yet. The US Team generally places in or near the top ten in the world, facing some of the toughest competition from nations such as China, Russia, Vietnam, and Iran.

To prepare for this challenge, the training at physics camp was rigorous and intense. For ten days straight the students rose early to face a full schedule of lectures, labs and practice exams. Topics ranged from basic wave mechanics and oscillations to relativity and other modern physics.

“It’s tiring after a while,” said junior Dan Li, who attended last year’s camp as well, “It’s a lot of fun getting to work on physics without distractions, but after a while you do need time to relax.”

“It’s gotten to the point we can’t work them much harder and probably shouldn’t work them much harder,” said Andrew Lin, an assistant coach. Lin started out as a member of the team eleven years ago, and has returned each year to help coach. He said that since then, “the Olympiad has grown…I’d like to think that it’s improved [and] I think the students are better.”

Despite the intensity of the training, there’s very little jockeying for position for a coveted spot on the traveling team. Instead there is a strong sense of camaraderie among the students.

“I never felt that the camp was about fostering competition over the five traveling team spots,” said Marianna Mao, “Physics is our idea of a good time.”

The coaches have sought to foster this collegial spirit amongst the students. Paul Stanley, the academic director for this year’s team, said that they want to establish an environment where the students can both shine academically and enjoy themselves while meeting other like-minded high school students.

“They love it,” Stanley said. “They can be who they are without being self conscious about being the only kid in the room who likes physics.”