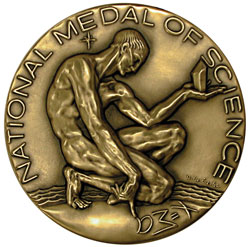 President Bush presented the medals in a ceremony at the White House on September 29.

El-Sayed was cited “for his contributions to our understanding of the electronic and catalytic properties of nanostructures and nanomaterials.”

Ajzenberg-Selove was cited “for her contributions in nuclear physics that have advanced research into applications including energy generation from fusion, dating of artifacts, and nuclear medicine.”

Slichter was cited “for establishing nuclear magnetic resonance as a powerful tool to reveal the fundamental properties of molecules, liquids and solids, enabling the development of numerous modern technologies.”

Wineland was cited “for his outstanding leadership in the science of laser cooling and manipulation of ions, that have had multiple applications in modern physics.”

In addition, APS member C. Grant Willson of the University of Texas at Austin was among the recipients of the 2007 National Medal of Technology. He created novel lithographic imaging materials and techniques that have enabled the manufacturing of smaller, faster and more efficient microelectronic components.