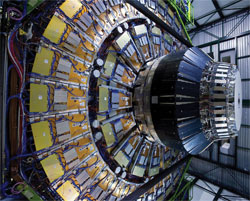 Lowering of the final element (YE-1) of the Compact Muon Solenoid (CMS) detector into its underground experimental cavern.

Proton Beam Trip Around the LHC

Kate McAlpine is a science writer with the ATLAS collaboration at CERN and a former science writing intern at APS. She has recently received a lot of attention for her video, “Large Hadron Rap” (Check it out on YouTube). Here she gives her impressions of the startup of the LHC and the months leading up to it.

After more than two decades of planning, over a decade of digging and building, the Large Hadron Collider and its detectors are finally complete. The first beam of protons ran through the accelerator ring on September 10th, and collisions are expected before the year is out.

If you think of the project as a marathon, I’ve been running alongside for the last mile. Work on the LHC started in the early 1980s, and official planning began in 1984–five years before its predecessor in the tunnel, the Large Electron-Positron collider, had even started up. But from late October last year, I saw many of the last pieces set into place in the experimental halls. I visited the detector caverns, guiding journalists around CERN, and listened in on conversations about the progress of construction as well as the discoveries that physicists hope to find in the data to come.

Although the years of preparation might make it seem like teams were taking their time, it quickly becomes apparent that most of the physicists are putting in long hours. I came to work, having realized too late that it was a CERN holiday, the day after LHC start-up. To my surprise, it seemed that at least a third of the usual population was also at work.

Pawel de Barbaro, a Polish physicist in CMS (one of the major LHC detectors) employed by the University of Rochester, pointed out, “From the construction point of view, I think it only makes sense to build the detector right. We’re building a very complex detector, and we’re building it for first time, so unpredictable problems are bound to appear.”

Lyn Evans, LHC Project Leader, often remarks that the accelerator “is its own prototype.”

In one of my favorite posts from US LHC blogger Monica Dunford, a post-doc at the University of Chicago, she compares working on ATLAS (another major LHC detector) to a training exercise, in which she had to negotiate a difficult trail–running as fast as she could with a teammate pursuing her. Looking back could result in a stumble, and she would lose more time. The four main detectors all needed to be ready before the LHC, or at the very least, before the other three detectors. It’s not really possible to look back and see how close the others are to completion, so everyone works as hard and fast as they can to avoid coming in last.

I followed the race by watching pieces of hardware entering the caverns. The most impressive “lowering” that I saw was the last slice of CMS, a 1430 ton disk of iron and particle detectors, 52 feet tall. Starting shortly after 6:00 a.m., the equipment didn’t complete its 300-foot journey until about 5:30 that evening.

That day, I guided a film crew working on an artistic documentary. The director, Peter Mettler, was surprised that the descent was so slow–barely noticeable as we looked on. Looking toward the Alps that night, reflecting on the day, he compared the descent to the speed at which the moon seems to rise.

While cavern security required an access card, helmet, and closed-toed shoes during that January lowering, I was receiving sideways looks for not wearing safety boots by the time I finished as a guide in April, even on the well-traced visitor pathways.  By the end of May, they had activated the retina scanners, glowing blue in the access gates.

One of my favorite analogies for building the LHC came from Michael Schmitt, of the University of Illinois Urbana-Champaign. He thought of it as a car, “built in pieces by amateurs around the world.” Having brought all the pieces to one place and assembled the machine, “we’ll turn the key and see if it starts.”

Luckily, it has. At 10:26 on the morning of September 10th, the LHC beam physicists breathed their sighs of relief or shouted their cheers as the first bunch of protons went full-circle in the 27-kilometer ring. The detectors received what seemed, after the months of relatively infrequent cosmic rays, a blast of data from the single beam hitting what little particle debris remains in the vacuum of the beam pipe. With a couple of months to refine calibrations on the detectors and the accelerator itself, everyone at CERN is looking forward to the collisions to follow.