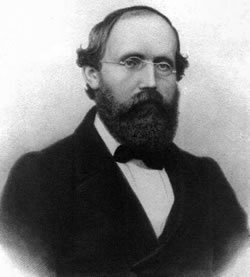 Albert Einstein changed our view of the universe in 1915 when he published the general theory of relativity, in which he set forth the notion of a four-dimensional spacetime that warps and curves in response to mass or energy. The geometric foundation for his work was laid some 60 years earlier, with the work of a German mathematician named Georg Friedrich Bernhard Riemann.

Born in what is now the Federal Republic of Germany in 1826, Riemann was the second of six children of a Lutheran pastor, who taught his son until he turned ten. The young Riemann was shy and nervous, but gifted in mathematics–so much so that while attending high school in Hannover, his knowledge sometimes surpassed that of his teachers. In 1846, his father scraped together sufficient funds to send his son to the University of Göttingen, where Riemann initially intended to study theology so that he could help support his family. But then he attended lectures by Carl Friedrich Gauss and Moritz Stern, who inspired him to switch his studies. With his parents’ blessing, Riemann transferred to the University of Berlin the following year, studying under some of the most prominent mathematicians of his time.

Two years later, in 1849, he returned to Göttingen to pursue his PhD with Gauss, completing his thesis in 1851 on the theory of complex variables, the basis for what we now call Riemann surfaces. Gauss described Riemann as having “a gloriously fertile originality” in his report on the thesis, and two years later, when Riemann was required to give a lecture to land a faculty position at Göttingen, Gauss assigned his star pupil the topic of the foundations of geometry–a seemingly mundane topic in the hands of a lesser mathematician.

Riemann did not disappoint his mentor, despite a phobia of public speaking. He used the opportunity to develop a highly original theory of higher dimensions, described in a lecture –“On the Hypotheses Which Lie at the Foundations of Geometry”–delivered on June 10, 1854, that included a workable definition of how one might measure the curvature of space. It wasn’t published until two years after his death, in 1866, and is now considered one of the most important works in geometry.

The lecture consisted of two parts. First, the question of how we might define an n-dimensional space resulted in the definition of Riemann space, including the Riemann tensor. This laid the foundation for the field of Riemannian geometry. For the second part of the lecture, Riemann discussed the dimension of real space and what geometry one should use to describe it.

The lecture was a resounding success, despite the fact that Riemann’s ideas were so advanced that only Gauss fully appreciated their profundity–Gauss had, after all, done important work early in his own career on the theory of surfaces in two dimensions, making it possible to precisely evaluate curvature mathematically. And in an 1824 letter to Ferdinand Schweikart, Gauss had speculated on the possible curvature of space, admitting, “I have from time to time in jest expressed the desire that Euclidean geometry would not be correct.”

Riemann went on to make valuable contributions to analysis, number theory, and complex manifold theory, among other areas. An attempt by his mentors to appoint Riemann a chair at Göttingen failed, although the university did appoint him as a professor in 1857, with a regular salary. That was the same year he published his work on abelian functions, picking up where his doctoral dissertation had left off and extending further his ideas on the topological properties of Riemann surfaces. He finally earned his chair in mathematics at Göttingen in 1859, and was elected to the Berlin Academy of Sciences in the bargain. In 1862, he married a friend of his sister’s, and fathered a daughter.

But his personal and professional happiness was short-lived. Later that year, Riemann–who had never been very healthy–came down with a severe cold that developed into tuberculosis. He spent that winter in Sicily’s warmer climate, but never fully recovered. He went back and forth between Göttingen and Italy for the next several years as his health deteriorated, and died on July 20, 1866, at age 39, while recuperating on the shores of Lake Maggiore. There is speculation that a housekeeper tidying up the clutter in his office after his death may have discarded several unpublished works.

Riemann’s influence on math and physics remains undiminished. “Physicists were still far removed from such a way of thinking,” Einstein later observed of Riemann’s work.

“Only the genius of Riemann, solitary and uncomprehended, had already won its way by the middle of the last century to a new conception of space, in which space was deprived of its rigidity, and in which its power to take part in physical events was recognized as possible.” Mathematicians are still grappling with the repercussions of his ideas today.

In addition to Einstein, Riemann’s seminal contributions to geometry likely inspired Lewis Carroll, a.k.a. Oxford math professor Charles Dodgson, when he wrote Alice in Wonderland and Through the Looking Glass. Dodgson was a traditional Euclidean at heart; he liked his spaces flat. In many respects, the absurdity of the imaginary world he created for Alice mirrored the intellectual upheaval of late 19th century mathematics, in which scholars grappled with a topsy-turvy looking glass world filled with curved space and imaginary numbers.