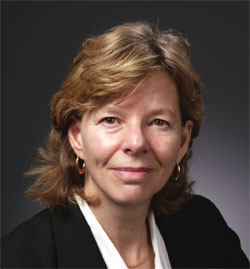 Cherry Murray (Deputy Director for Science and Technology at Lawrence Livermore National Laboratory,) assumed the APS presidency on January 1, 2009. In the following interview with APS News, she discusses her priorities for the Society during her presidential year.

Q: What do you see as the most pressing issues facing the physics community right now?

A: Obviously there are some major issues at the forefront. First, let me start out with the challenges facing the nation and also the globe: national security, energy security, environmental security, and human health. And on top of that there’s the global financial crisis and US economic security. All of the challenges facing the globe require the underpinning of an incredibly strong and vital science and engineering enterprise.

First, The Rising above the Gathering Storm Committee at the National Academies, on which I served, identified several areas of concern where I believe APS can play a role: the gathering storm that we see in this country is a lack of a future science and engineering workforce and plan for retaining our high tech economic sector that drives the rest of the economy. We have fallen down considerably. The US has become much too complacent. What APS can do is help to provide science teachers, and in particular physics teachers. The PhysTEC program is an excellent example of this. APS can also work to make sure that the US is getting the best and brightest into our higher education system, giving incentives for the foreign graduate students in the US to stay in the US, and increasing the number, the caliber and the diversity of our US citizen students, increasing our research funding to academia and national labs, and then providing incentives to industry for high-paying jobs in the US.

Second, it is really important that we have a strong science diplomacy effort. For example, Palestinian, Israeli and US scientists are working together on water issues in the desert. This is some of the best diplomacy that we can possibly do. I’m hoping that AAAS, which has a new science diplomacy center just established, APS, with its strong Forum on International Physics, the National Academies, and other societies can work together with the State Department, to promote this.

The third point has to do with the changing nature of the research enterprise in the 21st century. The global problems–and 21st century science–are multidisciplinary, and usually require teamwork. I believe that physics is a way of looking at the world and understanding how to solve problems. Physics thinking is very important in addressing these societal challenges and for advancement of science in general. I’m very supportive of the APS initiative to double the number of physics majors in the US. I expect that many of those majors will go on to different fields, including all of the branches of science and engineering, but also the law profession, social science, and government. I really do believe we need to have more science knowledge in government.

Q: What will be your focus during your presidential year?

A: We need a long-range plan for how the nation is going to address all of these challenges. Physics can play a huge role. I would like to see APS work with the National Academies and other professional societies to provide a unified picture. I am also the chair of the Division of Engineering and Physical Sciences at the National Research Council and I’m on the AAAS board. I think APS can be a leader at bringing the societies together.

For APS, I plan to focus, very much like APS past-president Helen Quinn did five years ago, on stepping back and looking at what we want to do in the future and how we are going to accomplish everything that we set as our goals. APS has a new opportunity and challenge, which is that the three top executives of the organization will all be relatively new, and I believe this is a time to look at an updated strategic plan for the Society.

Q: The APS has been trying to increase its efforts in education and outreach. How do you view those efforts? What suggestions do you have for guiding those efforts?

A: I think the focus on PhysTEC is exactly right. Expanding that program, which APS Director of Education Ted Hodapp has a proposal to NSF to do, is very important. Also, doubling the number of physics majors is critically important. A number of physics departments have already doubled the majors in physics and have exceptionally vital undergraduate programs. They are providing a real, exciting view of what you can do as a physicist. And as they’re doing this, far more women are coming into the field. Another thing we need to work on is getting more underrepresented minorities into the mainstream, We also must continue our outreach efforts.

A: I think it’s critically important. APS in general has done a very good job. The APS Panel on Public Affairs and its Physics Policy Committee have done exceptional jobs and should continue to be at the forefront of writing reports and counseling government. For example, the energy efficiency report that was released a few months ago has gotten quite a bit of very good press and congressional attention. The APS-AAAS nuclear weapons workshops last year brought the community together to focus on the fact that the US needs to have a new outlook on nuclear weapons and nonproliferation in the 21st century. These things have been quite influential and we need to continue doing them.

Q: How well is the society serving its members? Are there any areas where you think APS programs could be enhanced?

A: I think for the academic members the Society is doing quite well. We should address, as part of the strategic planning, how to provide peer review at the lowest cost. We need to look at how APS journals could migrate to something like Open Access. APS already provides the journals free to the third world. APS must remain at the forefront of disseminating physics to everyone, including the use of more technology to include more international folks at our meetings. We have to do it with a business model that is consistent with doing all the other things that APS does and should do.

For those working in industry or government labs, which is about 2/3 of physicists, APS has not done as well. I think by being more inclusive, we can be better equipped to help those who get degrees in physics and go off into another field. What would be wonderful is if those people still considered themselves as physicists. Part of what we do to be more inclusive could include partnering more with the American Institute of Physics and other societies.

The other cohort that is absolutely critical is students. We need to be more inclusive of students in our meetings and focus on career development. Executive Officer Judy Franz was very successful in increasing the number of student members, and we have graduate student-run meetings and undergrads coming to meetings. I think we need to do more of that.

Q: How can we ensure APS has funds for all of these critically important programs in this difficult economic time?

A: That is a good question! This is one of the reasons I would like to do this strategic planning exercise, which looks at what do we expect to do with our business model. We’ve been quite successful in the 21st Century Campaign for Physics, which funds a number of these educational and outreach programs. I believe we’re going to have to continue to campaign to provide funding, but this is going to be really tough given the financial situation.

A: I come from a family of artists. I became interested in science for two reasons. First of all I had a spectacular chemistry teacher in high school. He got me excited about science. I have noticed that it is usually the case when you ask scientists what got them into science, it’s a teacher of some sort, which is why we really need to focus on getting the best quality science teachers in our schools.

The second reason I decided to choose physics was that my brother, who is nine years older than me and went to MIT, made a comment to me, “there’s no way you would ever succeed in physics at MIT.” I applied to MIT, I got in, and I went and majored in physics. It was partly because I really liked science, but also the challenge he set. I was really excited by the fact that you could do research right away at MIT, and that was so rewarding I stayed in the field.

Q: What have been your career highlights?

A: I spent about nine years actively engaged as a bench research scientist at Bell Labs and I absolutely loved it. Then I was convinced to go into management, and I had a career in management and research there for another 16 years, which was very challenging, but also very rewarding. The third part of my career, I’ll call public service, because I’m now working at a national lab and doing a great deal of work with APS, with the National Academies, and on various committees. Through this whole career I’ve gotten to understand the research enterprise as a whole, and that’s also very rewarding. Whatever I’m doing, I would like to have an impact. And I believe I have had an impact in all three areas.