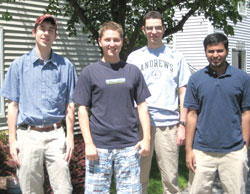 When LIGO announced last September that the upgrade to Enhanced LIGO would take its two largest interferometers off-line from October 2007 until early 2009, a handful of physicists winced, and recalled a similar situation in 1987. That year, all available bar detectors went off-line simultaneously and missed the 1987a supernova. Concerns were raised that LIGO might miss the gravitational wave signals from a gamma ray burst or supernova like 1987a—which it might have been able to detect—and have to wait who-knows-how-long for another one. Meanwhile, LIGO’s smallest interferometer—the 2-kilometer-long H2 located at the Hanford, Washington facility—would be unable to operate during the daytime hours because of the significant seismic activity created by the construction. Plus, the operators would be occupied with the upgrade, and there wasn’t funding to pay a new team.

It was looking like LIGO would be sitting out until 2009, when Keith Riles of the University of Michigan and Fred Raab of the LIGO Hanford observatory persuaded graduate student Evan Goetz to take up the reins. Willing to work odd hours for no pay, graduate students seemed like the perfect candidates–maybe the only candidates–to keep LIGO running. Now, Goetz is heading up Astrowatch–an effort to keep H2 staffed and running until the upgrade is complete.

The Astrowatch program is a tough one. Since the program started in February 2008, graduate students have arrived from as far away as Germany and Spain to stay at LIGO for at least three months. Ideally, six to eight of them will share the evening and nighttime shifts, with two students per shift. Then there’s work and maintenance to be done during the day, and the students have to keep up with their own research as well. Training on these very complicated machines takes at least a month. Those who stay for over six months will receive free housing from LIGO, but otherwise they all go unpaid; living off of their usual stipend from their home universities. Goetz admits that it takes “a certain caliber of student” to handle the tough hours and complex skill set.

Goetz has been working on his PhD thesis at the Hanford, Washington facility for two years.  Talking with him, he hardly seems like he was coerced into running Astrowatch. In fact, he’s enthusiastic about what he sees as a once-in-a-lifetime opportunity.

During normal science operations, LIGO allows only its highly trained operators to run the instruments, in order to keep data collection at a maximum. Short windows of downtime are the only opportunities that students have to interact with the interferometers.  With Astrowatch, students can run experiments and tests on all of the H2 systems. They’re in charge of doing everything from data collection to weekly maintenance tasks. “I think it’s an incredible skill for anybody who’s going into academia with relations to the LIGO project: to really understand where the data is coming from,” says Goetz.

To confirm a gravitational wave detection, LIGO is operating in coincidence with the GEO600 interferometer in Germany. A similar comparison is usually made between the two larger LIGO detectors. While the odds of a supernova occurring in our neighborhood in the next year may be only a few percent, it should still come as a relief that someone will be watching. As Goetz says, even if they don’t detect anything, the project will have been extremely beneficial to those who participated. Of course, there is still hope for glory, and the chance to make a great discovery; the possibility that a group of graduate students could successfully collect gravitational wave signals, some late night in Washington.