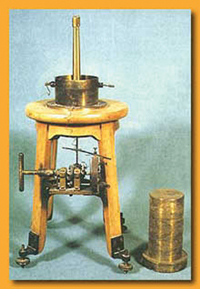 The caption on a photo in "This Month in Physics History" in the December 2004 issue of APS News says "Pierre and Jacques Curie's electrometer." [see accompanying photo—Ed.] The Department of Physics of the University of Colorado has an apparatus that is quite similar to the one shown. Our device is a high-impedance voltage source which was used to charge gold leaf electroscopes that measured ion currents in ion chambers. The source of the high voltage is the potential difference that is developed across the two faces of a crystal that is about 20 x 4 x 0.2 cm. At the top of the apparatus in the photo is what appears to be one tall post. There are actually two posts which are lined up one behind the other in the photo. The long crystal is hung from a cross piece that joins the tops of the two posts. A rod attached to the lower end of the crystal passes through the circular wooden table, and masses can be hung on a hook on the lower end of the rod to apply a desired stretching force on the vertical hanging crystal. The two faces of the crystal are covered with what appears to be tin foil, and two flexible brass arms touch the two sides of the crystal to conduct the charge to the two terminals. These can be connected to a gold-leaf electroscope. The cylinder on the table to the right is a brass cover that protects the hanging crystal from dust. On the cover of ours is the following inscription: "Quartz Piezo Electrique; de P. Curie; No. 32; Societé Central de prod. Chemiques; 44 Rue des Ecoles, Paris".

I have tested this apparatus by hanging masses on the bottom of the crystal and observing the resulting deflection of the gold leaf of an electroscope. Then separately, with an electronic power supply I charged the electroscope to the same deflection and found the potential difference generated by the crystal to be approximately 400 volts. I do not know the function of the apparatus mounted midway up on the four wooden legs. It might be a mechanical system for applying known forces to the crystal and measuring the resultant elongation of the crystal. I have seen a number of photos of Marie Curie in her laboratory with this apparatus and a gold leaf electroscope appearing side by side.