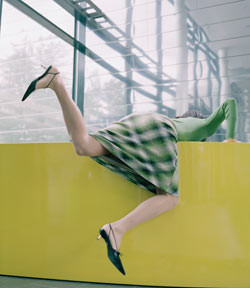 The Physics of High Heels

England, the country that nurtured the genius of Isaac Newton, has now applied the brains of its physicists to a modern conundrum: What is the height of the heels that Sex in the City's Carrie Bradshaw could wear without falling over or cramping up in pain?

The answer, as calculated by Professor Paul Stevenson of the University of Surrey, is as complicated as contemporary dating. If Bradshaw, the show's fashion mad lead character, is wearing shoes she really likes, cost a lot, and are the latest thing, she can sashay about easily in a pair of her beloved Manolo Blahnik stilettos that top out at over five inches or almost 13 centimeters tall. If she has spent the night toasting the end of the television series, then she had better think about not wearing shoes with heels higher than about an inch because the alcohol will upset her equilibrium.

Stevenson made the calculation after Dianne Stilwell, a publicist with the London-based Institute of Physics, sat mesmerized before the next to last episode of the series, which ended in Britain last week and concludes on Friday here. "I sat there thinking: How can she wear heels that height? There must be some kind of formula that says you can only go so high before you fall over," Stilwell said.

She then went over to the physicists at Surrey with her curious question. Stevenson took up the challenge and came up with h=Q x (12+3s/8)—a formula that expresses the maximum heel height you can go without tipping over. In this case, h is the height of heel, s is the length of the shoe (as measured by the UK shoe size) and Q is a variety of sociological factors. The numbers express how changes in foot slope increase tippiness.

In essence, the formula says that the sharper the angle of the foot in the shoe—what Pythagoras described as the hypotenuse of a triangle in his mathematical studies in the sixth century BC—the more unsteady you become. "You have a small area that is supporting all your weight, and it is hard to keep your balance on a small area," is the simplified explanation of the formula, according to Stevenson. This translates into a situation where five inches is about the height at which an experienced high heel wearer could remain stable.

The British physicist acknowledges that a scientific publication would want an equation that more quantitatively expressed the pain that increasingly higher heels cause the wearer. As well, the equation is entirely based on a stiletto model for the heel. A broader heel would keep the wearer steadier.

What the quantification does not address is how much pressure a woman stumbling about in high heels would exert if she stepped on you. For that the British physics institute directs people to its web site where it records that a 100 pound woman in stilettos will exert pressure under her foot that is 20 times that of a 6,000 pound elephant.
Reprinted with permission from The Globe and Mail.

How High Can You Go?

The maximum heel height formula is based on shoe size and an elusive Q factor,
which takes into account sociological factors such as how shoe stylishness
increases a woman's ability to tolerate pain.
h=Q x (12 + 3s/8)
h is the maximum height of the heel (in cm).
Q is a sociological factor and has a value between 0 and 1.
s is shoe size (UK ladies sizes).

p is the probability that wearing the shoes will turn heads.
y is the number of years experience you have wearing high heels.
L is the cost of the shoes, in British pounds.
t is the time since the shoe was the height of fashion, in months.
A is unit of alcohol consumed.
Source: Institute of Physics

Editor's Note: This article first appeared on March 24, 2004, in "...the Globe and Mail, Canada's national newspaper." Reprinted with permission. Kudos to AIP's Inside Science News Service for finding it and posting the link on their website.