Dresselhaus To Chair AIP Governing Board 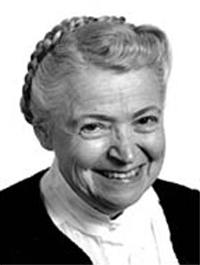 Former APS President Mildred Dresselhaus, professor of physics at MIT, has been selected as the first woman to chair the Governing Board of the American Institute of Physics (AIP). She was only the second woman to serve as APS president, and will succeed John A. Armstrong, who is stepping down as AIP chair after five years.

Dresselhaus received her PhD from the University of Chicago in 1958, and her physics research has produced key breakthroughs in understanding carbon nano-tubes. In addition to 35 years of teaching and mentoring both male and female students, Dresselhaus has extensive experience as a leader of scientific societies. In addition to her term as APS President in 1984, she also served as treasurer of the National Academy of Sciences and president of the American Association for the Advancement of Science. She was director of the DOE Office of Science, and is a recipient of the National Medal of Science.

"AIP is important to me and to all physicists. I am very much looking forward to this new opportunity to serve the physics community," said Dresselhaus of her selection. "As I get into the job I hopefully can find areas where I can have special impact. My experiences all give me some perspective that should help me in this new position."