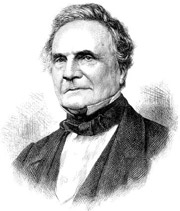 Few 19th century devices have had as much influence on modern technology as Charles Babbage's calculating engines, most notably the Analytical Engine, a mechanical digital computer which anticipated virtually every aspect of present-day computers. First described in 1837, his vision of a massive brass, steam-powered, general-purpose mechanical computer inspired some of the greatest minds of the 19th century, but he failed to persuade any backer to provide funds to actually construct the device. However, his ingenuity earned him recognition as the "father of computing" more than 100 years after his death.

The son of a London banker, Babbage was a tinkerer from birth, doing little else with his toys save dissecting them. He taught himself algebra as a youth, and was so well read in the continental mathematics of his day that when he entered Trinity College, Cambridge, in 1811, he found himself far in advance of his tutors in the subject. With friends, Babbage co-founded the Analytical Society for promoting continental mathematics, and reforming the math of Newton currently taught at Cambridge. Most notably, he and his friends effected the crucial introduction of the Leibnitz notation in calculus, transforming mathematics throughout Great Britain.

As a young man, Babbage worked as a mathematician, was duly elected a Fellow of the Royal Society, and played a prominent role in the foundation of the Astronomical Society (later the Royal Astronomical Society) in 1820. Around the same time, he developed his lifelong interest in calculating machinery. In 1821, Babbage invented the concept of the Difference Engine to compile mathematical tables. The Difference Engine Number One (DE1) was the first successful automatic calculator and remains one of the finest examples of precision engineering of the 19th century. It created tables of values by finding the common difference between terms in a sequence, limited only by the number of digits the machine had available. Babbage's idea was that astronomical tables could be printed out using such a machine, as well as simple lists of prices for a butcher's shop that charged by the pound.

Although he refined this concept with the Difference Engine Number Two (DE2), Babbage was never satisfied with his work and could never stick with a single blueprint for it. He spent thousands of pounds of government funding to rebuild the same parts over and over to refine them. Never actually completed or used, the Difference Engine's main contribution to the world ended up being the ideas it inspired in Babbage's mind, leading to his next engine, and ultimately to modern computer programming.

In 1832 he conceived of an even better machine that could perform not just one mathematical task, but any kind of calculation. Intended as a general symbol manipulator, the Analytical Engine was a flexible and powerful punched-card-controlled calculator, embodying many features which later reappeared in the modern stored-program computer: punched-card control, separate store and mill, a set of internal registers (the table axes), fast multiplier/divider, and even array processing. He resigned his prestigious professorship at Cambridge [the Lucasian chair once occupied by Sir Isaac Newton] in 1839 to devote his full attention to the analytical engine, but never succeeded in completing any of several designs for it.

Unfortunately, little remains of Babbage's prototype computing machines. The critical tolerances required exceeded the level of technology available at the time. And although his work was formally recognized by respected scientific institutions, the British government suspended funding for the Difference Engine in 1832, ending the project completely in 1842.

Despite his many achievements, the failure to construct his calculating machines, and the failure of the government to support his work, left Babbage in his declining years a disappointed and embittered man. He died on October 18, 1871, without ever realizing his dream, and although his son Henry continued his work, he never successfully completed the device. It was only after the first electromechanical-and later, electronic-computers had been built in the 20th century that designers of those machines discovered the extent to which Babbage had anticipated almost every aspect of their work.

Babbage's difficulties were primarily financial and organizational; the project itself was perfectly feasible. A team at London's Science Museum-led by Doron Swade with important contributions from D. Allan Bromley, among others-successfully built a completed version of Babbage's DE2 in the 1990s, vindicating the man's technical work, which is now prominently displayed in the museum. However, the far more ambitious task of constructing the Analytical Engine remains to be undertaken.