Science Education is Not Just for Scientists 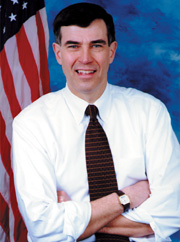 It's an exciting time. Information today speeds around the globe with the click of a mouse, making our world smaller and our opportunities bigger. Biologists are unlocking the strands of our DNA and the code of the human body. Scientists are working to identify and mitigate global climate change and to discover cleaner energy sources.

In the hundreds of years since Galileo proposed his groundbreaking theories about our universe, mankind has come a long way in its understanding. But there are still a universe of questions left to answer. We still don't know how to cure cancers or AIDS, or completely ease the suffering of those with mental illness. We still have tremendous challenges regarding the way we produce and consume energy. And we still don't know all we should about our planet and the people who live on it.

The answers to these important questions are beginning to be formed in our classrooms with young students who one day may go on to investigate these issues and make advances that will benefit all of us. Most of our students, though, would be hard-pressed to explain or apply any of the lessons of Galileo-or any other scientist. We must ensure that we not only provide our young people with a top-notch education generally, but also provide them with a quality education in math and science specifically. We must help all students learn to frame questions that they can answer empirically. In other words, we must help them to do science.

It is time for a new, major national effort to improve science and mathematics education.

Following the launch of Sputnik in 1957, major steps were taken in the US to improve the resources going into science. The goal was to produce a generation of superior scientists and engineers through increased funding for school laboratories, revision of the math and science curriculum, and new university scholarships for future scientists. Indeed, this initiative produced a generation of scientists and engineers who have contributed greatly to our economic and technical accomplishments of recent decades.

I, like many other APS members, was a product of that revolution. However, today as a policy maker, I see the shortcomings of our earlier revolution in science and mathematics education. Too often, the push for improving the competence in science and mathematics has been just for reasons of economics or national security. It should also be for personal well-being and for the well-being of our democracy. Mathematics and science bring order, harmony, and balance to our lives. They teach us that our world is intelligible and not capricious. They give us the skill for lifelong learning, for creating progress itself. From the evidence we currently have at hand, it is clear that we are not providing this quality education in mathematics and science to our students.

I am proud to have served on the National Commission on Mathematics and Science Teaching, chaired by former Senator and astronaut John Glenn, and including leaders from industry, academia, and professional education organizations. The Glenn Commission, as it has come to be known, was established to improve the presence and quality of math and science education. In its report, Before It's Too Late, it identified teaching as the most powerful instrument for reform, and thus the place to begin. Specifically, it called for major changes throughout the teaching profession, the scientific professions, and the institutions that produce our teachers.

Our country must devote attention to the quantity, quality, and professional work environment of our teachers. There are two very important, although often neglected, principles that are critical to the success in this effort:

Everyone can learn science. And excellent teaching can be learned.

In the next ten years, we will have to hire 2.2 million teachers just to stay even with the attrition of our teaching force. Most of these teachers, including all elementary school teachers, will be called on to teach science. Many will feel inadequate to teach it.

That should not surprise us. The post-Sputnik push elevated scientists to an elite. It conveyed the message that science and mathematics is only for trained experts and school teachers could not possibly master the intricacies of the fields well enough to be truly competent. This attitude, coupled with a sense that teachers are born to the job and either have the knack or not, has resulted in many teachers and hence many students not getting the education they deserve and need.

We must change this attitude by significantly increasing the number of teachers who feel qualified to teach math and science, and by changing the environment of professional development to create an ongoing system of improvement.

Congresswoman Connie Morella and I have taken the Glenn Commission's recommendations and introduced legislation that seeks to make these changes. The National Improvement in Mathematics and Science Teaching Act (H.R. 117) would establish a new Title in the Elementary and Secondary Education Act to improve the quality of our math and science education.

Specifically, this Glenn Commission bill would establish state assistance grant programs to recruit quality teachers into this field, to improve the professional development of our math and science teachers, and to address the achievement gap in these subjects. Under these programs, every state would receive funding and could use it in a variety of authorized ways that are designed to give the state flexibility while addressing these specific areas. For instance, states could establish a loan forgiveness program, signing bonuses, or even a career ladder to recruit new, qualified math and science teachers.

This bill would also establish 15 John Glenn Academies to recruit recent college graduates and mid-career professionals to compete for 3,000 prestigious, one-year, paid Academy fellowships. The fellows would be nationally recruited for a one-year intensive course on effective teaching methods in mathematics and science. In return, these Glenn fellows would agree to teach for five years in districts with math and science teacher shortages.

And last, this bill would establish industry tax credits and deductions designed to encourage partnerships between schools and industries. Specifically, industries could receive a tax credit for creating summer fellowships for math and science teachers. Likewise, businesses could receive deductions for donating new math and science equipment and materials to our public schools.

By no means is this all we must do. We must also increase our funding for scientific research and development.

In Congress, I have worked to secure additional funds for the National Science Foundation. And in the previous Congress, I offered an amendment with Rep. Obey that would have restored much-needed funding to NSF-the Republican Appropriations bill had made draconian cuts to the agency. Unfortunately, the Republicans raised a point of order against the amendment, so it could not be voted on.

I have also been working in Congress to boost funding for federal health research. Some of the world's most promising health research is being conducted at the National Institutes of Health (NIH). I believe that it is in our nation's best interests to double the NIH research budget over the next five years. This is a time of great progress. However, successful medical research depends on a broad base of research activities involving the physical and social sciences.

Last Congress, I introduced a bill, the "Wilson-Holt Federal Research Investment Act" (H.R. 3161), which would double federal funding for civilian research over a 10-year period, and I introduced an amendment to the House Budget Resolution that would have called for 15 percent increases to the NIH budget over the next four years.

Our nation has accomplished much. And we can achieve a great deal more, but only if we make the education of our children, particularly in science, mathematics and technology education, our priority. As long as I am in Congress, I will remain committed to this goal, but achieving this goal requires the dedication of our entire society.

Rush Holt (D-NJ) represents the 12th Congressional district in New Jersey, a position to which he was first elected in 1998. He sits on the House Committee on Education and the Workforce. He is one of two PhD physicists in Congress, and is a Fellow of the APS.