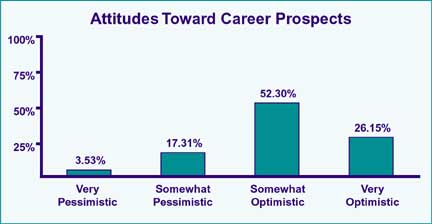 Morale and confidence among physics postdocs are a lot better than three and a half years ago, but there is still significant room for improvement. According to data from a recent APS survey of its junior members, three quarters of the postdocs are satisfied with where they are now in their careers, and a like number would choose the same career path again. More than one quarter described themselves as "very optimistic" about achieving their career goals, and more than half said they were "somewhat optimistic". The fraction who said they were "somewhat pessimistic" was 17 %, while only 3.5% labeled themselves "very pessimistic".

In contrast, in a survey of junior members conducted in October, 1997, 70% of postdocs thought their peer group was pessimistic about career prospects. Statistical data from the current survey are posted on the APS website, while selected results from the 1997 survey were reported in the February, 1998 APS News.

The current survey was inspired by a report issued last fall by the National Academies (see http://www4.nationalacademies.org/pd/postdoc.nsf) that studied postdocs across a range of disciplines, but which concentrated most heavily in the life sciences. Significant problems were found with regard to compensation, benefits, and career issues. The APS survey was designed to find out the extent of similar problems in the physics community. "If we find that our postdocs need help, we want to learn what APS can do to improve the situation," said Judy Franz, APS Executive Officer. The data and the comments from the survey will be analyzed with a view to further APS action.

What emerges from the study is a generally positive picture. The survey was sent to all 1850 junior members of the APS, and responses were received from 286 postdocs. Junior members are by definition within 3 years of their final degree, and not all of them are postdocs, so it is not possible to compute the response rate exactly. A crude attempt to estimate the number of potential respondents places the rate at about 30%, down from 43% in 1997.

Of those who responded, 62% thought their compensation was adequate, although there was keen awareness among the academic group that salaries in industry are much higher, even for those without PhD's. 49% said their benefits were good, and another 40% thought they were adequate. This correlated with the 83% who were satisfied specifically with their health benefits.

But several of the respondents had no health benefits at all. According to one of these, "My fellowship provides some money for overhead, with which the university can cover my health benefits. However, they keep so much for themselves that there is none left for this! I have to pay health insurance out of my own pocket."

Questions on working conditions also elicited largely upbeat responses. For example, 90% said they had sufficient professional interaction with senior group members, and 85% were satisfied with the recognition they were getting. A similar fraction found they had ample opportunity to present their work at scientific meetings. But the statistics didn't always tell the whole story. One respondent said "A combination of DOE travel restrictions and the boss's reluctance to spend travel funds makes it practically impossible to go to any meeting except the March APS meeting." Most respondents (69%) were happy with their opportunities for professional development, but others commented "No advice was given on proposal writing or applying for jobs" , and "My boss writes all the papers and gives essentially all the talks. We should be allowed/encouraged to participate."

In addition to questions on specific issues, respondents were given the opportunity to suggest actions that APS could take to benefit postdocs, and were asked if they had any more general comments to offer. Some of their replies are distilled in the Viewpoint.