Frozen Light: the Tip of the Iceberg

Recent experiments have slowed light, stored light, and even demonstrated the possibility of bringing light to a complete halt and reversing its direction. These experiments now pave the way for a wide-ranging set of applications including new measurement tools in the near term to quantum optical data storage and processing in the more distant future.

In 1967, Hahn and his coworkers used self-induced transparency to reduce the group velocity of light to around c/100. This was startlingly low at the time, but like all records it was quickly surpassed. Today, using electromagnetically induced transparency (EIT) and capitalizing on the ultra-dispersive nature of EIT, it stands near one meter per second.

Last year, a theoretical analysis by Lukin, Yelin, and Fleishhauer, followed by beautiful experiments on the storage of light in atomic vapor, showed that quantum information associated with a light field can be stored for long times and retrieved on demand. Furthermore, within the past year calculations have shown that light can actually be "frozen" or stopped by making use of the Doppler broadening associated with a hot gas.

There are several kinds of velocities associated with optical phenomenon in dispersive media. The phase velocity, v, is the speed at which the nodes of the electromagnetic carrier wave moves. This is defined as v = c / n where n is the index of refraction. But the group velocity, which is the velocity vg of the peak of the electromagnetic envelope or wave packet, is more important for the present purposes. This is usually given by vg=c / ng where ng is the group index, and ng = 1 + wdn/dw where w is the frequency of the light. By making the group index large, on the order of 106 or 107 as in recent experiments, it is possible to slow the velocity of light to a few tens of meters per second.

But there is more to the story. When the index of refraction n depends on the wave-vector k, such as when atoms are moving in a Doppler broadened medium, the correct expression for the group velocity is vg = (c - wdn/dk) / ng. The second term in the numerator is potentially very large, and in this way it is possible to use the thermal motion of the atoms to stop or "freeze" the light.

The plot thickens when one realizes that the ultra-large nonlinearity associated with slow light plays an important role even for very weak light pulses. Harris and Hau showed that nonlinear optical effects are important even at the single photon level. In fact, Lukin, Yelin, and Fleishhauer and Lukin and Imamo-lu showed theoretically that one can control and manipulate the quantum state of pulse with another pulse of light as weak as a single photon. They also showed that it should be possible to store the quantum states of single photon fields in the atomic medium and to read the stored quantum information with nearly 100% efficiency via a pulse applied later in time. Recently Philips and colleagues at the Harvard Smithsonian and Liu and colleagues at the Rowland Institute carried out the first proof-of-principle experiments. Using polaritons, the strong coupling of light and matter in ultra-dispersive media, they demonstrated that quantum memory could be efficiently recorded and read out.

Quantum information theory, quantum computing, quantum dense coding and the like are all potentially exciting applications of these new phenomena. But the time scale for their use is still anybody's guess!

The sense in which light can be said to be "stored" in recent experiments is similar to the spirit of teleporting an atom by transmitting the quantum information necessary to reproduce the original atomic state. The idea of teleportation is that the quantum state of an atom can be imprinted on an electromagnetic field, this field can then be transmitted to another point in space and time, and then the information contained in the light beam can be used to prepare an atom in the original state. All atoms are identical, so we can say that we have teleported the atom from one point to another.

Philips and Liu turned things around in their experiments on atomic coherence. They focused on the fact that it is possible to store the quantum state of a light beam in an atomic medium and then allow the atoms to evolve such that the same light beam can be reconstructed later in time. In this sense the atoms are used to store the state of light.

At Texas A&M University we have demonstrated new results on light transportation (transport of the state of light between different spatial and temporal points via atomic coherence), multiplexing (transfer of a state of light with one frequency and wave vector to another frequency and wave vector), and time reversal (phase conjugation). We use the fact that the atomic center of mass motion allows us to transport the stored information from one point in space to another. Thus, we provide proof-of-principle demonstrations of the tools to teleport light via atomic motion, i.e., the moving atoms carry the information about the light between two spatially separated points.

This technique also enables us to time reverse the incident pulse by extracting its time reversed phase conjugate partner from the stored information. In this sense, our experiments may be viewed as an extension of stimulated photon echo experiments, as originally carried out in two level systems, and more recently generalized to multilevel media and to resonant four-wave mixing experiments in coherent atomic systems. However, the usual photon echo experiments do not involve "photons", i.e., they involve only intense classical fields rather than single photon quantum fields.

Due to the giant non-linear optical coefficients associated with EIT, our experiments are capable of demonstrating nonlinear optical effects at the few-photon level. Furthermore, unlike photon echoes, there is no time delay between the reading and restored pulses associated with the spin restoration in an inhomogeneously broadened medium. The Doppler-free configuration of the fields allows us to reproduce the signal pulse at any moment of time, provided that the spin-coherence survives. Finally, unlike other resonant four-wave mixing experiments, we can spatially and temporally separate the writing fields (which store the information in the atomic medium) from the reading field. Therefore our experiments demonstrate a new facet of quantum coherence.

The world of acousto-optics has always been dominated by the fact that light moves much faster in a medium than sound. But now, ultra-slow light can give us a new lease on life, acousto-optically speaking. For example, stimulated Brillouin scattering in ordinary experiments is only observed in the backward direction because of the need to phase-match the sound and light fields. When ultra-slow light interacts with sound waves and the light velocity equals the velocity of sound in the medium, an anomalous stimulated Brillouin scattering occurs such that the generated sound is strongest in the forward direction and vanishes in the backward direction! Furthermore, using the extreme phase matching made possible by ultra-slow light in a fiber, we can achieve enhanced squeezing via guided acoustic wave Brillouin scattering.

As a second example, it is possible to dramatically increase the efficiency of the ponderomotive nonlinearity driving the atomic media by appropriately detuning the light fields from atomic resonance. Harris has shown that the longitudinal gradient force acting on a two-level atom can be enhanced very substantially via the spatial compression associated with ultra-slow pulse propagation. This enhanced force provides a kind of atom "surfing" and a new kind of local ponderomotive light scattering.

Ultra-slow light is being used in non-linear optical processes. There are many schemes for taking advantage of the enhanced nonlinearities, but in particular we focus on a four-wave mixing double-v scheme in which the ground state coherence is produced by one set of laser fields and a weak signal scatters off this grating, resulting in parametric amplification of the remaining fourth field. Sokolov in Harris' group at Stanford and Hakuta and coworkers in Japan have polished this technique to a fine art. They produce a comb of Raman signals with frequencies extending from infrared well into the deep ultraviolet. In the foreseeable future we expect these techniques to generate Fourier-transform-limited ultra-short pulses.

Recently Hemmer pioneered phase-conjugate nonlinear optics that Zibrov and coworkers have extended to the production of non-degenerate parametric self-oscillation. In this latter context, Harris many years ago suggested the possibility of mirror-less oscillation building up from a vacuum with counter-propagating fields. Recent experiments have demonstrated that the effective phase-conjugation is generated spontaneously by the large nonlinear gain and intrinsic feedback associated with the coherent grating. This type of oscillator has an extremely narrow Schawlow-Townes type line width governed by the group delay of ultra-slow light in the medium rather than the storage time of light in a laser. The group delay is on the order of milliseconds or even seconds, whereas the typical laser light storage time is on the order of microseconds. Thus, the quantum line width of mirror-less parametric oscillators based on coherent grating slow light propagation is already a subject of considerable interest to technologists.

Finally Tombesi et al. have presented a scheme for the complete quantum teleportation of a photon polarization state, made possible by using the ultra-large Kerr non-linearity. With ultra-slow light, their idea can be realized with presently available technology.

Ultraslow light and atomic coherence have already found many new applications in metrology, nonlinear optics at very low intensity, and in the interaction between light and moving atoms. Moreover, the coherence increases the coupling between light fields such that it becomes possible to study the interaction between single photons. It is already possible to store information about light and transport it in space and time, change its frequency, and time-reverse the light's propagation. The time when novel applications in quantum nonlinear optics and quantum information processing through the use of frozen light will fast be upon us. 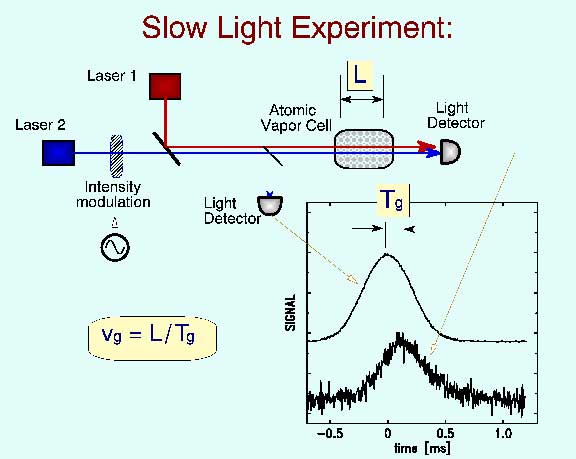