The Mathematics of One Person, One Vote

Article I of the US Constitution states that "representatives and direct taxes shall be apportioned among the several states . . . according to their respective numbers" but offers no specific rule for achieving this goal. The Constitution also requires a census every ten years to ensure that representation stays in line with changing populations. As expected, the 2000 Census numbers show a dramatic shift in population from the urban Northeast to the South and Southwest, and there will be a corresponding shift of twelve seats in the House of Representatives. But what method is actually used to determine this result? The answer forms a fascinating tale that spans two centuries and involves some of the country's greatest statesmen and mathematicians - with the most telling mathematical insights generally supplied by the former rather than the latter.1

Before launching into this story, however, the skeptical reader may be wondering what all the fuss is about. Why not simply compute the exact share of seats for each state (the quotas) and round them to the nearest integers? The difficulty is best illustrated by an example. Consider a federation of three states with a "house" of 21 representatives (see below).

Here ordinary rounding does not work because all three states get rounded down, and thus only 20 seats are apportioned. The earliest proposed solution to this difficulty is due to Alexander Hamilton (1792): round the quotas in the usual way, and if any seats are left over, give them to the states with largest remainders. In the present example, state B, with remainder .41, would get rounded up to 3 seats under Hamilton's method.

Straightforward as this approach may seem, it is fraught with difficulties, as future experience would show. In the meantime, however, Thomas Jefferson (Hamilton's nemesis) argued that the method was fundamentally wrong-headed. The correct approach, said Jefferson, is to choose a common divisor, d, divide it into each state's population, and drop the fractional part of the resulting quotient. The "trick" is to adjust d so that the required number of seats is apportioned. This approach apportions each house size in an essentially unique way, because as the divisor is adjusted downwards (or upwards), exactly one state at a time gains (or loses) a seat, barring improbable ties. Jefferson's solution is shown above with a divisor of 480,000, but any divisor between 484,666 and 454,376 yields the same answer.

Jefferson prevailed over Hamilton in the 1790s debate - not because Congress recognized its mathematical subtlety, but largely because it gave one more seat to Virginia, which at that time was by far the most populous and most important state. Jefferson's method continued in use through the 1830s, even as it came under increasingly bitter attack in Congress because of its blatant favoritism toward large states. (If Jefferson's method were in use today it would give California 55 seats, even though California's quota is only 52.45.)

The evident bias of Jefferson's method ultimately led to its abandonment in 1840, when it was replaced by a method first proposed by the great orator Daniel Webster in 1832. Like Jefferson, Webster began with a common divisor d, but instead of dropping the fractional part of the quotients he argued that they should be rounded in the usual way: above one-half up, below one-half down. As in the case of Jefferson's method there always exists a range of divisors that apportions the required number of seats and does so in a unique way (barring ties).

The methods of Webster and Hamilton were used off and on until 1900, when Webster's approach definitively replaced Hamilton's. The reason was the bizarre behavior of Hamilton's method when the house size changed. In the 1880s, for example, an increase in the house size from 299 to 300 seats would have caused Alabama's allotment to decrease from 8 seats to 7. This so-called "Alabama paradox" led Congress to abandon Hamilton's method - thus showing that intuitive mathematical principles can, at least occasionally, play a role in politics.

It could be objected that, in recent times, the house size has been fixed at 435, and thus the Alabama paradox is no longer relevant. But Hamilton's method also displays unacceptable behavior when the house size is fixed and the populations change. In particular, a state that is gaining population can give up seats to a state that is losing population, a phenomenon known as the "population paradox." For both of these reasons Hamilton's method is unacceptable.

But are there any methods that do better? In fact, there is a large class of methods, of which Jefferson's and Webster's are particular examples, that avoid both paradoxes. All of them are based on the principle of the common divisor invented by Jefferson. To explain how they work, consider a set of state populations p1, . . ., pn and a house size h. Choose a common divisor d and let qi(d) = pi/d be the quotient of each state i. Next select a rounding threshold r(a) between every pair of successive nonnegative integers a and a + 1. If i's quotient falls in the interval a < qi(d) < a + 1 and it exceeds r(a) round it up, otherwise round it down. Finally, adjust the value of d until the rounded numbers sum to h. Each choice of rounding thresholds defines a divisor method.

These methods can be justified in two different ways. On the one hand they are the only ones that avoid the Alabama and population paradoxes. On the other hand, each can be shown to optimize an objective function subject to the constraint that the allocations add up to h and are integer-valued. (In fact, d is the Lagrange multiplier associated with the adding-up constraint.)2

Five divisor methods have played an important role in US apportionment debates: three were proposed by famous statesmen (Jefferson, Webster, and John Quincy Adams) and two by scientists (Joseph Hill, a statistician at the Census Bureau, and James Dean, a professor at Dartmouth). The dates they were proposed, and the associated rounding thresholds that define them, are shown below.

The methods are arranged from left to right so that the rounding thresholds are in descending order: a + 1 > a + 1/2 > [squareroot]a( a + 1) > a(a + 1)/(a + 1/2) > a. Webster rounds at the arithmetic mean, Hill at the geometric mean, and Dean at the harmonic mean. (Jefferson always rounds down, Adams always rounds up.) This ordering has the following implication: consider any two such methods, M and M', and suppose that M lies to the left of M'. If M and M' yield different solutions, then necessarily M gives more seats to larger states and fewer seats to smaller states as compared to M'.

History shows that in fact Jefferson's method strongly favors large states, while Adams's method is biased toward small states. The crucial question is whether any method treats small and large states even-handedly. To examine this question empirically, let us evaluate solutions by each of the five methods in each of the twenty-two censuses from 1790-2000. In each census year we first omit the very small states with quota less than one-half, since these must get one seat in spite of their size. Then we divide the remaining states into three categories: large, middle and small, with the middle category taking up the slack if the number of states is not divisible by three. For each method and each census year, we compute the per capita representation in the large states as a group and in the small states as a group. The percentage difference between the two is the method's relative bias toward small states in that year. Finally, to estimate their long-run behavior, we compute the average bias of each method up to that point in time. The results are shown in the accompanying graph.

Only Webster's is close to being unbiased; in particular the current method (Hill's) systematically favors the small states by 3-4%. These results can be verified rigorously under various assumptions about the probabilistic distribution of populations.

Given these findings, it is remarkable that the current method was adopted in part because some of the country's leading mathematicians - including John von Neumann, Marston Morse, and Luther Eisenhart - claimed that it was unbiased. Indeed in an NAS report to Congress they claimed that Hill's method is to be preferred because it "stands in a middle position as compared with the other methods." (It was fortunate for this reasoning that they were considering an odd number of methods.) Theoretical calculations, buttressed by empirical evidence (which was not considered by the mathematicians), show that on the contrary Hill's method is biased and Webster's is not.

Of course, politics also played a role in the outcome, as it always has: the switch from Webster's to Hill's method in 1941 gave one more seat to Arkansas and one less to Michigan, which essentially guaranteed one more seat for the Democrats (the majority party). It is also true, however, that the scientific arguments bolstered the Democrats' case. Indeed, apportionment debates over the years exhibit an interplay between political and mathematical logic. Jefferson's method was ultimately rejected because of large-state bias, Hamilton's because of bizarre behavior when the house size grew. Changes in method had to wait, however, for the underlying problem to be articulated and for the votes to be in place.

This time around Hill's method happens to give the same solution as Webster's. It might be a propitious moment to correct the situation: no state will be affected now, but the large states can expect to gain in the future. Moreover, the large states have the votes, because in matters pertaining to apportionment, the Senate generally defers to the House, where the large states enjoy a comfortable majority. 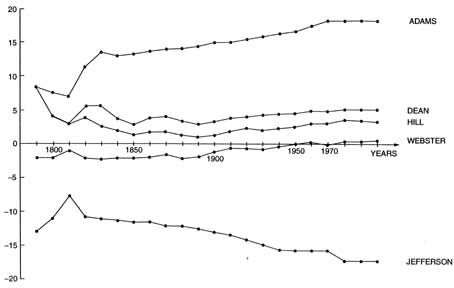 Note: On each curve the point at any census year is the average of the percentage biases of the apportionments of the corresponding method up to and including that year. The number of seats allocated is the actual number that was apportioned. Any state with quota less than .5 is ignored. The remaining states are divided into thirds: large, middle, and small, the "middle" third being slightly larger if the number is not divisible by three. The bias percentage is the percentage by which the small states' representation per capita differs from that of the large states.