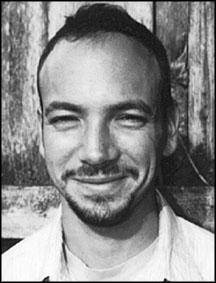 One of the first APS Mass Media Fellows was honored at the annual meeting of the National Association of Science Writers with an award in recognition of his ability to clearly explain complex topics in science. David Kestenbaum, a former staff scientist at Fermilab who is currently a staff writer at Science magazine, received the Evert Clark Award, presented to journalists under the age of 30 who have produced outstanding work in non-technical print journalism.

Kestenbaum won the award on the basis of four articles he wrote as a freelancer prior to his Mass Media Fellowship with the APS. Two appeared in New Scientist, one on the physics of sand and granular materials and the other on atomic clocks. An article on the possible discovery of a leptoquark appeared in New York Times, and R&D Magazine published his investigation on why interest in cold fusion still persists.

Along with Jeffrey Chuang, a physics graduate student at MIT, Kestenbaum was selected as one of the first recipients of the APS Mass Media Fellowship. He chose to spend 10 weeks last summer at a radio station in Columbus, Ohio. "I had the time of my life," he says of the experience. "I have been in love with public radio since I was a kid, but until last summer I hadn't the faintest idea how to put a radio piece together." One of the pieces he produced was recently featured on National Public Radio's "All Things Considered," and he hopes to produce other spots for the station in the future. The APS fellowship proved instrumental in solidifying his desire to pursue a career in scientific journalism, and he joined the staff of Science late last year.

Chuang is currently a PhD candidate at MIT, working in quantum computation theory. He spent his fellowship at the Dallas Morning News, and wrote more than 20 articles including a film review and a story about a strange rotation of the Earth. His editor taught him how to explain complex ideas and keep the reader interested, and he also gained a new perspective on science and the importance of mixing specialization with breadth in science. Unlike Kestenbaum, however, the experience didn't change his career goals: he still plans on a career as a professor at a liberal arts college. "I'll write on the side when I have time," he says. "That's what I thought I wanted to do before the summer, and this has confirmed it."

The APS Mass Media Fellowship was established in 1996 to enable physicists to spend up to three months working in mass media. The program is operated in conjunction with the AAAS Mass Media Science and Engineering Fellowship Program, a successful program that has placed more than 350 fellows with news magazines, newspapers and TV networks in its 21-year existence.