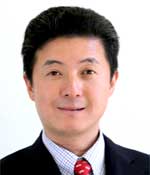 
"For the theoretical prediction and experimental observation of the quantum spin Hall effect, opening the field of topological insulators."


Shoucheng Zhang is the JG Jackson and CJ Wood professor of physics at Stanford University. He received his BS degree from the Free University of Berlin and in 1983, and his PhD from the State University of New York at Stony Brook in 1987. He was a postdoc fellow at the Institute for Theoretical Physics in Santa Barbara from 1987 to 1989 and a Research Staff Member at the IBM Almaden Research Center from 1989 to 1993. He joined the faculty at Stanford in 1993. He is a condensed matter theorist known for his work on topological insulators, spintronics and high temperature superconductivity. He is a fellow of the American Physical Society and a fellow of the American Academy of Arts and Sciences. He received the Guggenheim fellowship in 2007, the Alexander von Humboldt research prize in 2009 and the Europhysics prize in 2010 for his theoretical prediction of the quantum spin Hall effect and topological insulators.