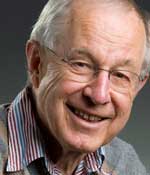 
"For his leadership and innovative contributions to experiments probing the flavor structure of quarks and leptons, in particular for his seminal role in the success of the MINOS neutrino oscillation experiment."


Stanley Wojcicki received AB degree in Physics from Harvard University in June, 1957, and PhD in Physics from University of California, Berkeley, in January, 1962. He has been a member of Stanford University Physics Department faculty since September, 1966, holding currently the title of Professor Emeritus since March, 2010. His professional work covered diverse topics in particle physics, among them discovery of particle resonances in the 1960’s, measurement of CP violation parameters in K0 system, measurement of g-2 of the muon, study of charm production in hadronic interactions and charm particle properties in electron-positron annihilation and searches for rare K0 decays. During 1984-1989 Wojcicki served as Deputy Director of the SSC Central Design Group. Most recently he has worked on neutrino oscillations with the MINOS experiment of which he was the founding member and its spokesperson for its initial 15 years. Wojcicki was Alfred P. Sloan Foundation Fellow (1968-1972) and John Simon Guggenheim Fellow (1973-1974). He received Dean’s Distinguished Teaching Award in 1979, Alexander von Humboldt Senior American Scientist Award in 1980, Bruno Pontecorvo Prize in 2012 and Commonwealth Club William K. Bowles, Jr Lifetime Achievement Award in 2013. He is a Fellow of American Physical Society and in 2014 was elected Foreign Member of the Polish Academy of Arts and Sciences.