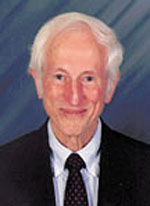 
"For his research contributions in experimental nuclear physics, including the precise measurement of reaction cross sections for exotic light nuclei, and for his active and enthusiastic collaboration with Oberlin students."


Dr. Warner is the Donald R. Longman Professor of Natural Science at Oberlin College. He received his B.Sc. from Antioch College in 1954 and his Ph.D. from the University of Rochester in 1959. He held faculty appointments at Rochester, Antioch, and the University of Manitoba before joining the Oberlin faculty in 1965. He recently served as Visiting Professor and Master Teacher at the University of Michigan. His sabbaticals have been at Oxford University (as an NSF Postdoctoral Fellow), the National Superconducting Cyclotron Laboratory (NSCL), Notre Dame, and the Kernfysisch Versneller Instituut (KVI) in Groningen, the Netherlands.

Dr. Warner and two Manitoba undergraduates were the second group to observe bremsstrahlung production in p-p collisions. Since coming to Oberlin, he and his students have done experimental nuclear physics using accelerators at NASA-Lewis, Chalk River, IUCF, NSCL, Notre Dame, KVI, Osaka (Japan), and Uppsala (Sweden). For many years he studied the cluster structure of light nuclei through knockout reactions.  He now concentrates on measuring total reaction cross sections of radioactive nuclei and interpreting them with microscopic models. His publications list 31 undergraduate coauthors, including 2 on his 100th paper, published this year. His research at Oberlin was continuously supported by NSF for more than 30 years.

Dr. Warner is a member of the APS (Division of Nuclear Physics), AAPT, and Sigma Xi and has served on the NSCL Users Executive Committee. He sings in the Cleveland Orchestra Chorus and is a member of their operating committee.